With the start of the new year, it's time for trademark owners again to be on guard against solicitations and advertisements that may appear to be "official" or look like invoices.  It is prudent to warn your bookkeeping departments to be alert to these types of solicitations and not mistake them for invoices.  Please post a comment below if you have received solicitations that you found to be confusing.

I was recently contact by the recipient of two documents with respect to a trademark and asked whether or not these "invoices" should be paid.  On closer inspection, neither document was an invoice and both were solicitations for services which, because of the format, the recipient mistook for invoices.

The first (seen below) solicits for payment of a "registration fee" for the service of publishing the registered trademark in the solicitors index. 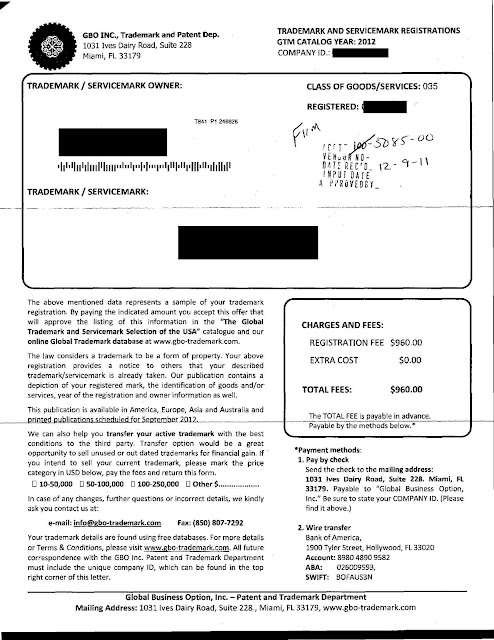 This format was confusing to the recipient since it looked like an invoice rather than a more traditional form of direct mail advertising, such as a brochure, for example.  After you get past the format and the solicitation for a "registration fee," the text of the document, however, expressly provides that the service offered is that of publication of the trademark in the solicitor's catalogue.  The only indication of the value of this service is that it provides "a notice to others that your described trademark/servicemark is already taken."  The risk here is that recipients who are not well versed in trademark registration or protection may be mislead to think that such a notice is somehow required and simply pay the invoice.

While the solicitation did not contain a phone number for the company, it did contain a URL for the company's website which expressly identifies itself as "a U.S. based privately owned trademark and patent firm." I suspect that changing the format and including this language on the mailing would help avoid confusion.

Another solicitation (seen below) received by the same recipient, was on its surface, quite a bit more confusing.

In this case, the name of the organization, "United States Trademark Registration Office, Trademark Registration and Monitoring Division," lead the recipient to believe that this came from an official governmental agency.  For the record, New Jersey law makes it unlawful to operate under a name that implies association with a state of federal governmental agency. See  NJSA 56:8-2.1.

The other confusing aspect of this solicitation is that it is appears to be an invoice.  This is especially evident from the listing of the $375 fee as being "DUE NOW."  However, at least this company offers a more potentially valuable service.  Specifically, for the $375 fee, the company will register your trademark with US Customs and Boarder Protection (CBP), notify you when your goods are blocked and send reminders to you when its time to file maintenance and renewal filings with the USPTO.  However, the CBP only charges $190 for the registration and is then obligated by regulation to provide the trademark owner with notice when goods are block.  Moreover, in this case, the recipient's mark was a service mark so registration with the CBP was unlikely to have any meaningful value.

The moral of this story is to read all such material carefully before paying anything that appears as an invoice.  In each of these cases, a careful reading of the material reveals that these are not from governmental agencies and not mandatory purchases.

CBD May Be Legal, but Challenges Still Persist in Obtaining CBD Product Trademark Registration
By
Gene Markin
TTAB Issues Precedential Decision Affirming Unlawful Use Refusal of Trademark Registration for Ingestible CBD Supplements Based on Food, Drug and Cosmetics Act
By
Kara Thorvaldsen
The Scope of Online Reviews in Litigation Continues to Evolve
By
Ashish A. Pradhan
Cybercriminals Are Beginning to Master the Exploitation of Public Entities
By
Colin R. Jennings
Advertisement

Kurt's practice focuses on technology and intellectual property. He counsels clients in the following areas:

In the area of business...