A ransom note, UNLOCK_FILES.793DF82AFCB81B75.txt, appeared on computers throughout a company and when triaging what happened, encrypted files were observed. The ransom note (shown below) gave specific instructions as to what was happening, details on how to resolve the problem and a link where to contact them. 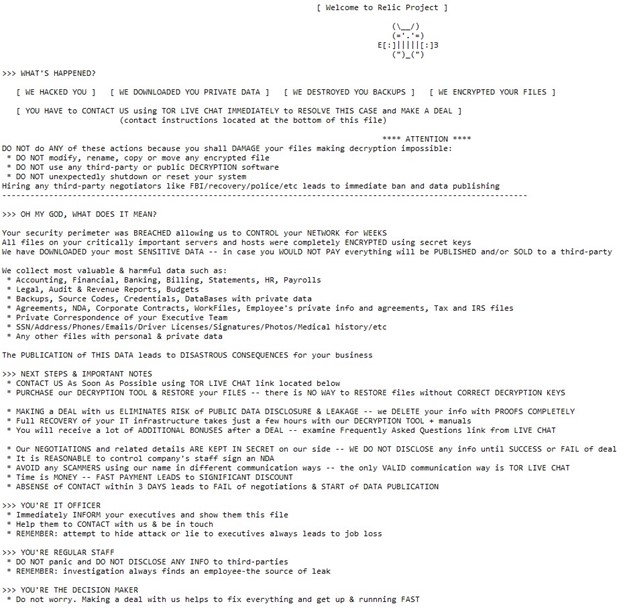 A typical ransomware response was initiated, and forensic analysis was completed. An unpatched FortiGate appliance, which controlled Remote Desktop Protocol (RDP) access for users, was found to be the likely entry point into the environment.

This vulnerability allows any user to connect without having to authenticate, allowing access and granting administrator privileges. This access was leveraged and a user account was created that had a similar name to that of a legitimate administrator account. PSEXESVC was executed which let users execute processes on remote systems without the need to have any kind of client software present on the remote computers. The threat actors used RDP to find the domain controller which became the hub of their activity.

Cobalt Strike was executed which has the ability to create connections (using Cobalt Strike servers) to compromise networks and create persistent channels between the target and the attackers. In this instance "Cobalt Strike” was renamed “rsmvc.dll” which was run from the domain controller. Also, “klink.exe” was executed on the domain controller which is a free telnet/ssh client for Windows. Connections to most systems in the environment was done via RDP.

Scheduled tasks were created to automate the ransomware deployment but that too was unsuccessful. As the ransom note and encrypted files were discovered, the threat actor was blocked. Some files were encrypted but a large majority were not.

After a few weeks, they had their “shame” active and had posted victim data. All victim data that was posted appeared to be from current victims. There was no historical data as is observed with other sites.

Christopher “Todd” Doss is a Senior Managing Director at Ankura with more than 35 years of experience in law enforcement. Todd is a senior executive with proven ability to lead global security, criminal, counterterrorism, counterintelligence, cyber, and intelligence operations in high-risk, complex environments. He links results-oriented solutions to critical incidents worldwide by partnering and collaborating and building global teams to effectively address complex and politically challenging investigations. He also develops and presents strategies for effective...

Brent Riley is a Managing Director at Ankura and is based in New York. Brent specializes in cybersecurity, incident response, digital forensics, and expert witness testimony. He has 12 years of law enforcement and over eight years of digital forensics and cybercrime investigatory experience.