HRH Prince Charles’ former butler has had his application to register a “Royal Butler” logo as a UK trade mark denied by the UK Intellectual Property Office following a successful opposition by Lord Chamberlain, on behalf of Her Majesty the Queen. A full copy of the decision can be found here.

Following the recent media coverage regarding the various brand names used and trade marks filed by the Duke and Duchess of Sussex, known to many as “Harry & Meghan”, this decision is a timely reminder that UK trade mark law restricts the registration of names, brands and logos which may mistakenly suggest Royal patronage.

Grant Harrold, who was a butler in the Royal Household from 2005 to 2011, intended to launch a business under the “Royal Butler” trade mark. The business included an etiquette and butler training school, which he ran with HRH Princess Katarina of Yugoslavia and Serbia as its patron.

The trade mark in question was a gold lion wearing a crown, with THE ROYAL BUTLER underneath (see below). 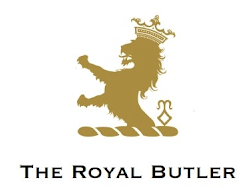 When examined by the UKIPO an objection was raised on the grounds consumers might mistakenly think there was a connection with Royalty, and Mr. Harrold’s trade mark contained a specifically protected emblem. The argument was that although the lion in Mr. Harrold’s logo and the Royal Arms weren’t identical, they were similar enough to cause confusion.

The objection was overcome in 2019 on the basis that “the Royal Butler” would be taken to indicate a fictional character, and therefore the public would not be confused as to whether the trade mark was connected to Royalty.

However, Lord Chamberlain filed an opposition on similar grounds.

(1) the trade mark contained a specially protected emblem
(2) it gave the impression of a royal connection, and
(3) was prohibited by any enactment or rule of law.

Mr. Harrold provided a number of arguments in response, which included that:

On 24 August 2020 Mr. Harrold’s application was refused in full. The Hearing Office found that there were enough similarities between the lions in his trade mark and the Royal Arms to suggest a royal link. These similarities did little to counteract the connection suggested by the title “The Royal Butler”, as the public knows the Royal household employs butlers, and attaches importance to correct royal etiquette. HRH Princess Katarina could not give consent because she was not a member of the British Royal family, and, despite his claims to the contrary, there was no evidence Mr. Harrold had been given verbal permission to use the mark.

Mr. Harrold can still appeal the decision, but has not yet done so. However, he does continue to use (for now) “The Royal Butler” – just not being protected as a trade mark.

This case emphasizes that UK trade mark law restricts the registration of names, brands and logos which may mistakenly suggest Royal patronage. Although approval is not necessarily required for every trade mark with the word “Royal” in relation to any goods or services (e.g. “Royal Flush” for cloths pegs, where the public would never take the mark to indicate Royal patronage or consent). Royalty, and connections to Royalty, are protected in the UK, and are not for unauthorized commercial use.