Sessions, Oprah, Obama but not the Russians in Trump’s On-Going Twitter War

On February 20, 2018, DNC deputy communications director Adrienne Watson responded to a recent series of tweets by President Trump.  Last week’s Russian election meddling indictments renewed the debate about whether Obama did enough to counter Russian interference when he was in office.

After continued criticism about how he is handling Russia’s meddling in the 2016 Election, President Trump took to Twitter. Watson details Trump’s tweets from his attacks on Oprah, down to the Pennsylvania redistricting map. Trump’s tweets from last week and even today, included no mention of prevention of future Russian attacks on US elections, he did not condemn the Kremlin’s attack of the 2016-Presidential and he adamantly denies that the Mueller investigation will or has uncovered any unsavory connections between him and the Russians.

Why Doesn’t Sessions Go After Obama for the Russian Meddling?

On February 21st Trump lashed out at Attorney General Jeff Sessions,  asking why he isn’t investigating the Obama-administration for being weak in the face of Russian aggression.

Pressuring Sessions to investigate Obama’s knowledge of Russian involvement is somewhat awkward because Session’s involvement with Russian government officials was investigated by the Department of Justice in March 2017.  Sessions stated during his confirmation hearing in January 2017, that he “did not have communications with the Russians.” It was later determined by the Justice Department that he met with Russian ambassador, Sergey I. Kislyak twice in the preceding 12 months.

Sessions clarified the apparent disharmony between his sworn confirmation testimony and the two meetings with the Russian ambassador by stating that he “never met with any Russian officials to discuss issues of the campaign.”

The President seemed to forget that Sessions recused himself from the Russian investigation in June 2017.  “I recused myself not because of any asserted wrongdoing on my part during the campaign,” Sessions stated. “But because a Department of Justice regulation, 28 CFR 45.2, required it.”

What did the Obama Administration Know and When?

From the Mueller indictment, we now know that in 2015 the Russians purchased advertisements on social-media sites designed to influence public opinion, but it remains unclear whether the F.B.I. or any other intelligence agencies were aware of the purchases and other election interferences in real time.

By the summer of 2016, U.S. intelligence agencies had collected a “critical mass” of data about Russian efforts to intervene in the election. This prompted John Brennan, the then director of the C.I.A., to brief Obama and other top advisers in August about the threat.  But President Obama and his advisors didn’t learn of the extent of the Russian inference, including the use of fake personas online, or that the Russians were exploiting Facebook and other social-media sites until after the 2016 elections former administration officials said. “We knew some things, but didn’t have all the pieces,” a senior official said, referring to Obama's final weeks in office.

Who is Tougher on Russia?  It Depends on Who You Ask.

From the beginning, President Trump has vehemently denied that his campaign and administration had any knowledge of Russian meddling in the election.  As detailed in his tweets, he also continues to state that the current administration has been “tougher on Russia than Obama.”

Although the President claims the Obama administration didn’t take proper actions against Russia, Obama did make strides towards imposing sanctions against Russia, with a major retaliatory measures coming after the 2016 Election, when the Obama Administration expelled 35 Russian diplomats accused of interfering  with the Presidential Election, sanctioning three companies and also closing two Russian diplomatic offices in the United States.

Trump has yet to impose sanctions against the Russians, after the overwhelming passage of the Countering America's Adversaries Through Sanctions Act by Congress last year. The sanctions were to take effect on January 29th.  The law gives the administration the power to target powerful Russian elites and companies and countries that do business with blacklisted Russian military and intelligence entities.  The administration also failed to meet a deadline to identify Russian entities and individuals which would be added to a sanctions list. Instead, the Administration published a list of 96 known prominent Russian Oligarchs, as noted on Twitter by Tom Parfitt Moscow Correspondent at The London Times. 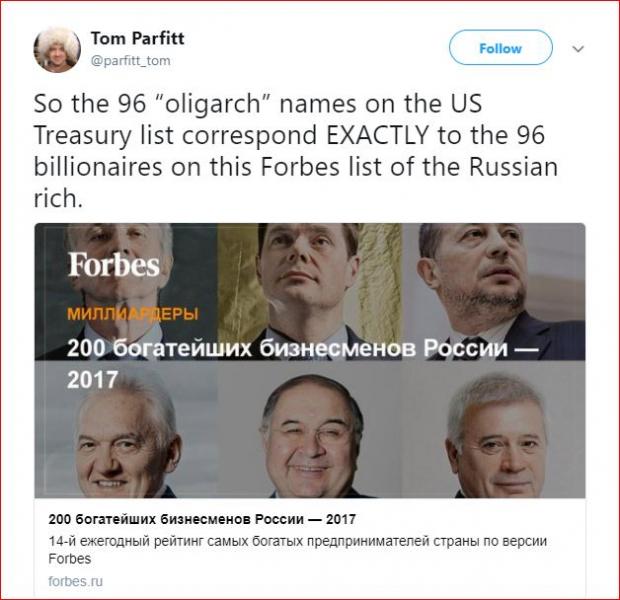 Treasury Secretary Steven Mnuchin said February 14 that the Trump administration is "actively working" on imposing sanctions on Russia over its interference in the 2016 US election.  And on February 20th, White House Press Secretary Sarah Sanders stated that Donald Trump "has done a number of things to put pressure on Russia and be tough on Russia." We’ll have to see what’s coming and maybe we’ll find out exactly what Trump has done to put pressure on Russia, monitor Twitter.

Jennifer Schaller, Esq. is the Managing Director and co-founder of the National Law Review on-line edition.  Prior to the National Law Review, Jennifer most recently served as in-house counsel/director at CNA Surety. She also served in various marketing and business development roles as a vice president of Aon Services Group.  Jennifer started her legal career as an associate attorney with Smith Amundsen, LLC .

Jennifer was the Chair of the Chicago City group of the Legal  Marketing Association (LMA) in 2019,  and in  2016-18, was the Vice Chairman Managing Programming in Chicago...