On February 20, 2020, the Centers for Medicare & Medicaid Services (CMS) released a proposed rule on the Comprehensive Care for Joint Replacement (CJR) model. CJR was the first mandatory Innovation Center alternative payment model (APM); initially launched in 2016. The proposed rule would make several revisions to the CJR model, including:

CJR is an inpatient episode-based payment model focused on hip and knee joint replacements. This five-year model was implemented in 67 metropolitan statistical areas (MSAs) on April 1, 2016. For the 2017 Quality Payment Program, a CJR Track 1 CEHRT model was established as an Advanced APM. When Tom Price became Secretary of the US Department of Health and Human Services, he scaled back the mandatory component of the model, reducing the 67 original MSAs to 34, and offering a one-time opt-in option for voluntary participation in the remaining 33 MSAs.

CMS has touted CJR as a promising model that has reduced Medicare payments while maintaining quality. An analysis of the first two years of the program found that average episode payments decreased by 3.7%, mainly as a result of changes in post-acute care use (although CMS acknowledges in the proposed rule that national healthcare delivery data indicates that changes in post-acute care use preceded the implementation of CJR).

Key proposals and requests from the proposed rule include the following:

1. Extending the length of, and maintaining mandatory participation in, the CJR model by three years, through December 31, 2023, for certain participants

2. Expanding the definition of an “episode of care” to include outpatient procedures

3. Modifying the calculation of the target price to increase precision, which CMS estimates could result in savings for the Medicare program

5. Soliciting comments on the design of a LEJR bundled payment model for ASCs.

Model Overview: CJR participant hospitals are financially accountable for the quality and cost of healthcare services during an episode of care. The CJR model bundles payment for LEJR replacement episodes across all inpatient hospital services, physician services, post-acute care services, and any readmissions or other related services through 90 days after the initial hospital discharge. At the end of each performance year, actual episode payments are compared to the hospital’s quality-adjusted target price. Hospitals can earn a reconciliation payment if episode payments are below their target price, and, as of 2017, hospitals with episode payments above their target price must repay Medicare.

The first performance period of the CJR model began on April 1, 2016. The model was originally designed to run five years (through December 2020). In this rule CMS is proposing a number of changes to the model. To allow time to evaluate the impact of these changes, CMS is proposing to extend the CJR model for an additional three years (performance years 6 through 8). This extension will only apply to participant hospitals located in the 34 mandatory MSAs (except for rural hospitals and low-volume hospitals).

Key Takeaway: Definition of episode of care expanded to include outpatient procedures

In response to recent Medicare policy changes which allow for Medicare coverage of LEJR procedures in the outpatient setting, CMS is proposing to expand the definition of the CJR model episode of care to include outpatient procedures.

The CJR model is focused on LEJR procedures, including total knee arthroplasty (TKA), total hip arthroplasty (THA) and total ankle replacement (TAR). The CJR model episodes were defined to include inpatient procedures only because when the model was first established in 2016, Medicare only covered these procedures in the inpatient setting. These procedures were mapped to either MS-DRG 469 (LEJR with complications and/or comorbidities) or MS-DRG 470 (LEJR without complications and/or comorbidities).

As a result of this policy change, CMS proposes to include TKA and THA procedures performed in the outpatient setting in the CJR model’s episode definition. This change would include procedures furnished on or after October 4, 2020, because the 90-day episode would end on or after January 1, 2021, the first day of performance year six.

CMS proposes a site neutral payment based on a blend of inpatient and outpatient episodes, and the application of an episode-based risk adjustment. Based on CMS’s analysis of one year of claims data for outpatient TKA procedures, the agency believes that the proposed approach would incentivize clinicians to perform the procedures in the appropriate clinical setting. According to CMS, the risk adjustment would help account for differences in cost for more medically complex patients who are more likely to be treated in the inpatient setting and may use more post-acute care resources. Although claims data is not available for outpatient THA procedures, CMS believes these costs would be similar to TKA costs.

Key Takeaway: Modifications to increase the precision of target prices, expected to result in savings for the Medicare program and modest increases in reconciliation obligations for participating hospitals 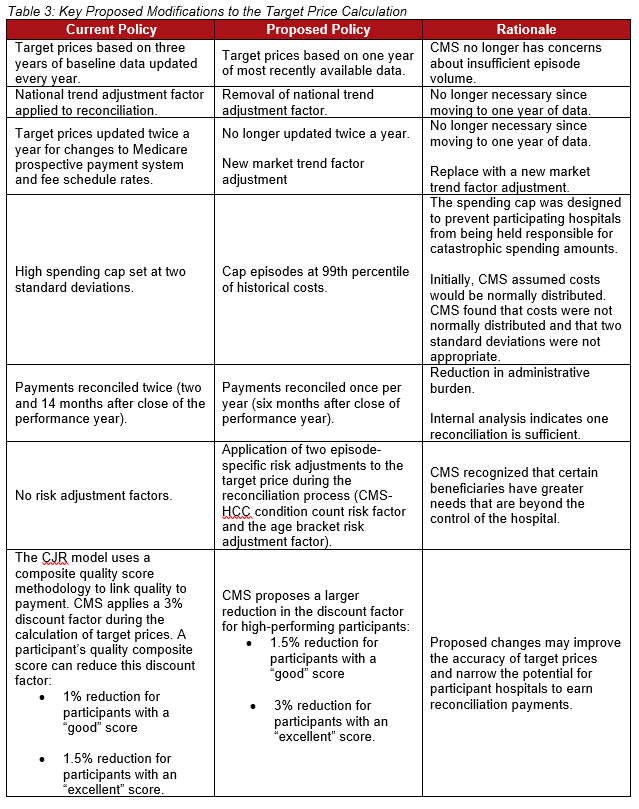 CMS proposes to apply episode-specific risk adjustments to the target price during the reconciliation process for performance years six through eight. CMS indicates that the risk adjustment’s purpose is to account for beneficiary factors other than the presence of a hip fracture.

CMS proposes to use two patient-level risk factors: the CMS-HCC condition count risk factor and the age bracket risk adjustment factor. CMS-HCC takes into account the total number of clinical conditions per beneficiary. It is similar to an approach used in the Medicare Advantage program. The age bracket risk adjustment is meant to account for average anticipated episode costs associated with the beneficiary’s age.

CMS anticipates that risk adjustment factors will increase accuracy in setting and adjusting target prices. Participants have indicated to CMS that accurate target prices increase the financial predictability of participating in the model.

CMS also seeks comments on the use of other risk adjustment variables, such as dual eligibility.

In CJR and many other CMS-sponsored payment models, the hospital is the entity held financially accountable. In this proposed rule, CMS seeks input on how an ASC-focused model could better recognize the role of surgeons and clinicians, and whether there are ways to model the reconciliation payment and/or repayment obligation between the facility and rendering surgeon to better encourage collaboration.

CMS also welcomes feedback on whether the model should be ASC specific or site neutral. If the model was site neutral, the payment would be the same no matter where the procedure was performed (e.g., inpatient, outpatient or ASC). CMS is also interested in feedback on the types of quality measures that should be used for the ASC setting.

While the number of physicians participating in Advanced APMs under the Quality Payment Program continues to increase, CMS is under significant pressure to increase Advanced APM opportunities for physicians and other clinicians. Expansion of these type of models into the ASC and other outpatient settings may be a way to achieve this goal.

More information on the CJR model can be found here.

Sheila advises clients on a wide variety of Medicare payment and regulatory issues. With more than 10 years of experience, Sheila is highly skilled in the areas of Medicare physician and hospital outpatient payment, Medicare quality programs, and the establishment and valuation of CPT® codes. Sheila has a deep understanding of emerging technology’s impact on Medicare reimbursement. She has facilitated relationships and discussions with physician specialty societies and industry stakeholders, helping to develop mutually beneficial collaborations. Sheila also has guided...