This weekend the Stoneman Douglas community rallied in Florida, grieving over Wednesday's attack in Parkland which was the deadliest US school shooting since 2012.

President Trump making the connection between the FBI, Russian Investigation and the Parkland shooting:

The FBI dropped the ball focusing on the Russian hoax, the Democrats are at fault, or maybe it was the 400-pound genius sitting in his bed who is responsible for it all, after all, he is a genius and has a computer!

At the Parkland rally, 18-year-old Marjory Stoneman Douglas High School student Emma Gonzalez reading from the back side of her AP Government notes:

"All these people should be at home grieving," she said. “But instead we are up here, standing together, because if all our government and president can do is send ‘thoughts and prayers,’ then it’s time for victims to be the change that we need to see."

Gonzalez also had a message specifically for President Donald Trump:

"If the president wants to come up to me and tell me to my face that it was a 'terrible tragedy,'" she said, "I'm going to happily ask him how much money he received from the NRA."

"It doesn't matter because I already know. Thirty million dollars," the 18-year-old said.  ​​

(Recording of Ms. Gonzalez courtesy of CNN via UTube.)

According to the Center for Responsive Politics, no politician benefited more from the NRA’s 2016 election spending than Donald Trump. The NRA spent over $30 million in support of Trump’s candidacy — or more than its combined spending in all races during the 2008 and 2012 presidential election cycles, which include 45 Senate and 145 House races. 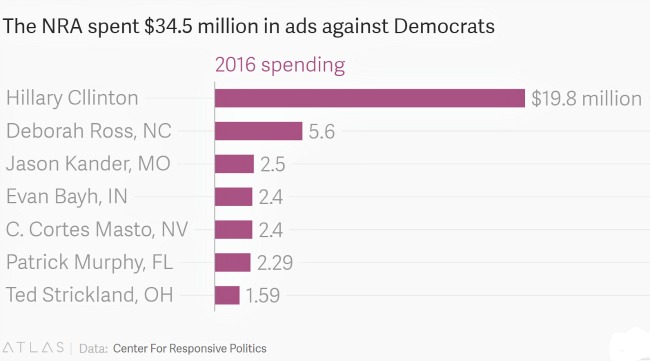 (as summarized by the Atlas.com)

“Because of these gun laws, people I love have died,” said Delaney Tarr, a 17-year-old student.  “Where’s the common sense in that? People are dying every day.”

18-year-old Stoneman Douglas student Ryan Deitsch, who hid in a school toilet during the attack, urged lawmakers address gun ownership.  “The least lawmakers can do is vote on something. What’s the worst that can happen?”

President Trump will host students and teachers for a listening session Wednesday, according to to the White House schedule.  The White House has not yet announced which students would be attending the session.  It was also announced that Trump will meet with state and local officials on school safety on Thursday.

These gun rage tragedies may have one positive outcome:  they are highlighting the intellect, passion and drive for change by a group of informed and motivated Stoneman Douglas students.

The students are organizing a March for Our Lives March 24th as reported on "This Week" Co-Anchor Martha Raddatz today.   Razzadt interviewed Stoneman Douglas students: Cameron Kasky, Emma Gonzalez, David Hogg, Alex Wind and Jaclyn Corin.  The students stated that they are determined to use protests and political action to make the mass shooting at Marjory Stoneman Douglas in Parkland, Florida, a turning point in the national debate over gun control.

“People are saying that it’s not time to talk about gun control. And we can respect that,” according to Kasky during the "This Week" interview. “Here’s a time. March 24th in every single city. We are going to be marching together as students begging for our lives.”

“Any politician on either side who is taking money from the NRA is responsible for events like this,” the high school junior said of the shooting on Feb. 14 that killed 17 students and teachers at the school. “At the end of the day, the NRA is fostering and promoting this gun culture.”

Kasky said the point is to "create a new normal where there's a badge of shame on any politician who's accepting money from the NRA.”

Jennifer Schaller, Esq. is the Managing Director and co-founder of the National Law Review on-line edition.  Prior to the National Law Review, Jennifer most recently served as in-house counsel / director at CNA Surety. She also served in various marketing and business development roles as a vice president of Aon Services Group.  Jennifer started her legal career as an insurance coverage attorney with Smith Amundsen, LLC in Chicago, IL and in risk management at various insurance organizations.

In 2019 Jennifer was the Chair for the Chicago City group of the Legal  Marketing...