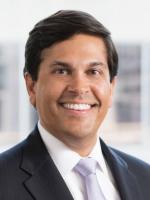 Anand Ramana is a Litigation Shareholder in the Firm’s Washington, D.C. Office, and is also a Member of the Firm’s Pro Bono and Diversity Committees.

Mr. Ramana resolves a wide variety of business and other civil disputes for his clients. He has significant first-chair trial and appellate experience in state and federal courts around the nation, with a particular focus in the District of Columbia and Virginia tribunals. As lead counsel, Mr. Ramana has tried nearly 20 jury and bench trials to judgment, and argued 10 appeals

While he handles disputes for all businesses, Mr. Ramana dedicates a large portion of his practice to litigation on behalf of, and many times between, government contractors. He is a leading authority on proposal teaming and post-award subcontracting issues. Over the course of his career, he has successfully tried or otherwise favorably resolved employment, trade secret, restrictive covenant, contract, and business tort cases. He also has significant experience litigating disputes in the energy, financial services, consumer, and real estate industries.

Mr. Ramana also represents foreign companies, governments, and individuals in litigation in American courts. He is well-versed in the legal nuances that foreign parties, witnesses, and evidence present in American litigation. Indeed, he has substantial experience in helping European and Middle Eastern clients and executives understand, navigate, and prevail in the American legal system.

Mr. Ramana devotes a significant segment of his career to his pro bono practice. His pro bono successes include securing a writ of habeas corpus for the release of an innocent man serving time in prison on the eve of his unlawful deportation, forcing the return of two kidnapped children secretly taken to Saudi Arabia, and obtaining a reversal of immigration judge’s deliberate disregard of integral portions of the record to reach a decision to deport a persecuted man. More recently, he helped supervise a large pro bono team that obtained a historic $8 million civil judgment in a nationally-recognized anti-human trafficking suit against a cult based in Kansas.