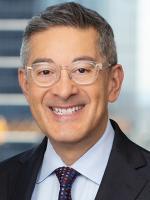 Mr. Pacheco is a former President of the Los Angeles Board of Police Commissioners. His responsibilities as the highest ranking official with the Los Angeles Police Department included oversight of all aspects of the Department including its $1.3 billion budget, officer-involved shootings, and in-custody deaths. He spoke extensively in the media and to community groups on issues concerning policing in Los Angeles. Mr. Pacheco’s contributions are still recognized to this day, and he continues to advise the Department in different capacities.

Mr. Pacheco has consistently been identified by his peers as one of the Best Lawyers in America from 2009–2021 in the field of White-Collar Criminal Defense and as a Southern California Super Lawyer from 2007–2021, including being named a Top Rated White Collar Crimes Attorney in Los Angeles. In 2020, the Los Angeles Business Journal recognized Mr. Pacheco as a Top Minority Attorney.

Mr. Pacheco has partnered with the Los Angeles School Police Department to host lunches and field trips for hundreds of children from elementary and high schools in South Los Angeles. He is an organizer and a co-sponsor of events for Para Los Niños, responding to the needs of underserved children and families. Mr. Pacheco participates in and contributes to gift giveaways with the Los Angeles Police Department during the holidays.

Mr. Pacheco is pro bono counsel to Public Counsel’s Center for Veterans’ Advancement where he coordinates and handles upgrade discharge requests, so that veterans can get services and recognition that they deserve.

Articles in the National Law Review database by Anthony Pacheco