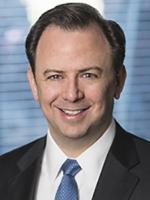 Scott Kieff is a Principal in McKool Smith's Washington, D.C. and Silicon Valley offices. He joined the firm in December 2017, after almost 25 years in the private, government, and academic sectors performing complex problem solving at the intersection of technology, markets, and law. Scott served as Commissioner of the U.S. International Trade Commission from October 2013 through June 2017.

Scott focuses on helping business clients facing serious competitive or regulatory threats and opportunities to achieve sustainable real-world solutions.  He has extensive experience in high-stakes litigations and investigations, often integrating diverse fields of law to accomplish clients’ business objectives, such as when antitrust, false advertising, or other unfair competition claims are brought in the Section 337 docket of the U.S. International Trade Commission, or when strategies implicate multiple areas of law and many courts and agencies, including those in multiple countries.  Scott’s subject matter expertise includes intellectual property; international trade; antitrust; finance; securities regulation; bankruptcy; biotechnology and medicine; cyber; privacy; and security.  His practice spans trials, appeals, regulatory agencies, investigations, and structured transactions on behalf of one side of a matter, as well as neutral work as a mediator, arbitrator, special master, and compliance monitor on behalf of both sides or on assignment by an adjudicative or investigative body. Scott’s work extends across global value chains for both tangible and intangible assets, including finance, and includes many foreign legal regimes as well as many international treaties and organizations.

Scott’s neutral work as a mediator, arbitrator, or external advisor or compliance monitor is especially suited to complex matters. He helped build and for several years served as a mediator in the U.S. Court of Appeals for the Federal Circuit’s mediation program to offer mediation options for all of the appeals in patent cases across the country. Scott helped build the ethics, conflict-of-interest, and anticorruption program for a multi-hundred-million-dollar, multi-agency-funded set of grants that financed an entire field of heavily regulated biomedical scientific research for many years. He served as an external advisor to help stand up and for many years guide the enterprise-wide privacy and civil liberties compliance program for a team numbering in the tens of thousands running heavily regulated cyber operations worldwide. Scott’s neutral work relies on the power of ideas, collaboration, and an engineering problem solving approach, building on his extensive experience with committee or en banc deliberations.

Scott maintains his academic posts as Fred C. Stevenson Research Professor at George Washington University Law School and as a Senior Fellow at Stanford University’s Hoover Institution. He previously taught at Washington University in Saint Louis, where he was a Professor in the School of Law with a secondary appointment in the School of Medicine’s Department of Neurological Surgery. Scott has held various visiting faculty or faculty fellow positions including in the Munich Intellectual Property Law Center at Germany’s Max Planck Institute, in the law schools at Northwestern, Chicago, and Stanford, and in the Olin Program on Law and Economics at Harvard.