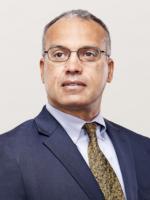 Frank has managed patent enforcement activities for clients in the United States, Europe, and Asia. He is involved in all phases of patent litigation in more than 50 cases, including worldwide discovery efforts, claim construction, motion practice, conducting depositions, and examining witnesses before a jury. He is also lead counsel in inter partes review proceedings before the Patent Trial and Appeal Board (PTAB).

Frank often presents at CLE programs on U.S. patent litigation practice, patent standards, patent pooling, and due diligence for patent matters. He also speaks at programs for engineers and engineering students on intellectual property legal issues. He has served on the firm’s management and compensation committees and served as leader of the firm’s electrical and computer technology practice group that consisted of more than 100 lawyers.

Frank was recognized in Intellectual Asset Management’s Strategy 300 as a top IP strategist, and by The Legal 500 U.S. as one of the leading lawyers in patent licensing and transactional work. Legal Media Group has ranked him among top U.S. patent lawyers since 2011. He was selected by On Being a Black Lawyer to be featured in The Power 100 as one of the 100 most influential black attorneys in the United States.

Articles in the National Law Review database by Frank A. DeCosta, III, Ph.D.