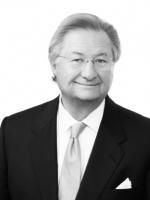 George J. Fowler, III, is a partner in the Maritime Practice Group, where he focuses on litigation, arbitration, and dispute resolution.

George Fowler is an internationally recognized trial lawyer known for his successful record trying hundreds of cases to juries and judges, including numerous high-profile matters, complex litigation, and cases of national concern.

George has written and lectured extensively on private international law and world trade and is active in promoting trade and investment for the City of New Orleans. He speaks frequently and has appeared regularly on national television, where he provides commentary and insights on issues involving Cuba and US-Cuba relations.

Committed to promoting educational opportunity, George is the founder, chairman emeritus, and a current board member of the New Orleans Hispanic Heritage Foundation. Under his leadership, the organization has awarded more than 800 scholarships to Latino students.

He is also deeply involved in human and civil rights issues and has represented a number of clients in matters involving police abuse in New Orleans, negligent treatment of individuals by US authorities, and violations of human rights in Cuba and elsewhere.

Born in Havana, Cuba, George became a refugee in the United States at the age of 10. For the past 20 years, he has been pro-bono general counsel of the Cuban American National Foundation, the largest Cuban exile organization in the world. During his tenure, he has worked to have the Cuban dictator indicted for crimes against humanity, genocide, and violations of human rights in various countries, including the United States.

He has written extensively on this issue and appeared numerous times on radio and TV shows speaking on the subject. George is also active with the Foundation for Human Rights in Cuba, an organization devoted to supporting the dissident movement in Cuba and aiding Cubans who make it to the United States.

George is fluent in Spanish and French.