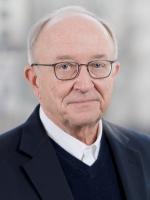 John focuses his practice on civil trial and appellate litigation and environmental law.

He is former Chairman of the firm's Litigation group and has served several terms on the firm's Management Committee.

John has over forty years of federal and state trial and appellate work in the public and private sectors, covering a range of areas including: environmental, antitrust, unfair trade and advertising, product liability, securities, shareholder derivative, government contracts, energy, personal injury, parallel civil and criminal, and general economic matters. He has represented domestic and international companies, trade associations, groups, and individuals on a compensated and pro bono basis in judicial proceedings throughout the country that have resulted in over forty reported and numerous unreported decisions by federal and state courts of appeals and trial courts. John also represents major companies and associations before the United States Environmental Protection Agency and the United States Department of the Interior and other state and federal agencies concerning natural resource issues.

John represents clients in alternative dispute resolution proceedings and has served as an arbitrator and a mediator. His environmental experience includes service as Common Counsel to PRP groups at the Berlin & Farro, Marion Bragg, Cardington Road, and Berry’s Creek Study Area Superfund sites, and as counsel to industrial PRPs at the Fox, Ottawa, Sheboygan, Saginaw, St. Lawrence/Massena and White river sites, and the Twelve Mile Creek/Lake Hartwell, Crab Orchard National Wildlife Refuge, and Waukegan Harbor sites. He negotiated several natural resources damages settlements with federal and state Trustees at a number of those sites, one of the earliest mixed funding agreements, and one of the earliest Supplemental Environmental Projects settlements under the Clean Water Act. He was counsel for industrial clients and trade associations in several administrative rulemakings and subsequent appellate litigation under the Clean Water Act and the Resource Conservation and Recovery Act.

Before joining Beveridge & Diamond, John served for six years as an attorney in the Civil Division of the United States Department of Justice in Washington, where he received an Assistant Attorney General's Special Commendation Award and the Attorney General's Meritorious Service Award. He began his practice in Madison, Wisconsin.

Before joining Beveridge & Diamond, John was an adjunct professor of the law of federal courts and insurance at the Columbus School of Law of the Catholic University of America, and an adjunct instructor on Business Law, Ethics, and Government in the MBA program at American University. He began his practice in Madison, Wisconsin, with Stroud, Stroud, Willink, Thompson, and Howard.

John received an honorable discharge from the United States Army Reserve. He owns one share of stock in the Green Bay Packers.