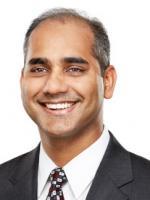 In his strategic counseling practice, Karthik focuses on emerging technologies, including AR/VR, artificial intelligence (AI) and machine learning (ML), blockchain, Internet-of-Things (IoT), and 5G technologies. He manages teams of attorneys and technical specialists to develop global patent portfolios for several multi-billion-dollar technology companies. In addition to overseeing the drafting and prosecution of hundreds of patent applications, he also advises on patentability, validity, infringement, and freedom-to-operate matters.

Karthik is a voting member of the Artificial Intelligence and Other Emerging Technologies Committee of the Intellectual Property Owners Association, a trade association for owners of patents, trademarks, copyrights, and trade secrets. Additionally, he serves as treasurer of the Giles S. Rich American Inn of Court, a non-profit organization dedicated to fostering professionalism, ethics, civility, and legal skills in intellectual property.

Before working in patent law, Karthik was a researcher at the University of Texas at Austin. His doctoral studies centered on plasma physics, quantum electronics, and optics, with a portfolio certification in nanoscience and nanotechnology. While at UT-Austin, he developed optical micro-endoscope technologies licensed to a startup company that was acquired for $25 million. He is a co-inventor of nine U.S. patents and has authored or coauthored numerous scientific articles in peer-reviewed publications.