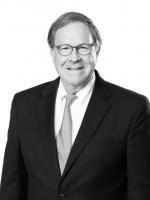 Mac Greaves is a member of the Labor & Employment Practice Group. During his more than three decades in private practice, Mac has represented employers in the full range of workforce-related matters.

Mac handles claims and litigation relating to workers’ compensation, retaliatory discharge under the Workers’ Compensation Act, and unemployment compensation claims in all state courts. He also represents clients in any and all tort claims in the employment context and employment relationships, such as wrongful discharge, breach of contract, fraud, tort of outrage, invasion of privacy, assault and battery, false imprisonment, defamation, drug and alcohol-related issues, covenants not-to-compete, restraint of trade, trade secrets, and the Alabama Age Discrimination Act. He also prepares handbooks and drug and alcohol testing policies for clients.

Mac routinely represents clients before the National Labor Relations Board, the Department of Labor (including wage and hour and OSHA disputes), the Office of Federal Contract Compliance (OFCCP), the Equal Employment Opportunity Commission (EEOC), and all state and federal courts. He has handled disputes involving Title VII of the Civil Rights Act of 1964 (sex, race, religion, national origin, etc.), the Age Discrimination in Employment Act, the Pregnancy Discrimination Act, the Equal Pay Act, the Civil Rights Act of 1991, the Fair Labor Standards Act, the Employee Polygraph Protection Act of 1988, the Immigration Reform and Control Act of 1986, the Fair Credit Reporting Act, the Family and Medical Leave Act, the Americans with Disabilities Act, the Employee Retirement Income Security Act, COBRA, professional liability litigation (agents, directors, and officers liability), data breach/cybersecurity, and any and all other federal statutes involving the employment relationship.

Mac served as a law clerk to the Honorable J. Foy Guin, Jr., US District Judge of the US District Court for the Northern District of Alabama, from 1976 to 1977 and served as an attorney with Region 21 of the National Labor Relations Board from 1977 to 1979.

Articles in the National Law Review database by Mac B. Greaves