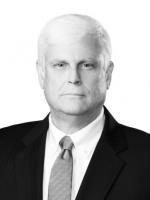 Mike Magner is a partner in the Litigation Practice Group. A former federal prosecutor, he represents clients in a wide range of commercial disputes, investigations, and white-collar criminal matters.

Mike is a preeminent and widely respected trial attorney and Fellow of the American College of Trial Lawyers. He has more than 35 years of experience litigating complex criminal and civil matters, including more than 45 jury trials. He provides preventive and litigation services for businesses and individuals in corporate and white-collar criminal matters. He also represents individuals and companies in connection with grand jury and other investigations.

Mike has particular experience in anti-corruption compliance and litigation matters on the domestic and international levels, with broad experience in civil and criminal RICO matters. He served as a federal prosecutor in New Orleans for 20 years. In that role, he was a key member of the team that successfully prosecuted former Louisiana Gov. Edwin Edwards, following a five-month trial. He was also the lead prosecutor in the Department of Justice's long-term investigation and prosecution of judicial and related public corruption known as "Operation Wrinkled Robe." In recognition of his work, Mike was awarded the Department of Justice's highest award for litigation, the John Marshall Award, as well as the Director's Award for Superior Performance by a Litigative Team.

He has also served as a supervisor of the US Attorney's Office's Anti-Terrorism/Crisis Response Unit, Organized Crime Strike Force, and Violent Crime Unit, and has tried cases in virtually all sections of the US District Court for the Eastern and Middle districts of Louisiana.

Mike is particularly adept in handling long-term, complex white-collar investigations and trials, including export control, mail and wire fraud, government contract fraud, bribery, money laundering, police misconduct, and civil rights violations. In 2011, he served as the Federal Bureau of Investigation's advisor to the Kenyan Anti-Corruption Commission in Nairobi, Kenya, where he was embedded in their principal headquarters for nearly two months, and provided training to KACC's investigators, auditors, and attorneys on corruption compliance, investigative, and prosecution matters. He has also trained foreign judges and prosecutors in Central Asia and Africa and has regularly trained federal prosecutors through the Attorney General's Advocacy Institute.

Following Hurricane Katrina, Mike prosecuted the first criminal case upon the re-opening of federal court and also successfully tried several high-profile civil rights cases against New Orleans policemen. He was the US Department of Justice's first counsel for emergency management and crisis response in the Office of Director, Executive Office for US Attorneys in Washington, DC, for 18 months, where he represented the DOJ at various White House-level emergency exercises and planning meetings relating to the federal government’s response to major criminal events, natural disasters, and pandemics. While with the DOJ, Mike was also selected as a trained evaluator of other US Attorneys' Offices throughout the country on various substantive legal areas, as well as ethics and professionalism.

Mike is also an associate professor at the Tulane Law School, where he teaches a course in trial advocacy.