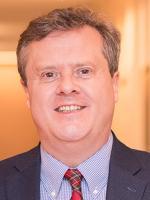 Dr. Robert MacLean leads our International Trade team in Europe. He is a globally recognised expert in his field. After starting his career at DG-Trade of the European Commission, he now represents a large number of EU industries, corporations and exporters in trade disputes, World Trade Organization (WTO) law and anti-dumping or anti-subsidy investigations. He has also been lead counsel in approximately two dozen appeals to the European General Court and the Court of Justice, including a number of landmark cases helping to shape EU trade law and policy.

Robert specialises in contentious litigation, investigations and procedures before the European Commission and the European Courts on trade-related disputes and remedies. He also advises on EU export control, sanctions and trade compliance as well as law of the WTO. He has been practicing in Brussels and London in this field, mainly at partner-level, for more than 25 years. Leveraging his many years of experience at EU level, he is now also advising clients on the new UK customs regime and its independent trade remedy framework as Brexit approaches.

Robert is praised for his creativity and problem-solving abilities, particularly relating to successful advocacy and the pursuit of cost savings and financial recoveries for his clients. Chambers Global 2017 recently identified Robert as “a great trade lawyer, very active on all sorts of successful projects”. The previous edition commented that “Peers single out Robert MacLean as a good example of a pure trade lawyer – he is 100% involved. Clients concur that he is “an exceptional specialist”.”

He has been principal legal adviser in more than 70 EU trade remedy procedures for a variety of different EU industries and trade associations, importers and exporters in many countries, including the US, China, Taiwan, India and Cambodia. His trade client list spans a wide spectrum of EU and global industries, ranging from traditional manufacturing to advanced IT products. He also has substantial experience in the full range of EU trade remedy procedures, such as complaints and exporter defence work, but also in rarer and more novel kinds of procedures, such as refunds, anti-circumvention, anti-absorption and interim and expiry reviews. He was also project leader for two significant evaluations of EU trade policy for DG-Trade of the European Commission.

Many of these representations have been high profile and, in some instances, have involved litigation in the European Courts. Robert has now conducted more than two dozen appeals to the European Courts as lead counsel for his clients, with a high degree of success in terms of favourable judgments or negotiated settlements with the EU institutions.

His work in the area of EU customs law mainly relates to duty reduction and recovery. He has successfully filed more than 50 requests for autonomous duty suspensions in France, Germany, Belgium and the UK. He is also the architect of the firm’s EU Duty Reduction and Recovery programme that has helped clients achieve significant amounts in EU customs duty savings for their European manufacturing operations.

Articles in the National Law Review database by Robert MacLean