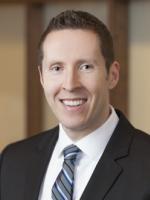 Prior to joining Squire Patton Boggs, Steve served as a law clerk to The Honorable Alan E. Norris at the US Court of Appeals for the Sixth Circuit. Steve also interned with The Honorable John M. Manos at the US District Court for the Northern District of Ohio.

Steve has an active appellate practice and has represented numerous clients before courts across the country, including the Supreme Court of Ohio, the US Court of Appeals for the Second and Sixth Circuits, and the US Supreme Court. In addition to guest lecturing on effective appellate advocacy, Steve has regularly contributed to the Sixth Circuit Appellate Blog, a firm-sponsored blog that fosters discussion on news about and opinions issued by the US Court of Appeals for the Sixth Circuit, with an emphasis on cases pertaining to business interests.

Steve has appeared on radio and TV programs to discuss recent high profile appellate cases and issues, including appearances on LXBN TV of the LexBlog Network (the largest professional blog network in the world). More recently, Steve published an article in the inaugural issue of the Ohio State Law Journal that explores the various ethical and professional pitfalls confronting the unwary appellate practitioner.

In addition to his active appellate practice, Steve has spent a substantial portion of his career focused on the field of professional ethics, counseling major law firms across the country, as well as Squire Patton Boggs lawyers in offices worldwide. He is a frequent lecturer on legal ethics issues and a regular participant in the firm’s annual program on ethics and professionalism, presented every December. As part of his ethics practice, Steve has a unique focus on social media. He has lectured on the legal aspects of, and professional pitfalls associated with social networking.

Steve has co-authored a scholarly ethics article addressing difficult choice of law issues for companies doing business abroad. The article, co-authored with Squire Patton Boggs partner Kenneth Moore (who is chair of the firm’s Ethics Committee) and ICF International’s Mollie Roy, focuses on the complex tension and interrelationship between US and foreign ethics law. The article was published in the prestigious ACC Docket, which is the national publication of the Association of Corporate Counsel.

Steve has become very well-known for his talents as a videographer. Steve has written, directed, and produced a series of innovative videos for Squire Patton Boggs that explore professional conduct issues confronting both inside and outside counsel.

Articles in the National Law Review database by Steven A Delchin

It Is Tough to Avoid the Duty to Defend
By
Squire Patton Boggs (US) LLP
Agencies Propose Volcker Rule Amendments Relating to Covered Funds
By
Vedder Price
March 31 Deadline to Amend 403(b) Retirement Plans Approaches
By
Ward and Smith, P.A.
Big Win For Twilio: Huge Text Platform Earns All-Important TCPA Summary Judgment Ruling
By
Squire Patton Boggs (US) LLP
Impact Of The Coronavirus On Organizations’ Meetings And Events
By
Barnes & Thornburg LLP
California’s Latest Gift to the Public Employee Unions is Challenged in Federal Court
By
Proskauer Rose LLP
A General Counsel’s View of Arbitration Clauses in Employee Contracts
By
Womble Bond Dickinson (US) LLP
Ohio Revises Definition of Ambulatory Surgical Facilities, Potentially Expanding Application of Licensure Requirements
By
Squire Patton Boggs (US) LLP
Surprise Billing Background and Comparison – Updated February 25, 2020
By
McDermott Will & Emery
Coronavirus Continues to Spread: What Employers Should Be Doing
By
Mintz
Religious Use Law in South Florida [Podcast]
By
Bilzin Sumberg
FDA Permanently Exempts Type III DMFs for Drug Packaging Materials from eCTD Format Requirement
By
Keller and Heckman LLP
Sixth Circuit Adds its Voice to the post-Janus Chorus: Good-Faith Defense Applies to Union “Fair-Share” Fees
By
Squire Patton Boggs (US) LLP
Chinese Trademark Office Cracks Down on Malicious Filing of Coronavirus-Related Trademarks
By
Schwegman, Lundberg & Woessner, P.A.
Coronavirus Losses: Will Your Commercial Insurance Policies Respond?
By
K&L Gates
“Hair Love” Coming to a Jurisdiction Near You
By
Faegre Drinker
P3s to Combat Climate Change
By
Bilzin Sumberg
Long-Awaited NLRB Joint Employer Rule Sets Employer-Friendly Standard for Joint Employer Determinations
By
Ogletree, Deakins, Nash, Smoak & Stewart, P.C.
Under Siege - Zen Master Steven Seagal Loses to the SEC
By
Polsinelli PC
In An Estate Dispute, A Court Held That A Trial Court Should Not Disqualify An Attorney Who Communicated Directly With A Beneficiary Where The Attorney Did Not Know That The Beneficiary Was Represented By Counsel
By
Winstead