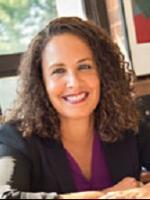 Suzette Malveaux is Provost Professor of Law and Director of the Byron R. White Center for the Study of American Constitutional Law at the University of Colorado Law School. She was recently elected to the American Law Institute. Previously, she was Professor of Law and former Associate Dean for Academic Affairs at the Catholic University of America Columbus School of Law. Professor Malveaux also served as Director of the Law & Public Policy Program in the fall of 2008. She teaches Civil Procedure, Complex Litigation, Civil Rights Law and Fair Employment Law. She has published numerous law review articles that explore the intersection of civil procedure and civil rights and co-authored Class Actions and Other Multi-Party Litigation; Cases and Materials (West, 2006, 2012). She has presented at dozens of conferences in this area.

Professor Malveaux graduated magna cum laude from Harvard University. She earned her J.D. from NYU School of Law, where she was an Associate Editor of the Law Review, a Root-Tilden Scholar and a Center for International Law Fellow. At NYU, she was awarded the NAACP LDF Earl Warren Scholarship, the American Association of University Women Fellowship, the Vanderbilt Medal for "extraordinary contributions" to the law school, and the Judge Rose L. & Herbert Rubin Law Review Prize, for making the "greatest contribution in public, international or commercial law." Upon graduation, she clerked for the federal district court (SDNY) for the Honorable Robert L. Carter.

Professor Malveaux has been consulted by the media to provide commentary on various legal issues involving the Supreme Court, the civil legal system and civil rights. Her appearances include CNN, MSNBC, Fox News 5, Al Jazeera English and the PBS NewsHour. She has been interviewed by various media outlets, including The New York Times, The Wall Street Journal, The Atlantic, The National Law Journal, and the Congressional Quarterly, and her work has been recommended by various blogs.

As a class action specialist, she has tackled complex legal matters in high profile civil rights cases, at the federal trial and appellate court levels. For example, she represented over 1.5 million women in Wal-Mart v. Dukes, the largest employment discrimination class action in U.S. history to date. She practiced law in Washington, DC at Cohen, Milstein, Hausfeld & Toll, P.L.L.C. and the Washington Lawyers? Committee for Civil Rights & Urban Affairs.

Articles in the National Law Review database by Suzette Malveaux