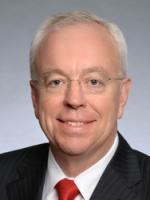 William J. Robinson is a partner and intellectual property litigation lawyer with Foley & Lardner LLP, where his practice focus is patent litigation. He has litigated over 150 patent cases, including 85 in electronics and computer technologies. He has litigated over a dozen cases in Texas, including the Eastern District. Mr. Robinson has over 125 reported decisions. His patent jury verdicts include a $100 million award. He also has extensive experience in copyright, trademark, trade secret litigation, and FTC deceptive claims as well as intellectual property counseling and licensing. Mr. Robinson is chair of the firm’s IP Litigation practice and is also a member of the Privacy, Security & Information Management Practice.

In recognition of his experience, Mr. Robinson has been Peer Review Rated as AV® Preeminent™, the highest performance rating in Martindale-Hubbell's peer review rating system. He has been a guest lecturer in patent/computer law at Southwestern University School of Law and is listed in "The State's Top Patent Lawyers," California Lawyer, March 1992. Mr. Robinson was recommended by The Legal 500 US as a leading attorney in intellectual property matters (2007) and in the area of media, technology and telecoms: marketing and advertising (2015). He also has been selected for inclusion in the 2009-2017 Southern California Super Lawyers® lists.

He is admitted to practice in California; and before the U.S. District Courts for the Central, Northern and Southern Districts of California; U.S. Court of Appeals for the Ninth and Federal Circuits; the U.S. Supreme Court and the U.S. Patent and Trademark Office.