COVID-19: Coronavirus Coverage Litigation for Policyholders, All is Not "Loss," Nor Lost

Since March of 2020, more than a thousand lawsuits have been brought in state and federal courts around the country seeking to resolve questions around the availability of insurance coverage for COVID-19-related business losses. The overwhelming majority of these lawsuits have been filed by policyholders, and many of these suits have been the subject of early motions to dismiss brought by the insurance company defendants. The most common basis for seeking dismissal is the insurers’ argument that the policyholder-plaintiffs have failed to sufficiently plead the “direct physical loss” required to state a claim for coverage under their commercial property policies. Decisions on these motions began to issue in July and, by mid-August, they were being issued at the rate of two-to-three per week. By late September, courts had issued decisions on motions to dismiss in seventeen of these coverage cases and, while the early win/loss record may appear to favor insurers, the battle has only just begun.

COVID-19-related insurance coverage litigation is now pending in federal and state courts in the majority of states across the United States.1 Pennsylvania, New York, New Jersey, Florida, Illinois, Texas, California, and Washington have the largest number of suits pending, accounting for approximately 75 percent of all suits filed. The policyholders-plaintiffs represent a variety of industries, with companies in the food and beverage industry (i.e., restaurants, bars) making up the largest contingent by far.2 Although many different insurers are embroiled in one or more cases, the insurers most often appearing thus far include members of The Hartford Financial Services Group, Cincinnati Financial Corporation, Zurich Insurance Group, the Travelers Companies, Certain Underwriters at Lloyd’s London, and Erie Insurance Exchange.

The complaints filed by policyholders in these cases have begun to look quite similar, with the overwhelming majority of plaintiffs seeking coverage under business income, extra expense, and civil authority provisions. The majority of these suits have been brought in federal court on the basis of diversity jurisdiction, and, for the same reason, a number of suits commenced in state court have been successfully removed to federal court.

Approximately 25 percent of the COVID-19-related coverage suits commenced by policyholders have been the target of early motions to dismiss brought by the insurer-defendants, and the strategy among the insurers is clear. As a first line of defense, they are targeting those complaints that appear to present the most challenging fact patterns for satisfying the “direct physical loss or damage” requirement to state a claim for insurance coverage. Additionally, many of these motions seek early dismissal of these cases based on some form of “virus” exclusion found in the policies. As of late September, courts in eight states had issued decisions on motions to dismiss in 17 cases.3 The win/loss record thus far favors insurers—with 11 “wins” afforded the insurers and six “wins” afforded to policyholders; but the decisions are nuanced and often turn on specific policy language and prior decisional law in a particular jurisdiction. 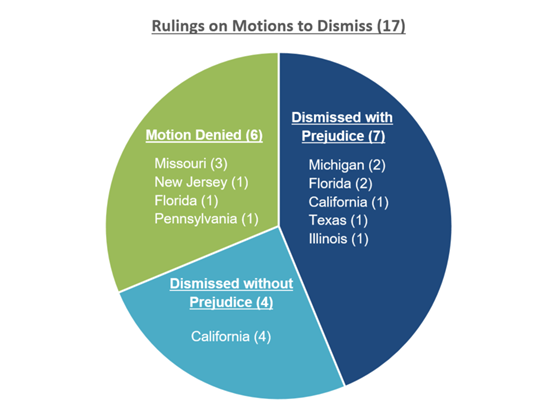 Courts have issued 17 merits decisions on motions to dismiss issued in the following cases (presented in date order):

As noted in the charts above, courts in five states, Michigan, Florida, California, Texas and Illinois, have granted motions to dismiss with prejudice in seven cases. One of these courts, the California Superior Court for Monterey County, in The Inns by the Sea, issued an order following oral argument which sustained the insurer’s demurrer to the entire complaint “without leave to amend on the grounds that the allegations fail to state facts sufficient to constitute a cause of action.” The court provided no further explanation for its decision and, accordingly, the ruling is of limited value. During oral argument the court focused the parties on the question of whether the presence of COVID-19 on the insured premises satisfied the “direct physical loss of or damage to property” requirement of the policy, and it is reasonable to deduce that the court, without expressly saying so, concluded it did not.4

In five of the remaining six cases dismissed with prejudice (Gavrilides, Turek, Malaube5, Diesel Barbershop, and Sandy Point), the courts were heavily influenced by the fact that the policyholder-plaintiffs did not plead that the novel coronavirus or a person with the resulting COVID-19 disease had ever been present on their premises. The precise policy language examined by the courts differed slightly in each of these cases.

But in each of these cases, the courts found that the policy language required some tangible, physical damage or alteration to the covered property — which damage had not been pled by the policyholder. These courts further rejected the argument that loss of use satisfied the “direct physical loss” requirement. Among these cases, Turek is further notable because, as opposed to there being an absence of any allegations that COVID-19 was present on the insured premises, the plaintiff in Turek affirmatively alleged that COVID-19 was not present.

The sixth of these cases (Martinez) is unique among the cases dismissed with prejudice because the dismissal was based not on a failure to satisfy the “direct physical loss” requirement of the policy but, instead, on the presence of a virus exclusion.6 In Martinez, the policyholder pled the presence of the virus on the premises and claimed to have incurred costs to decontaminate his dental office. The policy provided coverage for “direct physical loss or damage to Covered Property at the [plaintiff’s] premises” that is “caused by or result[s] from any Covered Cause of Loss.” By virtue of the “plain language” of the virus exclusion, the court concluded that “the loss or damage asserted was not due to a ‘Covered Cause of Loss.’”

Finally, with respect to these seven suits dismissed with prejudice, the policyholders have, or had, an opportunity to appeal these decisions. In three of these cases, Gavrilides, The Inns by the Sea, and Diesel Barbershop, the appeal deadline has passed without a notice of appeal having been filed. It remains to be seen whether the policyholders in the other four cases will pursue an appeal as the deadlines to do so have not yet passed.

As noted above, there have been four decisions by California federal courts to dismiss COVID-19 insurance coverage suits brought by policyholders (10E, Pappy’s Barber Shops, Mudpie and Franklin EWC), but these courts have consistently dismissed the suits without prejudice to the filing of amended complaints. In all four of these cases, the policyholders did not allege the presence of COVID-19 on their insured premises. In three of these cases (10E, Pappy’s Barber Shops, and Mudpie) the courts’ decisions based their dismissals on the “direct physical loss” requirement of the policies, but permitted the plaintiffs an opportunity to plead their coverage claim in a way that satisfied the policy language.

The court in Mudpie was the most explicit, commenting: “Had Mudpie alleged the presence of COVID-19 in its store, the Court’s conclusion about an intervening physical force would be different.” In two of these cases, 10E and Pappy’s Barber Shops, the plaintiffs have already filed amended complaints.

In the fourth of these decisions, with Franklin EWC, like Martinez (discussed above), the court based its decision on the application of a virus exclusion. Notably, the insurer, Sentinel Insurance Company, moved to dismiss solely on the basis of the virus exclusion, i.e., it did not raise the “direct physical loss” issue. In dismissing the complaint “with leave to amend,” the court did so expressly because of “the rapidly evolving legal landscape involving COVID-19 business interruption coverage.”

Courts in four  states, Missouri, New Jersey, Pennsylvania and Florida, have denied insurer motions to dismiss brought in six  COVID-19 insurance coverage cases: Studio 417, K.C. Hopps, Optical Services USA, Blue Springs Dental, and Urogynecology Specialist. In five  of these six cases, one of the dominant reasons for each court’s decision was its conclusion that, based on dictionary definitions or state law precedent, the policyholder had sufficiently and plausibly pled “direct physical loss.”

In the sixth of these cases, Urogynecology Specialist, the insurer, Sentinel Insurance Company, moved to dismiss on the basis of a virus exclusion.7 The exclusionary language, however, was found within a policy provision of the policy titled “Limited Fungi, Bacteria or Virus Coverage,” that was stated in exclusionary terms but included an exception to the exclusion. The court’s decision commented that certain cross-referenced portions of the policy were missing from the record before it and concluded that “several arguably ambiguous aspects of the Policy make determination of coverage inappropriate at this stage.” The court further recognized as significant “the unique circumstances of the effect COVID-19 has had on our society” and the absence of any binding case law on “the issue of the effects of COVID-19 on insurance contracts virus exclusions.” Thus, the court found “that Plaintiff has stated a plausible claim at this juncture.”

While policyholders have suffered some initial courtroom losses in their pursuit of insurance coverage for COVID-19 loss and damage, there have also been some encouraging “wins.” This battle is just heating up. The case law, while still in an early developmental stage, is providing useful guidance to policyholders — highlighting the potential strengths and weaknesses of the unique policy wordings in their policies and offering insight regarding the optimal ways in which to plead the facts of their losses so as to stave off early motions to dismiss for failure to state a claim.

1 A useful research tool for information about COVID-19 insurance coverage litigation is the “Covid Coverage Litigation Tracker” maintained by the University of Pennsylvania Carey Law School.

3 Additionally, there have been decisions in two other cases favorable to insurers where (i) a federal district court in New York denied a plaintiff’s motion for preliminary injunction, Social Life Magazine Inc. v. Sentinel Ins. Co., Case No. 1:20-cv-03311-VEC (May 14, 2020) (case subsequently voluntarily dismissed by plaintiff); and (ii) the Superior Court of the District of Columbia granted an insurer’s motion for summary judgment. Rose’s 1, LLC v. Erie Insurance Exchange, Civil Case No. 2020 CA 002424 B (Aug. 6, 2020) (notice of appeal filed on September 4, 2020).

4 There have been five rulings issued by courts in California, and the ruling in The Inns by the Sea is distinguishable from the other four in at least two interesting respects. First, The Inns by the Sea was decided by a California state court while the other four rulings (in 10E, Pappy’s Barber Shops, Mudpie, and Franklin EWC) were issued by California federal courts. Second, the dismissal in The Inns by the Sea was a dismissal with prejudice while the dismissals in the four California federal court cases were all dismissals without prejudice, and in two of those cases (10E and Pappy’s Barber Shops), the plaintiffs have since filed amended complaints.

5 The decision in Malaube is reflected in a Magistrate’s Report and Recommendation that has not yet been adopted by the court.

6 Notably, the property policies at issue in Gavrilides, Turek, Malaube, and Diesel Barbershop also contained virus exclusions, but the courts in those cases declined to address their application in light of their dismissals based on the policyholders’ failures to satisfy the threshold “direct physical loss” requirement.

Ms. Branthoover practices in the area of complex commercial litigation and international arbitration. In addition to representing Fortune 100 companies and investors in litigation, including trials, arising out of complex commercial transactions, she has considerable experience with respect to insurance coverage disputes arising under a wide variety of liability and property policies related to environmental, toxic tort, employment, business interruption, and product liabilities. She has represented major industrial and commercial clients in numerous state and federal...