In the latest chapter of a year-long battle between an individual inventor and two companies, Lisa Duer (“Duer”), a resident of Woodstock, Georgia, filed her Third Amended Complaint alleging patent infringement, trademark infringement, copyright infringement, and trade dress infringement action on July 24, 2015 against Bensussen Deutsch & Associates, Inc. (“BDA”), a Washington corporation, and Eli Lilly and Company (“Lilly”), an Indiana corporation.  The amendment was filed pursuant to an Order entered by Judge Eleanor L. Ross on July 8, 2015.

The amended complaint paints a picture of systematic corporate abuse of a small business owner by BDA and Lilly in which they recognized the value of Duer’s established product, negotiated to license the product, and then, when Duer found some terms unacceptable, discontinued negotiations and began using the product anyway.  According to the complaint, the repeated demands that improper and infringing activity cease were uniformly ignored.

Duer’s Take-n-Slide™ product is a “dosage adherence tool” to remind prescription users on a daily basis as to their last prior dosage intake.  The product, simple and effective in its functionality, is pictured below: 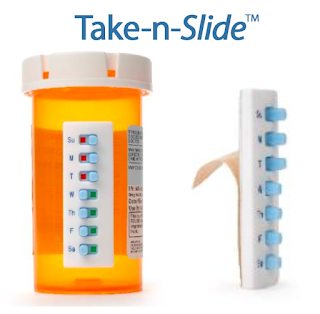 Duer obtained U.S. Patent No. 7,614,358, issued on November 10, 2009, relating to the dosage adherence tool and also copyrighted the instructions included with the product (Reg. Nos. VA0001911109, VA0001431705).  The complaint further alleges that the product “consists of an inherently distinctive combination of design, shape and color scheme.”  Before a dose is taken for a day the color green appears to the right of the slider.  After taking a dose the user moves the slider for that day and the color red appears on the left.

Discussions between Duer, on the one hand, and Lilly and BDA on the other occurred in 2010 and 2011 through Duer’s distributor, Richard Cosgrove of Anatomed, Inc.  Lilly wanted Duer to license the product to BDA, as BDA was already a Lilly approved supplier.  According to the complaint, when Duer informed BDA that a proposed two-year non-solicitation provision was objectionable, BDA abruptly ended discussions and later stated Lilly had decided not to move forward with the product.  Two years later in 2013, Duer learned that Lilly was using the product.  The complaint alleges that even the insert sheet was substantially copied and inserted with the product.  Finally, BDA and Lilly are accused of using the Take-n-Slide™ trademark or confusingly similar marks.

The suit seeks an injunction, damages, enhanced damages, attorney’s fees, costs, and other “relief as the Court may deem just and equitable.”

The case, originally filed in May 2014, is Lisa Duer v. Bensussen Deutsch & Associates, Inc., and Eli Lilly and Company, No. 1:14-cv-01589-ELR, and the Third Amended Complaint was filed in the U.S. District Court for the Northern District of Georgia, Atlanta Division, on July 24, 2015.  The case is assigned to U.S. District Judge Eleanor L. Ross.