Institutional Shareholder Services (ISS) has issued new FAQs addressing U.S. Executive Compensation Policies and U.S Equity Compensation Plans for the 2019 proxy season, for annual meetings held on or after February 1, 2019.  Significant executive compensation and equity plan updates for U.S. listed companies are summarized below.  Companies should be mindful of the impact, if any, that ISS’s updates may have on their existing and proposed executive compensation and equity and incentive-related plans, policies, agreements and arrangements, in addition to Glass Lewis & Co.’s updated proxy guidance, which we have summarized in a previous client alert.1

On December 20, 2018, ISS released its U.S. executive compensation policies FAQs for annual meetings held on or after February 1, 2019.2  Key updates include:

Refinement of ISS Review of Board Actions in Response to a Low Say-on-Pay Vote.  Generally, when a say-on-pay proposal receives less than 70% support of votes cast (for and against), ISS will conduct a qualitative review of the compensation committee’s responsiveness to the low support at the next annual meeting.  ISS has refined its policy to add that in cases of low support in connection with an unusual situation, such as a proxy contest or bankruptcy, ISS will review how the board considered investor dissent and whether the board took actions to meaningfully respond.

Quantitative Pay-for-Performance Screens Remain Unchanged.  While the quantitative screens remain unchanged for the 2019 proxy season, ISS will continue to explore Economic Value Added (EVA) metrics to round out the market performance (TSR) and accounting performance (GAAP) measures utilized in ISS’s financial performance analysis.  EVA data will be displayed in ISS research reports on a phased-in basis, but will not impact ISS’s quantitative pay-for-performance analysis at this time.

Neutral View of TSR as an Incentive Program Metric.  ISS does not endorse or prefer TSR or any specific metric in executive incentive programs, although ISS recognizes that investors prefer programs that emphasize objective and transparent metrics.  ISS believes that boards and compensation committees are generally in the best position to determine the incentive plan metrics that encourage executive decision-making that promotes long-term shareholder value creation.

Refinement of Qualitative Pay-for-Performance Analysis.  In addition to the key factors that ISS will consider in performing its qualitative pay-for-performance analysis, ISS will look for an emphasis on objective and transparent performance metrics, and it will also look at the actual results of financial and operational metrics, including any non-standard adjustments to such results.

Scrutiny of Front-Loaded Awards.  It is unlikely that ISS will support front-loaded equity awards that are intended to cover more than four years, due to ISS’s concern that such awards limit a board’s ability to meaningfully adjust future pay opportunities in response to changes in performance or strategic focus, or unforeseen events.  ISS expects any front-loaded awards to include a firm commitment not to grant additional awards over the covered period.  ISS will more closely scrutinize the pay-for-performance considerations for front-loaded awards, including, without limitation, completeness of disclosure, emphasis on transparent and rigorous performance criteria, and stringent vesting conditions that limit windfall risk.

“Good Reason” Resignations that Fail to Qualify as Constructive Terminations as a Problematic Pay Practice.  ISS will view a “Good Reason” definition that may trigger CIC severance payments in situations where no adverse constructive termination exists as a problematic pay practice.  As a result, “Good Reason” definitions should be carefully drafted to avoid any potential windfall risk to an executive, such as a definition triggered by a performance failure, company bankruptcy or delisting.  In addition, ISS will no longer view a

“Good Reason” definition triggered by a successor’s failure to assume a specific agreement as a problematic pay practice. New Problematic Pay Practices.  ISS will consider shifts away from performance-based compensation to discretionary or fixed pay elements, such as changes made in response to the elimination of the Internal Revenue Code Section 162(m) performance-based compensation deduction that remove all performance-based criteria, as a problematic pay practice.  In addition, insufficient executive compensation disclosure by externally managed issuers that prevents a reasonable assessment of the pay programs applicable to the executives of such issuers will likely result in a negative say-on-pay recommendation.

Scaled Compensation Disclosure for Newly Qualified Smaller Reporting Companies.  ISS may be unlikely to support a say-on-pay vote if a newly qualified smaller reporting company (SRC) avails itself of the scaled disclosure requirements and the scaled disclosure does not allow shareholders to meaningfully assess the board’s compensation philosophy and practices or enable investors to make an informed say-on-pay vote.  As a result, SRCs may feel increased pressure to provide disclosure that exceeds what is required under the SEC’s scaled disclosure requirements in order to address concerns from ISS and Glass Lewis.

Excessive Non-Employee Director Compensation.  ISS has delayed the implementation of its policy, initially scheduled to go into effect for the 2019 proxy season, to issue adverse voting recommendations for companies with excessive non-employee director (NED) pay without a compelling rationale.  Instead, beginning in 2020, ISS will recommend withhold votes for board members responsible for setting and approving director compensation when there is a pattern of excessive NED pay for two or more consecutive years, absent a compelling rationale.  Acceptable rationales, if reasonable and adequately explained, include (i) onboarding grants for new directors that are clearly identified as one-time in nature; (ii) special payments related to corporate transactions or special circumstances, e.g., special committee service; and (iii) payments made for specialized scientific expertise.  ISS will assess payments in connection with separate consulting agreements on a case-by-case basis, and will not view payments to reward general performance or service as a compelling rationale.

ISS’s revised methodology to identify NED outliers will focus on individual NED pay above the top 2-3% of all comparable directors within the same index and two-digit GICS group, recognizing that nonexecutive chairs and lead independent chairs, as board-level leaders, are often recognized with additional pay compared to other NEDs.  ISS’s revised methodology also acknowledges that in certain sector and index groupings, NED pay is narrowly distributed, and for such groups where there is a very small difference in pay magnitude between the top 2-3% of directors and the median director, the narrow distribution of NED pay may be a mitigating factor.

CEO Pay Ratio.  ISS will continue to display a company’s disclosed median employee pay figure and the CEO pay ratio, compared to the prior year (as available), in ISS research reports.  However, these data points will not impact ISS vote recommendations at this time.

On December 19, 2018, ISS released its U.S. equity compensation plans FAQs for annual meetings held on or after February 1, 2019.3  Key updates include:

Liberal Change in Control Definition Combined with Single-Trigger Vesting.  ISS will now view a liberal change in control (CIC) definition that could result in the vesting of awards by any trigger other than a full double trigger (i.e., a termination of employment in connection with a CIC) as a negative overriding factor, which may result in ISS’s recommendation against an equity plan proposal, regardless of the plan’s Equity Plan Scorecard (EPSC) score.  Therefore, companies should take steps to update any liberal CIC definitions and single-trigger CIC vesting provisions contained in existing equity plans (if a share pool needs replenishment) or proposed new plans in light of ISS’s updated guidance.

New EPSC “Negative Override” Factor.  ISS announced a new negative override factor for excessive shareholder dilution under the S&P 500 and Russell 3000 EPSC models only.  The new override will be triggered when a company’s equity plan is estimated to dilute shareholders by more than 20% (for the S&P 500 only) or 25% (for the Russell 3000 only). The override factor measures share capital dilution rather than voting power dilution, and is calculated as (A + B + C) ÷ CSO, where A = # new shares requested, B = # shares that remain available for issuance, C = # shares underlying unexercised/unvested outstanding awards, and CSO = common shares outstanding.

No Changes to EPSC Passing Scores.  Passing scores for all U.S. EPSC models have not changed from the 2018 proxy season (which remain 55 points for S&P 500 companies, and 53 points for all others), although companies should expect that, consistent with past practice, ISS will reallocate the points and weightings among some of the individual factors within each EPSC model.  ISS has indicated that weighting on the plan duration factor has increased to encourage plan approval resubmission to shareholders more often than listing exchanges require, to counter the elimination of shareholder approval for Code Section 162(m) purposes.

The chart below summarizes the maximum scores by EPSC models and pillars effective for shareholder meetings held on or after February 1, 2019. 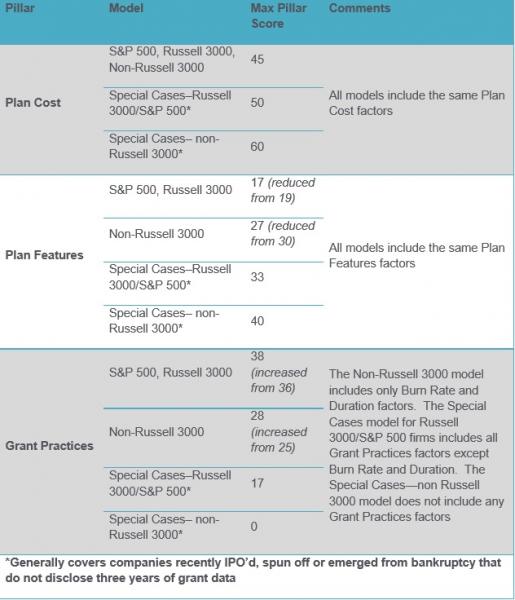 2 U.S. Compensation Policies FAQs for 2019 (December 20, 2018) may be found at https://www.issgovernance.com/file/policy/latest/americas/US-Compensatio...

3 U.S. Equity Compensation Plans FAQs for 2019 (December 19, 2018) may be found at https://www.issgovernance.com/file/policy/latest/americas/US-Equity-Comp...

Key Takeaways | Finding and Structuring Development Capital for Renewable Platforms...
By
McDermott Will & Emery
What’s Next for European Sports Governance and How Will It Address Its Current...
By
Squire Patton Boggs (US) LLP
Why Lawyers Should Never Pay for Awards or Honors and Never List Those on Their Web...
By
Stefanie Marrone Consulting
The Thrill of Fishing Coordinates and the Agony of Marginal Costs [PODCAST]
By
Greenberg Traurig, LLP
Advertisement
Advertisement
Advertisement

Clients rely on Vivian to help design and implement compensation systems to drive success by attracting, motivating and retaining top talent. Vivian is a dynamic member of the Firm’s Corporate and Securities Practice Group and a member of the Public Company Advisors Team.

Vivian has worked on deals in the US, UK and beyond for public and private companies and venture capital/private equity firms in numerous sectors, including technology, hospitality, health care, manufacturing, consumer goods, and banking and finance. Her experience extends to...