Chapel Hill, North Carolina is a beautiful town like any other beautiful town.  It has restaurants and parks and movie theaters and many renting and owning residents.  But Chapel Hill is also a college town, part of the large University of North Carolina system, which means a number of the town's "residents" are college students renting rooms, apartments and houses for the academic year.  It also means a house of five students will, more than likely, feature five cars, one for each student.  The converse is also a fair statement: that "the number of vehicles parked on a residential lot in the [zoning district] is a reasonable approximation of how many people are living at the property".

But You Can't Park Here.

It is in part this latter statement upon which Chapel Hill based its adoption of a zoning ordinance amendment to "limit[] the number of cars that may be parked on a residential lot in the [zoning district] to four cars", applicable both to owner-occupied and rental properties.  In other words, the "parking limitation" is actually a zoning ordinance, with the number of cars serving as a proxy for determining the number of occupants to a residential structure.  According to the North Carolina Court of Appeals, "[O]ver-occupancy leads to other problems, [and] decreasing the over-occupancy of rental properties is a valid goal of a zoning ordinance".  This, in itself, is not so controversial.

And If You Do Park Here, I'll Ticket This Other Guy.

Rather, the controversy erupted over enforcement of the zoning ordinance against rental properties.  It seems the ordinance is enforced "by citing the owner of the property for violations [of parked cars numbering greater than 4]".  In other words, is Chapel Hill able to cite the record owner of a residence, rather than the cars, for violations of the parking rules?  According to the plaintiffs -- owners of rental properties subject to the parking rules -- the answer is "no".  According to the trial court and the North Carolina Court of Appeals, the answer is "yes": Chapel Hill is authorized to adopt a zoning law limiting the number of cars parked at a residence and to enforce violations of that zoning law against the owner of the residence, even a rental residence.

Local government powers in North Carolina have been under the microscope, as of late.  A series of judicial decisions -- culminating in the relatively recent Lanvale Properties, LLC v. County of Cabarrus, 366 N.C. 142 (2012) from the North Carolina Supreme Court -- have put some question to the limits of and the manner of determining the limits of municipal powers.  It is in the wake of these decisions that Chapel Hill's actions will be reviewed in Patmore v. Town of Chapel Hill, COA 13-1049 (April 1, 2014).

First, the enforcement of the zoning law violates State substantive due process protections because "the ordinance is enforced exclusively based on the existence of more than four parked cars on a lot without any determination as to the reason for the parking of those cars."  In other words, the enforcement of the zoning law against "non-culpable landowner-lessors" is "arbitrary and capricious".

The Court did not buy plaintiffs' first argument.  The Court instead put stock in Chapel Hill's affidavit evidence regarding the efficacy of landlord ticketing and in a federal district court decision from Michigan: "[T]he practice of more avidly enforcing the Code against owners of property in the City than against their relatively transient tenants appears to be reasonably calculated to efficiently and effectively secure compliance with the Housing Code."  Cunningham v. City of East Lansing, 2001 U.S. Dist. LEXIS 15967 (W.D. Mich. Sept. 28, 2001).

Second, the zoning law “is invalid as being unauthorized under N.C. Gen. Stat. §160A-301”, which addresses a municipality's power to "regulate" the "parking of vehicles" in "privately owned public vehicular area[s]" but does not address municipal power to regulate "parking on private property".

The Court did not buy plaintiffs' second argument, which was based in the "expressio unius est exclusio alterius" canon of statutory construction.  The Court makes it clear that the zoning law is that -- a zoning law -- and not a parking regulation adopted pursuant to NCGS 160A-301:  "[T]here is no basis for assuming that our General Assembly intended legislation allowing a city to regulate parking in public vehicular areas to diminish a town’s authority to adopt land use zoning regulations that deal with population density or over-occupancy of rental homes."  Regulating parking as a proxy for a zoning action does not render the zoning law a parking law.

Third, plaintiffs contend that "the decision ... in Lanvale Properties, LLC v. County of Cabarrus, 366 N.C. 142 (2012), 'establishes that the instant parking regulation is not authorized by the general zoning power.'"

The Court stated that the key to the holding in Lanvale, which invalidated a county ordinance, is that the ordinance was determined not to be a zoning law.  Here, however, the parking regulation is a zoning law, which renders Lanvale inapposite in the Court's mind to an analysis of "a local government's authority to enact a bona fide zoning ordinance or the requirements of a valid zoning regulation".

Let us pause here for a moment and re-state that:  "[h]ere, however, the parking regulation is a zoning law, which renders Lanvale inapposite in the Court's mind".  Is the Court saying that the reach of theLanvale decision may be limited, insofar that it cannot be employed against what is clearly a zoning law?  But isn't a legal challenge to the "authority to enact a bona fide zoning ordinance" or to "the requirements of a valid zoning regulation" actually challenges to the "bona fides" or the "validity"?  Maybe not.  We'll see if the plaintiffs try to push this up to the Supreme Court. 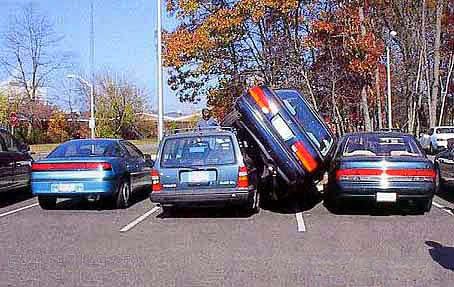