Overview of Merger Investigations: An Excerpt from Merger Enforcement at the European Commission

The number of notifications and phase II investigations fell in 2019,
but remained broadly consistent with trends since 2014. 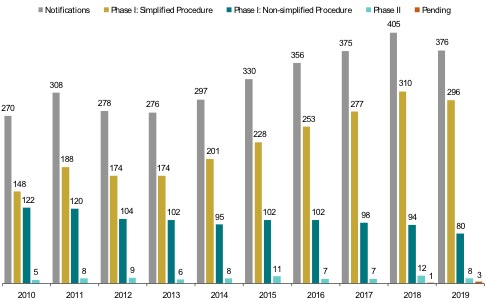 In 2019, 10 per cent of non-simplified procedure transactions proceeded to phase II. In 2018, the corresponding share was 13 per cent.

The share of transactions that were not subject to a simplified procedure has halved since 2010.

Figure 3: Simplified and Non-simplified Procedure Transactions as a Share of Notifications 2010–2019

Read Trends in Merger Investigations and Enforcement at the European Commission.

Read Overview of the Merger Review Process: An Excerpt from Merger Enforcement at the European Commission

Peter Davis leads Cornerstone Research’s European competition practice and is head of the firm’s London office. Dr. Davis is an expert in competition economics and econometrics, focusing on cartel damages, merger inquiries, and market investigations (sector inquiries). He has provided expert testimony in matters before the High Court of England and Wales, the Directorate-General (DG) for Competition, the U.K. Competition and Markets Authority (CMA), and the Financial Conduct Authority. Dr. Davis has also consulted on cases in China, the Netherlands, and South Africa. His work spans a range...