PFAS In Landfills In MN Is Warning Alarm For Waste Management

We have previously written about the impact to waste management companies from ever-increasing scrutiny over PFAS issues in the media and scientific community, at the government level, and within litigation circles. A very recent notice out of Minnesota that almost every closed landfill in the state of Minnesota has detectable levels of PFAS, with over half of them having PFAS levels exceeding the state’s drinking water guidance values, only reinforces our cautionary words. While the state is determining the scope of action that it will take to manage the issue, with EPA action very likely related to PFAS in water in 2021 or 2022, waste management companies cannot wait any longer to assess both current and legacy landfills for which there could be liability issues. Likewise, manufacturing and industrial companies disposing of waste in landfills must conduct due diligence investigations into whether their waste is contributing to PFAS issues in landfills. Failing to do so could cost waste management, manufacturing and industrial companies significant amounts of money.

What Are PFAS and Why Are They a Concern?

Per- and poly-fluoroalkyl substances (“PFAS”) are a class of over 7,000 manmade compounds. Chemists at 3M and Dupont developed the initial PFAS chemicals by accident in the 1930s when researching carbon-based chemical reactions. During one such experiment, an unusual coating remained in the testing chamber, which upon further testing was completely resistant to any methods designed to break apart the atoms within the chemical. The material also had the incredible ability to repel oil and water. Dupont later called this substance PFOA(perfluorooctanoic acid), the first PFAS ever invented. After World War II, Dupont commercialized PFOA into the revolutionary product that the company branded “Teflon.”

Only a short while later, 3M invented its own PFAS chemical – perfluorooctane sulfonate(PFOS), which they also commercialized and branded “Scotchgard.” Within a short period of time, various PFAS chemicals were used in hundreds of products – today, it numbers in the thousands.

The same physical characteristics that make PFAS useful in a plethora of commercial applications, though, also make them highly persistent and mobile in the environment and the human body – hence the nickname, “forever chemicals.” While the science is still developing regarding the extent of possible effects on human health, initial research has shown that PFOA and PFOS are capable of causing certain types of cancer, liver and kidney issues, immunological problems, and reproductive and developmental harm.

PFAS In Landfills In Minnesota

Minnesota has 110 closed landfills in the state. The Minnesota Department of Health recently tested 101 of them for PFAS contamination levels. In 98 of the landfills, PFAS were detected. At 59 of those landfills, the PFAS levels were in excess of the drinking water guidance values set by the Minnesota Department of Health. While the state is determining the best approach to address the extent of the PFAS contamination, waste management companies should be concerned about these findings, especially given the likely federal EPA actions that are coming with respect to PFAS. 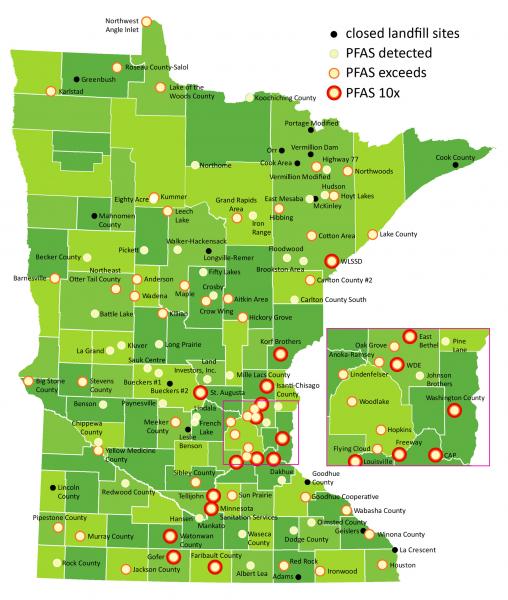 The EPA announced earlier this month two actions related to PFAS that are incredibly relevant to anyone following these issues. First, the EPA issued Final Regulatory Determinations for PFOA and PFOS, which is the final necessary step before the EPA can begin the process of implementing a national drinking water regulation for these two types of PFAS. The Final Regulatory Determination also notes that the EPA may consider other types of PFAS as it comes up with a drinking water regulation, provided that the available science supports inclusion of additional PFAS. While the EPA certainly must follow certain administrative steps to ensure that any final PFAS drinking water rules pass muster, it is not unrealistic to predict that these steps can be accomplished by the close of 2021.

In addition, we have written that the Comprehensive Environmental Response, Compensation and Liability Act (CERCLA) – also known as the “Superfund law” – may have a significant impact on waste management companies with respect to PFAS. During its campaign, the Biden-Harris administration pledged to have the EPA designate PFAS (or some of the thousands of types of PFAS) as “hazardous substances” under CERCLA. The downstream effects of this designation would be massive. Once a substance is classified as a “hazardous substance” under CERCLA, the EPA can force parties that it deems to be polluters to either cleanup the polluted site or reimburse the EPA for the full remediation of the contaminated site. Without such a designation, the EPA can merely attribute blame to parties that it feels contributed to the pollution, but it has no authority to force the parties to remediate or pay costs. CERCLA does not require the EPA to set values for detections that trigger EPA action for “hazardous substances.” Rather, “the release of any quantity of hazardous substance is sufficient to establish liability.”

According to the EPA, the United States has 3,091 active landfills and over 10,000 closed landfills. As the results from Minnesota testing show, these landfills pose concerns for both state and federal regulatory agencies that are actively pursing information regarding sources of PFAS contamination in water. When the EPA adopts certain PFAS drinking water standards, every state will be required to adopt the same PFAS limits at a minimum (states can still adopt more stringent limits, if they wish). As states accelerate testing requirements for drinking water sources of all types to determine compliance with the EPA or state-level PFAS limits, enormous amount of data will be collected regarding the scope of PFAS proliferation in the nation’s water. This data will allow regulatory agencies to determine likely sources of PFAS contamination due to businesses in proximity to those water sources. We predict that landfills will quickly become one of the main targets for enforcement action, and potentially citizen lawsuits for property devaluation, remediation costs, and personal injury. A PFAS lawsuit in Maine just this month shows that this is a very real possibility. Depending on the scope of the PFAS contamination and a company’s ultimate contribution to PFAS problems, this could cost some waste management companies millions of dollars. Should the EPA designate PFAS as “hazardous substances” under CERCLA, landfills run an increased risk of being designated Superfund sites, with associated cleanup costs attached.

Likewise, manufacturing and industrial entities must understand that if landfills are targeted for remediation costs, either through drinking water standards testing or through CERCLA issues, waste management companies will naturally look to reach other potentially responsible entities to contribute to the remediation costs. Typically, this is done through third party lawsuits that can cost companies that disposed of waste in landfills significant sums in not only remediation contribution, but legal costs.

Our prediction remains that in 2021, PFAS drinking water rules will be finalized at the federal level. This will require states to act, as well (and some states may still enact stronger regulations than the EPA). Both the federal and the state level regulations will impact businesses and industries of many kinds, even if their contribution to drinking water contamination issues may seem on the surface to be de minimus. In states that already have PFAS drinking water standards enacted, businesses and property owners have already seen local environmental agencies scrutinize possible sources of PFAS pollution much more closely than ever before, which has resulted in unexpected costs. All companies of all types would be well advised to conduct a complete compliance audit to best understand areas of concern for PFAS liability issues, and ways to mitigate PFAS concerns; however, there is strong reason to believe that waste management companies, and manufacturing and industrial companies will find themselves to be some of the first targets of enforcement action, so planning with knowledgeable and experienced experts is critical.

John Gardella is a Shareholder at CMBG3 Law in Boston, a law firm specializing in the regulatory, litigation, and compliance aspects of numerous environmental and toxic torts issues. He is a member of the firm’s PFAS Team, which counsels clients on PFAS related issues ranging from state violations to remediation litigation. Mr. Gardella has over 15 years of experience litigating environmental and toxic torts matters, including asbestos, PFAS, benzene, lead paint, mold, talc, hazardous waste and pollution matters. He is a successful trial attorney with over 75 verdicts to...