Growing up in suburban New York, 20 miles north of The Bronx, an annual trip into Manhattan to see Rockefeller Center and the dressed windows of Macy's and Saks Fifth Avenue means that whatever we tell you, all New Yorkers, themselves, are tourists.  Don't let us condescend otherwise.

But that's not why we're here.  If you're not familiar, or if you haven't seen Estelle Getty's "Mannequin", each Christmas Season the windows of Saks, Bergdorf Goodman, Barney's and Macy's areturned  into storybook vignettes reminiscent of something you'd see in Hill Valley circa 1955.  It's still done, and it's still glorious.

This is the age, however, of the numbed consumer.  We skip commercials through nimble DVR work, we "X" out of ads on web sites and we, generally, need more to keep us engaged than simple, throwback window-dressing, right?

Turns out that Benetton is up to the task, with an approach of blending traditional advertising display with what's necessary to awe today's saturated and perpetually unimpressed consumer.  In a newly installed advertising campaign in its New York store, in a sort of Christo-meets-Anthony-Christian manner, Benetton features two yarn-covered "people" having sex.  I have no idea why they chose green and orange, but, now that I see it, I simply cannot imagine any other colors. 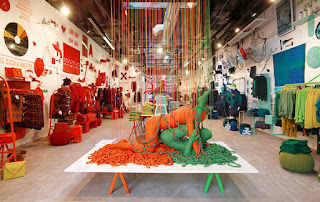 While this is New York -- and, what's more, it is "South of Houston" New York -- might we see similar things in other urban areas in time to come?  I bet we will.  Heck, there's a Benetton store in Raleigh's Crabtree Valley Mall, which is where I buy my yarn beer and yarn cigarettes.  And if we will see similar displays in other areas, what can we expect in terms of public response or attempted private or governmental regulation?

So, let's bring this back to our core thought: land use.  Can this type of display be regulated if it's within a store?  If so, can it be regulated by lease? By local ordinance?  Both?  Is the existence of this display enough to turn a "retail store" under a local zoning ordinance into an "adult store", for example, under the same local ordinance?  Does the paradigm change if Benetton places the yarn-ography in the store window for display rather than within complete confines of the store?

This raises some interesting land use issues, to be sure.