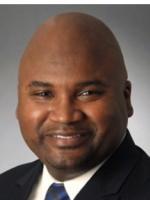 Illinois State Senator, Elgie Sims is Of Counsel and government relations and public policy lawyer with Foley & Lardner LLP. Elgie focuses his practice on government affairs and municipal finance as a member of the firm’s Government Solutions and Public Finance Practices. He has an extensive background representing clients and spearheading complex legislative initiatives before various branches of federal, state and local governments.

Elgie is serving his first term as State Senator of Illinois’ 17th Legislative District after having served four terms as State Representative of Illinois’ 34th House District. He currently serves as Vice-Chairman of the Senate Judiciary Committee, Chairman of the Subcommittee on CLEAR Compliance and as a member of the Appropriations I and II, Criminal Law and Telecommunications and Information Technology Committees. He is also a member of the Commission on Government Forecasting and Accountability, the revenue forecasting arm of the Illinois General Assembly. As former budget director to Illinois Senate Democrats, he helped put millions of dollars toward funds for education, capital improvements, health care initiatives, and economic development. Over the course of his service in the Illinois General Assembly, he has championed legislation focused on improving the quality of Illinois schools, creating economic opportunities and improving our state’s criminal justice system. Elgie also serves as 1st Vice-Chairman and Chair-Elect of the Council of State Governments Midwest, a nonpartisan association of state officials serving all three branches of government promoting excellence in state government through the exchange of ideas to help state officials in 11 Midwestern states and four Canadian provinces shape public policy. He is also an active member of the National Conference of State Legislatures, serving as a member of the Law, Criminal Justice, and Public Safety Committee among others.

Elgie focuses his practice on government affairs and municipal finance as a member of the firm’s Government Solutions and Public Finance Practices.

As part of his government affairs work, Elgie focuses on assisting, advocating for and advising clients on various issues related to procurement, business certification, regulatory compliance, and legislative matters. He has extensive policy experience in areas of public finance, infrastructure, energy, education, housing, telecommunications, and healthcare.