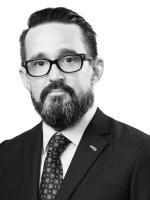 Jim Noe is a partner in the Government Relations Practice Group and a member of the Energy, Environmental & Natural Resources Industry Team. He represents energy, oil and gas, construction, and other industry clients in a broad range of transactions and disputes.

Equal parts CEO, business advisor, and attorney, over the course of his lengthy career Jim has personally led and managed hundreds of multinational business formations, corporate launches, investment deals, commercial transactions, and infrastructure projects in markets around the globe. Drawing on his comprehensive skill set; global business relationships; familiarity with the legislative and regulatory corridors of Washington, DC, and other national capitals; and work in major commercial and financial centers across Europe, Asia, and Africa, Jim provides effective government relations and lobbying counsel to businesses and trade groups in the energy, oil and gas, maritime, construction, healthcare, technology, and other industries.

Among his numerous high-profile engagements was his appointment as primary advocate and spokesman for energy-industry participants following the Macondo (Deepwater Horizon) oil spill. As executive director of the Shallow Water Energy Security Coalition, he testified regularly before US Senate and House committees and held numerous meetings with agency leadership on issues facing exploration and development companies, drilling contractors, and oilfield service companies. One of his many accomplishments while serving in this role was to persuade the federal government to end the impasse that had delayed the issuance of new shallow-water drilling permits and had threatened the financial viability of businesses across this vital sector. Time and again, Jim’s effective advocacy on legal and regulatory issues has helped clients manage challenges and pursue opportunities across economic cycles.

Early in his career, while establishing a reputation as a respected litigator in the oil and gas drilling rig and vessel space, Jim quickly earned the trust of business owners and executives. He successfully argued and won numerous cases before state and federal courts, including high-profile disputes heard in the US Court of Federal Claims. After a period of time in private practice, Jim was named merger and acquisition counsel of a French-Dutch company based in Monaco, for which he led numerous cross-border business initiatives often involving property, operations, and investments on multiple continents. Subsequently, he joined BJ Services Company, where he served as chief corporate counsel and became a member of the executive management team overseeing matters in more than 140 countries, including significant operations in Russia and former republics of the Soviet Union.