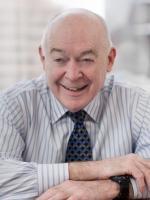 John offers clients the benefit of decades of experience as a top environmental lawyer, a leader of major bar and environmental organizations, and a distinguished military career.

John provides strategic counsel on high-stakes environmental and natural resources litigation, civil and criminal enforcement, and compliance. Working with clients makes the practice of law worthy and valuable to him as they advance strategic needs while protecting human health and the environment.

For more than two decades, John served as a senior leader on environment and natural resource matters at the United States Department of Justice (DOJ), where he supervised some of the department’s most significant litigation, including the Exxon Valdez oil spill, Love Canal, and Bunker Hill litigation. As the Senate-confirmed, Assistant Attorney General, ENRD, John worked on the most high-profile environment cases, and personally negotiated the multi-billion dollar resolutions of the Deepwater Horizon oil spill and the Volkswagen emissions scandal. These cases required a great deal of coordination, expert assistance, and sophisticated management of numerous players to reach successful outcomes. This experience has given John insight into the workings of large corporations, as well as into the challenges that major companies face in lawsuits.

John’s leadership is a defining characteristic of his long and distinguished legal career. Before joining the DOJ, John was the Chief Legislative Counsel of the U.S. Army. After graduating from the United States Military Academy at West Point, John served in Airborne, Ranger, and Special Forces units in Germany and Vietnam. His subsequent military assignments include as a criminal prosecutor in Germany and civil trial lawyer in the Pentagon; Chief of Litigation Branch, Europe; General Counsel, Defense Nuclear Agency; Staff Judge Advocate in Germany; and Director of Administrative and Civil Law, Judge Advocate General’s School, Charlottesville, Virginia. His military education includes being a Fellow, Army War College, and the Command and General Staff College. He is a graduate of the University of Santa Clara Law school (summa cum laude) and the University of Virginia (MA with honors).