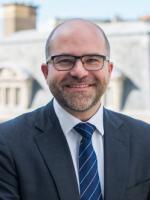 José represents private and public entities, as well as sovereign states in commercial and investment arbitration proceedings. He also regularly sits as arbitrator in international arbitrations administered under the rules of various international and regional institutions, as well as in ad hoc proceedings under a wide variety of applicable laws. He has worked extensively with clients and entities in Latin America, Africa, Western and Eastern Europe, the Middle East and Asia and has a particular focus on disputes in the construction and energy sectors.

Before joining the firm, José served at the ICC International Court of Arbitration where, in addition to Deputy Secretary General, he occupied the positions of Acting Secretary General, Managing Counsel, Counsel and Deputy Counsel. During the course of his career at the ICC, he supervised thousands of international arbitration cases and reviewed an equal number of arbitral awards in a wide range of jurisdictions and economic sectors including energy, construction, telecommunications, transportation, banking and finance, information technology and general commerce and trade.

José also played an important role in key strategic initiatives at the ICC, such as the 2012 and 2017 revisions of the ICC Rules of Arbitration and the drafting of the revised 2017 Rules of ICC as Appointing Authority. He was also instrumental in designing and implementing ICC Court’s policies to increase efficiency, transparency and diversity in international arbitration. José further assisted in the establishment of the ICC Court case management offices in New York City and Sao Paulo, the ICC Arab Arbitration Group and the opening of an ICC Court representative office in Shanghai.

Articles in the National Law Review database by José Feris