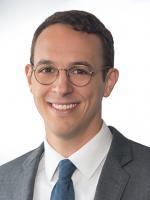 I became a lawyer to fight for people who are denied their right to live in a fair society. By representing individuals who face discrimination at work or are silenced from speaking out against misconduct in their workplace, I hope to empower them to realize the promises of justice and equality that are at the foundation of our legal system.

"By representing individuals who face discrimination at work or are silenced from speaking out against misconduct in their workplace, I hope to empower them."

Prior to joining KMB, Mr. Abboud worked as a Civil Rights Fellow in the Office of the Attorney General of the State of New York.  There, he investigated and settled cases involving a broad range of civil rights matters, including employment and housing discrimination, voting rights, genetic privacy, and redlining in the residential mortgage market. Mr. Abboud also co-ran the AG’s statewide voter hotline during the 2016 Presidential Primary.

During his first summer as a law student, Mr. Abboud worked as a research assistant for the American Law Institute, contributing to the International Torts to Persons Project for the Restatement (Third) of Torts. Throughout his second summer, he worked as a student attorney at the Harvard Legal Aid Bureau, representing victims of domestic violence in Probate and Family Court, as well as in appellate and administrative proceedings.

Prior to law school, Mr. Abboud worked as a legal assistant a Maglio, Christopher & Toale, P.A., a plaintiff-side medical products liability firm. He received his B.A. in Philosophy from the New College of Florida.

For his fierce and tireless work advocating for his clients, Mr. Abboud was recognized as a "Rising Star" by both the National Law Journal and Law360 for 2019.

In November 2018, Mr. Abboud was recognized by the Women's Bar Association with the "Dare to Make an Impact" award for his work on Dr. Christine Blasey Ford's legal team.

Mr. Abboud is a member of the New York and District of Columbia bars.