The Federal Trade Commission (FTC) and Department of Justice (DOJ) continue an active docket challenging M&A transactions. DOJ is resolving antitrust reviews significantly faster than the FTC, following DOJ’s 2018 policy establishing a six-month target. The DOJ also made use, for the first time, of its authority to arbitrate a market definition dispute, potentially opening the door for a new tool the DOJ could employ to resolve challenges more rapidly.

The European Commission (EC) agreed to clear, subject to conditions, the acquisition of broadband and energy networks following lengthy Phase 2 investigations. Meanwhile, the national European regulators opened new in-depth investigations into commercial radio advertising, software as a service for airlines, autonomous sea surface vehicles and the promotion of live music events (all in the UK) and prohibited the merger of two recyclers (Germany).

The Administrative Dispute Resolution Act of 1996 gives the DOJ the authority to arbitrate cases under Section 7 of the Clayton Act. The DOJ recently agreed with the parties in the Novelis/Aleris deal to let an arbitrator decide their dispute on the relevant market. This case represents the first application of this authority. DOJ antitrust chief Makan Delrahim called the process “truly groundbreaking” and suggested it “could prove to be a model for future enforcement actions … bring[ing] greater certainty for merging parties and [preserving] taxpayer resources.” It remains to be seen how frequently this new process will be employed.

When parties enter into a settlement with the DOJ related to a proposed merger, that settlement is reviewed by a federal judge under the Tunney Act to ensure the settlement is in the public interest. Judge Leon’s decision to review antitrust violations alleged by outside parties during his Tunney Act review of a proposed settlement involving the CVS-Aetna transaction, rather than relying only on the allegations provided by the DOJ, marked a departure from past practice. The resulting mini-trial slowed down the Tunney Act process, but Judge Leon ultimately approved the settlement.  Going forward, the DOJ may need more preparation before defending settlement agreements in court.

The French competition authority is expected to revise its merger control guidelines to provide clarity on identifying mergers that do not raise competition concerns, on procedural infringements, and the suitability of behavioural commitments to remedy specific concerns. The revised guidance should be helpful to assess what constitutes gun jumping.

The UK Competition and Markets Authority (CMA) has updated its guidance on interim measures reflecting a move toward stricter adherence to procedural rules, particularly to prevent pre-clearance integration between parties to a transaction. The CMA has also been more aggressive in implementing interim enforcement orders to prevent merging companies from integrating assets while the CMA reviews the transaction.

The German government is looking to provide new tools to the German Federal Cartel Office (FCO) to investigate “killer acquisitions” in digital markets through a revision of the German Act against Restraints of Competition (ARC). Ever since the acquisition by Facebook of Whatsapp, the FCO and the German government have searched for ways to investigate transactions where large firms acquire smaller innovative targets to discontinue innovative projects and thereby preempt future competition. 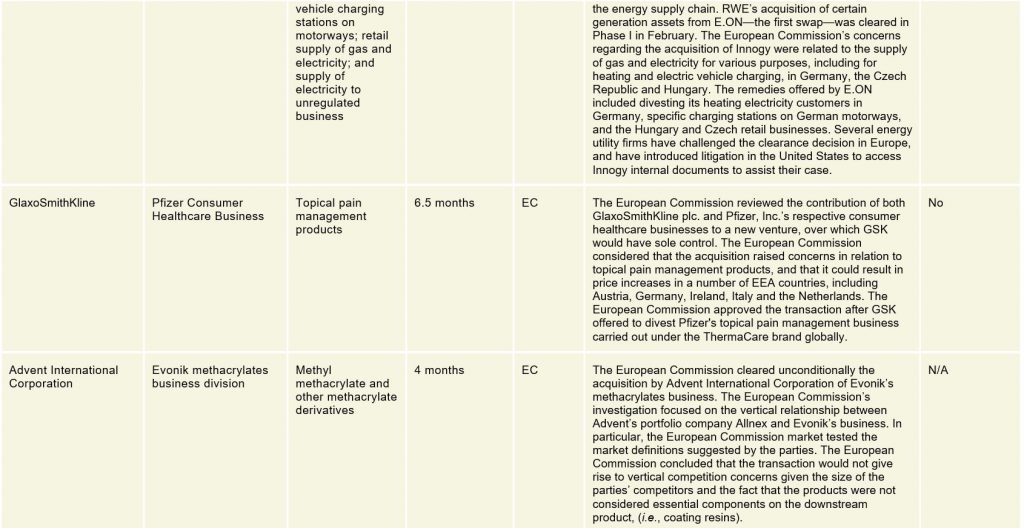 [3] The information in this column summarizes the government’s allegations. McDermott Will & Emery LLP offers no independent view on these allegations.https://d1198w4twoqz7i.cloudfront.net/wp-content/uploads/2019/11/25184819/image-3-1-1024x489.jpg

Max Küttner focuses his practice on antitrust, competition and trade law. He has advised on numerous cross-border M&A transactions from negotiation to the notification at various national/supranational competition authorities.

Prior to joining McDermott, Max worked at the UK Competition & Markets Authority where he was a Case Officer on several merger cases across a range of sectors. Max has also worked at international law firms in Germany, Belgium and the UK on competition matters with international dimension.