ATDS Claim Dismissed Under Facebook: Triggered Calls from Alarm Company Do Not Give Rise to TCPA Claim

As I’ve explained a few times now, triggered/alert text messages and calls are lowest risk following Facebook. This is true because they are sent on a one-to-one basis and in response to the occurrence of an event–not due to a dialer choosing what number to call or text next. 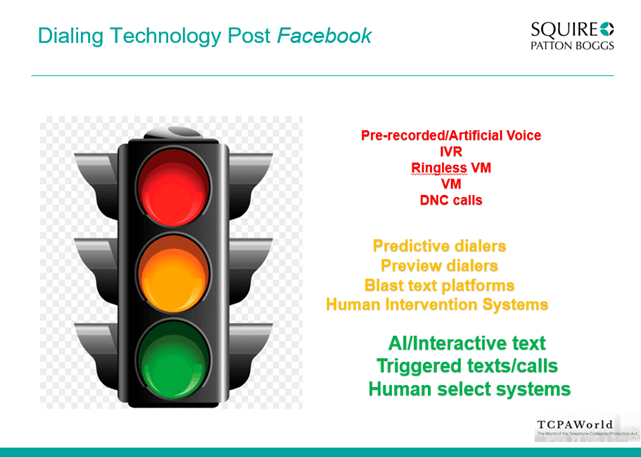 The latter is problematic because a R&SNG may be operating in the background determining dialing sequence. But triggered alerts are precisely that–triggered. No dialing system determines what number to call–a real-world event must transpire for a message or call to result. So such calls cannot be sent with the use of an R&SNG (which just leaves a flimsy “capacity” argument to contend with.)

In Watts v. Emergency Twenty Four, No. 20-cv-1820, 2021 U.S. Dist. LEXIS 115053 (N.D. Ill. June 21, 2021) the Court faced a classic alert situation–calls that were made by an alarm company to alert business owners that an alarm had been triggered on their property. Unsurprisingly, the Court found the calls at issue were inconsistent with ATDS usage.

At issue in Watts were calls allegedly made to a phone after the Plaintiff had stopped working for a company. Despite his having asked for calls to stop the Defendant continued to alert his phone every time a former employer’s alarm was triggered.

Plaintiff argued an ATDS was used because the calls were sent automatically. But as we all know, post-Facebook “automatic” isn’t the test. Random and sequential number generation is. And while the generation of any number–not just phone numbers–is relevant due to FN7, a system that just pushes out calls or texts in response to a purported break-in at a business is certainly not generating numbers in connection with the calls.

Nonetheless, Plaintiff alleged Defendant’s system “is capable of contacting thousands of people a day,” “stores numbers. . . of persons who have not given their express written consent to be called or who have since withdrawn their consent,” and is used to call “Plaintiff and others continually and at all hours of the day and night.”

The Court, quite properly, found “[t]hese facts, however, do not support an inference that Defendant’s system is an ATDS under the interpretation set forth in Duguid. Indeed, the alleged facts suggest that instead of randomly or sequentially generating Watts’s number, Defendant’s equipment stored Watts’s number in a database and dialed that stored number because he was an employee at a business that used Defendant’ alarm notification system. We observe that the nature of Defendant’s alarm notification calls suggests that they likely were targeted at specific individuals.”

So there you go folks. Another case illustrating the important difference between blast dialers–that may have an R&SNG involved–and triggered calls and texts, which will not.

Eric Troutman is one of the country’s prominent class action defense lawyers and is nationally recognized in Telephone Consumer Protection Act (TCPA) litigation and compliance. He has served as lead defense counsel in more than 70 national TCPA class actions and has litigated nearly a thousand individual TCPA cases in his role as national strategic litigation counsel for major banks and finance companies. He also helps industry participants build TCPA-compliant processes, policies, and systems.

Eric has built a national litigation practice based upon deep experience, rigorous...