The Bureau of Ocean Energy Management (BOEM) will hold its next offshore wind lease auction on 11 May 2022, for two lease areas in the Carolina Long Bay. The lease areas comprise 110,091 acres off the coast of North and South Carolina. The auction date will occur weeks ahead of a 10-year moratorium on offshore energy leases imposed in 2020 by the Trump administration prohibiting auctions of leases for wind, in addition to oil and gas, off the coasts of North and South Carolina beginning on 1 July 2022.

Notably, the final sale split the single lease area into two adjacent lease areas and reduced the lease areas to 110,091 acres. The reduced lease size removed all areas within 20 miles of the shoreline, and accommodates a planned navigational fairway by the U.S. Coast Guard. Despite the reduced size, the Carolina Long Bay lease areas have the potential to generate up to 1.3 gigawatts of offshore wind energy. 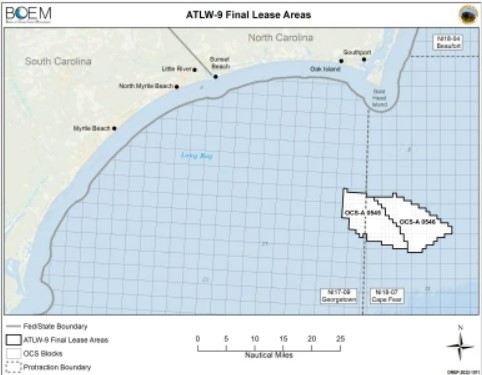 The final sale notice identified 16 qualified bidders who may participate in the auction, including several entities affiliated with winners from the recent New York Bight auction. This auction will incorporate several novel changes that differ from BOEM’s auction format used in the New York Bight auction. Bidders will no longer be limited to winning only one lease area. By submitting a larger pre-auction deposit, an individual bidder may qualify to win both lease areas. Bidders who make the additional deposit will be able to submit two bids in each round, which may change bidding strategy. Affiliates of the Bidder may not compete against each other, however, and only one affiliated Bidder may participate in the auction.

This auction will also feature a multiple-factor auction format that rewards Bidders who incorporate programs to advance domestic labor and supply chain capabilities. Under this bidding system, bidders may qualify for a non-monetary factor that BOEM will treat as a credit against the winning bid price. The credit must be used to fund development of a U.S. domestic workforce or supply chain for the offshore wind industry. BOEM will establish a panel to determine which bidders qualify for the non-monetary factor based on each bidder’s financial form submissions, and will notify the qualifying bidders in advance of the auction. Bidders must explain their strategies and verifiable actions for how the bidder would use these contributions in their financial forms. Qualifying bidders may submit bids that include a credit of up to 20% of the total bid amount. Of this 20% credit, the bidder is required to contribute 80% of the credited amount toward workforce training programs or development of a domestic supply chain. Effectively, the non-monetary factors acts as a discount to the cash bid price because only 80% of the credit amount must be contributed. Winning bidders are not required to demonstrate payment of the contribution amount until the bidder submits a facility design report.

This new multiple-factor format could increase the total amounts that developers are willing to bid by providing a discount as well as flexibility in method and timing of payment. BOEM has indicated that it will schedule a lease auction for lease areas off the California coast later this year, and may use a similar multi-factor approach. Similar to previous auctions, the auction will proceed until there is only one bid for each of the two lease areas. BOEM will announce the provisional winners soon after the auction ends.

Bidders should be aware of the following timeline and deadlines:

New lease stipulations will require early and regular engagement with tribal nations, ocean users, underserved communities, agencies, and other stakeholders who may be affected by the offshore wind development. Leaseholders must report these outreach efforts as part of their semi-annual progress reports. BOEM further encourages leaseholders to participate in a planned approach to transmission solutions that minimizes impacts, and indicates that it may condition approval of construction and operations plans on incorporation of certain transmission methods. The leases will further require that the leaseholder take every reasonable effort to secure project labor agreements for the construction phase that will apply to all contractors for the project.

BOEM is continuing its momentum by building off of the success of the New York Bight auction and is accelerating the auctions of new offshore wind energy lease areas. The Carolina Long Bay auction will provide further insight into whether the high bid prices observed in the New York Bight auction are a continuing trend, and the new multi-factor auction format provides additional incentives to accelerate development of the domestic workforce and supply chain.

Industry participants should continue to monitor as BOEM announces new call areas, and as existing call areas progress through environmental review to lease auction, such as in the Gulf of Mexico and off the West Coast in California and Oregon.

Mr. Baird is a partner in the Raleigh office and focuses his practice on environmental matters, including litigation and regulatory matters, and environmental aspects of real estate, lending, and mergers and acquisitions transactions. Mr. Baird regularly advises manufacturing clients regarding environmental regulatory and compliance matters. He routinely negotiates with state and federal environmental agencies on behalf of private parties, handles administrative appeals, enforcement defense, and permitting matters, and oversees environmental due diligence and clean up...

Mr. Gish is of counsel at the firm’s Charlotte and Seattle offices where he is a member of the power practice group. Mr. Gish represents clients in the energy industry, including hydropower operators and renewable energy developers, before state and federal regulatory bodies and in all aspects of complex project development including defending permit appeals at the administrative and judicial level. Mr. Gish also counsels clients with regard to compliance with federal, state and local environmental regulations.

Kimberly Frank is counsel in the firm’s Washington, D.C. office, and is a member of the power practice group. Kimberly represents clients in a broad array of electric utility regulatory matters before the Federal Energy Regulatory Commission (FERC) and state regulatory agencies and in appeals of these agencies’ decisions.

Kimberly helps clients navigate the complex rules of the FERC-regulated regional wholesale markets. She helps them evaluate and advocate for rule changes in the energy, capacity, and ancillary services markets administered by the regional transmission organizations...