The flurry of offshore wind activity off the U.S. Eastern Seaboard continues, as the Bureau of Ocean Energy Management (“BOEM”) has announced recently it will hold an auction on 23 February 2022, to lease six new areas for offshore wind development in the New York Bight. The six lease areas will be located off the coasts of New York and New Jersey and will comprise 488,201 total acres. Such acreage should be sufficient to develop an estimated 5.6 gigawatts (GWs) of new offshore wind capacity, enough to power nearly two million homes. The six new lease areas will add to the 18 existing lease areas for offshore wind development that currently exist off the U.S. East Coast. Continuing this momentum, BOEM intends to conduct several more auctions that will open up new lease areas along the West Coast and Gulf of Mexico, and is already advancing environmental reviews to support those areas.

BOEM’s New York Bight announcement has been more than three years in the making. On 11 April 2018, BOEM issued a call for commercial leasing for the New York Bight area, which included more than 1.7 million acres for consideration. Over the next few years, BOEM received stakeholder input and consulted with various agencies, and on 26 March 2021, issued an Identification Memorandum that identified more than 800,000 acres across five Wind Energy Areas in the New York Bight. On

On 21 December 2021, BOEM issued its Final Sale Notice Decisional Memorandum that describes the final selection of lease areas, parameters for the auction format, and proposed stipulations to be included in the lease agreements. BOEM again reduced the total acreage that will be available for lease to 488,201, tailoring the lease area boundaries to reduce impacts to the fishing industry and to accommodate shipping navigation and requests by the U.S. Coast Guard. The final lease areas are as follows: 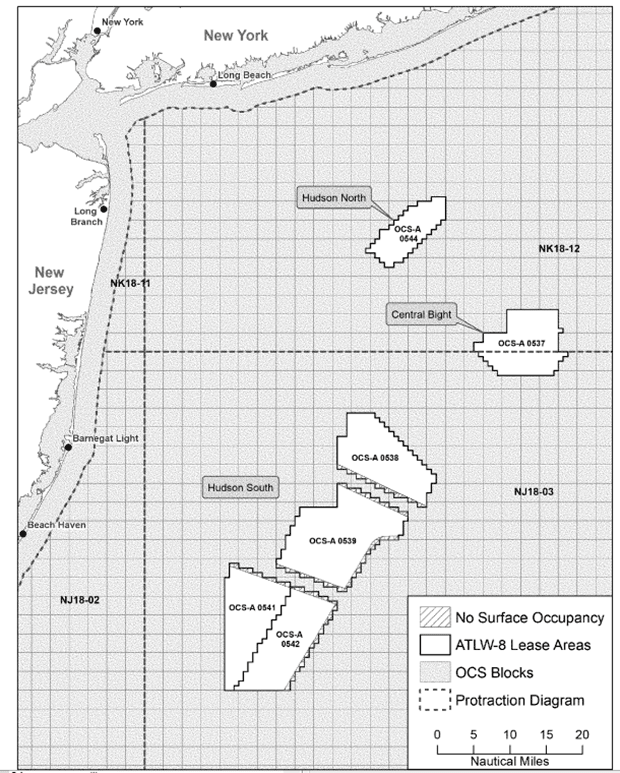 On 14 January 2022, the Final Notice of Sale was published in the Federal Register, including some new rules. Under BOEM’s new auction format, bidders will be limited to winning only one lease area. As before, only one affiliated entity is permitted to participate, and affiliates may not compete against each other. New recommended lease stipulations include requirements that developers enter into project labor agreements to pay laborers at prevailing wage rates; engage in community outreach with local tribes, the fishing industry, and ocean users; and describe planned domestic supply chain activities and investments. BOEM further recommends that incentives be made available in the form of an operating fee credit for developers that use locally manufactured components.

Bidders should act now, as there are several fast-approaching deadlines and the timeline leading up to the auction is as follows:

While BOEM’s New York Bight announcement marks another significant milestone for the offshore wind industry, there is already litigation from a group of local residents who oppose offshore wind development in the New York Bight. On 10 January 2022, Save Long Beach Island (SLBI), a group of individuals claiming to be within the view shed of the proposed New York Bight Wind Energy Areas, filed a complaint in the U.S. District Court for the District of Columbia alleging that BOEM was required to conduct an environmental assessment and prepare an environmental impact statement before its 26 March 2021 Identification Memorandum. In public statements, SLBI has stated that its members’ concerns relate primarily to aesthetic impacts, similar to concerns voiced by other coastal communities that have opposed proposed offshore wind project sites along the East Coast over the past several years.

BOEM must first complete an environmental review process before leasing federal waters and approving any specific project. On 11 January 2022, BOEM advanced an environmental review evaluating potential impacts of offshore wind development in the Humboldt Wind Energy Area off the Northern California coast, and the deadline for public comments is 10 February 2022. BOEM is currently working with Oregon agencies to identify call areas off of the Oregon coast, and could make an announcement for further study of these areas soon. BOEM also announced it plans to study a 30 million acre area of the Gulf of Mexico between Louisiana and Mexico for potential Wind Energy Areas. Once review is complete, BOEM is planning additional auctions for offshore wind lease areas in federal waters off the Carolinas, the Gulf of Mexico and the West Coast of the United States. For context, BOEM’s most recent auction occurred in December 2018 and included 390,000 acres off the coast of Massachusetts. That auction resulted in an award of three lease areas for US$405 million.

OTHER RECENT OFFSHORE WIND DEVELOPMENTS ON THE EAST COAST

The states of New York and New Jersey also very recently announced significant offshore wind commitments. On 17 January 2022, the New York Energy Research and Development Authority (NYSERDA) announced it had finalized purchase and sale agreements for Offshore Wind Renewable Energy Credits generated by the Empire Wind 2 and Beacon Wind 1 projects. Both projects were selected as part of New York’s second round solicitation in January 2021, and executed procurement awards that commit them to build 2.49 GWs of offshore wind. On 5 January 2022, New York Governor Kathy Hochul announced her state’s intent to invest an additional $500 million in ports, manufacturing, and supply chain infrastructure to support offshore wind. This recent investment builds upon the US$200 million that New York allocated to port infrastructure in 2020. By leveraging this initial US$200 million investment New York was able to garner an additional $644 million of investment through private funding. In July 2021, New Jersey completed its second round offshore wind solicitation and selected two projects that have proposed to build 2.658 GWs of offshore wind generation.

In January 2022, BOEM also announced the signing of an interagency memorandum of understanding (MOU) with the National Oceanic and Atmospheric Administration (NOAA) to advance offshore wind while ensuring cooperative use of the outer continental shelf (OCS) and protecting marine biodiversity. The MOU will serve as a framework for the interagency cooperation on offshore wind siting, permitting, construction and operation, specifically outlining the agencies “commitments to: identify areas on which they can better coordinate, proactively refine administrative procedures, implement efficiencies in their mission areas, and specify mechanisms for cooperation and communication.”

The task force’s meeting is open to the public and parties interested in attending should register here.

The availability of the New York Bight lease areas represents a significant step toward achieving the Biden administration’s target of 30 GWs of offshore wind capacity by 2030. The additional lease areas are also necessary for New York and New Jersey to achieve their own ambitious offshore wind targets of over 16 GWs by 2035. These lease areas are yet another indication that the offshore wind industry on the East Coast is maturing quickly. BOEM’s efforts to better coordinate with other federal agencies and its plans for future lease auctions along the West Coast and Gulf of Mexico demonstrate the Biden administration’s commitment to moving the nascent offshore wind industry forward in the United States.

Interested bidders should act now to ensure they meet all required deadlines to participate in the upcoming auction. More broadly, industry stakeholders should take notice of the accelerating momentum of the offshore wind industry in the United States. The fully integrated Offshore Wind Team at K&L Gates can assist clients considering a bid in the New York Bight auction and in understanding the current state of BOEM’s regulatory developments.

Notably, Gail has been on the cutting edge of issues involving site remediation and environmental justice. She has spoken before various professional and trade...