Does Wireless Media Innovations Have a Lock on Tracking Shipping Containers in a Shipping Yard?

Wireless claims United States Patent No. 6,148, 291 (the ‘291 Patent) and United States Patent No. 5,712,789 (the ‘789 Patent) have been directly infringed by Flowers by its use of “yard management systems and operative methods associated therewith to monitor the locations, movement, and load statuses of containers in at least one of [Flowers’] facilities.”  Literal infringement as well as infringement under the doctrine of equivalents is alleged.  Wireless asserts that the infringement has been willful (as Flowers has had knowledge of the patents of Wireless “at least as of the filing date of this Complaint.”

The complaint is fairly described as a “notice pleading” that does not delve into the nuances of the Flowers monitoring systems or the Wireless patent claims.  The ‘291 Patent is a combination of detailed specifics in the specifications and broadly written claims.  Pictured below is a composition of selected figures from the patent: 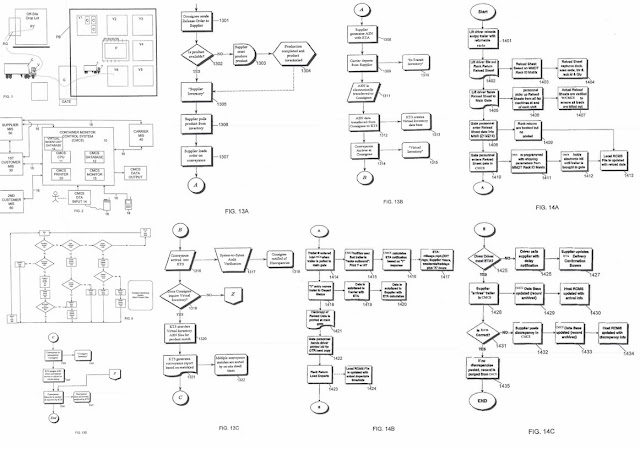 Contrasting with the complexity of the drawings and the 948 lines describing the preferred and alternate embodiments within the 47 page patent is the relatively simple first and twenty-first claims – reprinted below:

A computerized system for monitoring and recording location and load status of shipping containers relative to a facility with an associated yard defined by a boundary within which containers are to be monitored by the system, and a controlled entry point to the boundary, the system comprising:

means for recording identification codes of containers which enter the boundary,

means for generating reports of recorded information on locations and load status of containers within the boundary, and

means for generating reports on container locations and load status relative to designated docks associated with a facility.

A method for using a computer to monitor usage of one or more docks associated with a facility, wherein the usage involves the presence or absence of a container at a dock, the method comprising the steps of:

(a)    recording the presence of an identified container at a particular identified dock,

(b)   recording the absence of an identified container at a particular identified dock,

(c)    producing a report which identifies monitored docks and identifies containers present at identified docks, and also identifies docks at which a container is absent.

The ‘789  Patent is similar in scope, but it does not require the use of a computer.