EPA Proposal Acknowledges Areas With Dangerous Air Pollution, But Leaves Some Out and Has Failed to Step in When States Haven’t Protected Residents

Two weeks ago, the Environmental Protection Agency published proposals to designate 12 areas of the country—including Alton and Marion, Illinois; Jefferson and Posey, Indiana; DeSoto Parish, Louisiana; Anne Arundel and Baltimore, Maryland; St. Clair, Michigan; Franklin, Missouri; Muskogee, Oklahoma; and Freestone, Rusk, and Titus, Texas—as “nonattainment” for the dangerous pollutant sulfur dioxide, or SO2.  While EPA won’t finalize the designations until July, what needs to happen next is for the agency to recognize that there are far more than 12 areas across the United States that are in need of having their air cleaned up.

But to explain the importance of all this, we need to back up a bit.  One of the most powerful tools under the Clean Air Act for protecting the air we breathe is something called an “ambient air quality standard.”  The way it works is this: EPA follows the science and determines the level for certain pollutants above which it’s unsafe for human health, and then issues standards for those pollutants.  For SO2 pollution, it’s 75 parts per billion.  EPA then determines what parts of the country have safe air quality, and what parts have air quality worse than the standard.  These latter areas are called “nonattainment,” and the Clean Air Act imposes strict requirements on states to fix their air quality problems, and directs EPA to step in and handle things if states don’t shoulder their responsibility.

Although EPA set the SO2 standard in 2010, since then, implementation has been stymied.  EPA hasn’t designated many areas, and even with the areas it has already designated as nonattainment, states have almost universally failed to develop the required plans to reduce SO2 pollution and EPA has failed to step in solve the problem expeditiously--including in Detroit, Michigan.  The consequence is that hundreds of thousands of residents are regularly breathing levels of pollution the agency knows causes severe public health impacts, particularly on children and the elderly.

SO2 is a nasty pollutant.  Exposure to even low concentrations for even short durations (as little as five minutes) can trigger asthma attacks and respiratory distress. In fact, studies show correlations between short-term exposure and increased visits to emergency departments and hospital admissions for respiratory illnesses, particularly in at-risk populations including children, the elderly, and asthmatics.  In places like Detroit, where everybody—EPA, Michigan Governor Rick Snyder, and the polluters themselves—know that the air is unsafe, the asthma rates are high, the public is suffering, but state and EPA action is both missing and overdue.

We know how to fix this problem. Almost all SO2 pollution comes from a tiny handful of sources: coal-fired power plants. 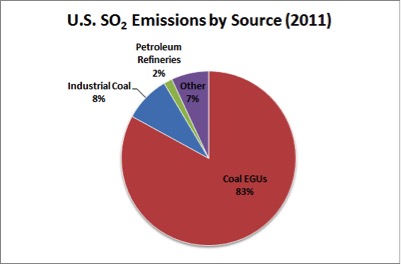 That means that restoring clean air is as simple as modeling the pollution from the few hundred remaining coal plants in the country, and ensuring that they have emission limits in place that protect our air and our communities.

But why use modeling instead of air monitors to assess the safety of the air we breathe?  Two reasons: First, when almost all the pollution comes from just a few large sources, modeling is actually much faster, cheaper, and more accurate than setting up a monitoring network and waiting years for the data to come in.  EPA has carefully developed modeling software for this purpose, and has subjected it to more rigorous field testing than any other modeling tool it has ever created.

Second, the sad fact is that the nation’s air monitoring network for SO2 pollution is woefully inadequate.  During the Reagan administration, the U.S. had roughly 1,500 SO2 pollution monitors, which sounds like a lot, until you realize just how big a country the U.S. is—there are more than 3,000 counties in the U.S.  But since then, the number has dropped even further, to less than 450 (in a country spanning 3.8 million square miles!).  And none of them are where they need to be to keep an eye on peak concentrations of SO2 pollution: they are often miles away from large polluting sources or are in places like offshore islands, where the air they measure is a lot cleaner than the air we actually breathe.

This is what is so critical about EPA’s proposals: the new designations would be based on modeling.

Of course, not everybody is likely to be happy about this.  Plenty of states and industry submitted modeling to EPA (rather suspiciously, industry modeling rather universally shows impacts just below the limit), but oftentimes such analysis was skewed towards hiding the true impacts of the pollution.  In some cases, states submitted modeling not of what power plants actually emitted, but what the state wished they had emitted. In others, states or industry modelers used unapproved software add-ons that cripple the model and unsurprisingly yield results purporting air quality to be much better than it actually is.  This is a bit like calculating how much you’d have in your savings account if you’d been stashing away a lot more money than you actually had, and pretending the bank gave you a much better interest rate than it actually did.  It might be a fun exercise, but it has little to do with reality.

Nor did EPA go as far as it should.  While EPA in this round of proposed designations was looking at just 66 areas total, many more than the 12 it identified as having bad air should be considered as “nonattainment” for SO2 pollution.  Places like Gibson County in Indiana, and additional parts of Illinois, Michigan, Louisiana, Ohio, and regions in Texas all have unsafe air quality because of coal plants, and EPA should designate them in nonattainment as well.

The first step in fixing a problem is recognizing that there is a problem, so EPA should not shy away from calling a spade a spade and finalizing nonattainment designations for these areas. And, where problems have already been identified--such as in Detroit--EPA should stop sitting on its hands and move expeditiously to protect the breathing public.

In October 2010, Zack Fabish joined the Sierra Club as a project attorney, focusing his efforts on coal retirement in the northeast. Before joining the Club, Zack did civil litigation work for a bay area law firm. Zack earned his BA from Whitman College, and his JD from Stanford Law School. In his spare time, Zack enjoys backpacking, glassblowing, and a small handful of other gerunds generally fitting into the larger category of "outdoors-y noncompetitive".