Exclusion of Evidence at the PTAB - Does it ever happen?

Experienced PTAB practitioners know that the Board rarely grants motions to exclude evidence in Post Grant proceedings. In this article, we look beyond the grim anecdotes and provide some statistics, as well as the Board’s typical reasons for declining to exclude. Finally, we examine a sample of the very few cases in which the Board has actually excluded evidence.

Of the 1,105 motions to exclude decided since 2015, the Board granted the motion in full in only eight instances,[i] while in 69 cases the motions were denied in part and granted in part. Going all the way back to 2012, the Board has granted or granted-in-part just 7% of the 1,329 motions decided. 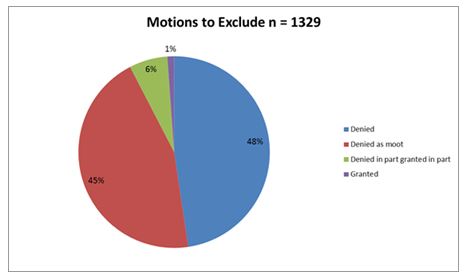 Interestingly, there was a significant decline in the number of motions decided in 2017 as compared to 2015 and 2016. Part of that drop off is likely a function of fewer cases making it to final written decision in 2017, but the statistics do reveal at least some reluctance among parties to spend the time and money to file motions to exclude, perhaps in view of the low success rate. For example, while final written decisions dropped 23% between 2016 and 2017, motions to exclude decisions dropped 35%. 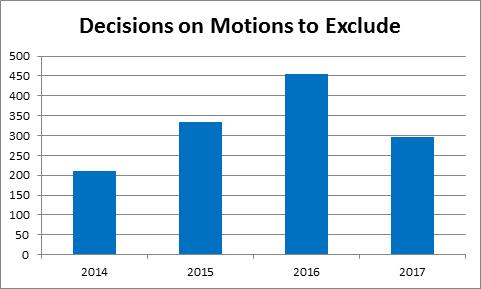 The statistics confirm that the overwhelming majority of motions to exclude are denied and, at least over the last two years, the number of motions filed and decided has fallen significantly.

In declining to exclude evidence, the Board has consistently provided three primary reasons. First, the Board has indicated that it prefers not to exclude evidence because “there is a strong public policy for making all information filed in an administrative proceeding available to the public.” Liberty Mut. Ins. Co. v. Progressive Cas. Ins. Co., CBM2012-00010, Paper 59 at 40 (PTAB February 24, 2014).

Finally, the Board has indicated its preference for maintaining a complete record for any potential appellate review, which generally serves two related purposes. First, the Board is able to minimize the chance of reversal by determining the weight of evidence “without resorting to formal exclusion that might later be held reversible error.” Informatica Corp. v. Protegrity Corp., CBM2015-00021, Paper 38 at 52 (PTAB May 31, 2016). Second, the Board is able to provide the appellate court with a full record for review. Gnosis S.p.A. v. S. Alabama Med. Sci. Found., IPR2013-00118, Paper 64 at 43 (PTAB June 20, 2014) (citing Donnelly Garment Co. v. NLRB, 123 F.2d 215, 224 (8th Cir. 1941) (“If the record on review contains not only all evidence which was clearly admissible, but also all evidence of doubtful admissibility, the court which is called upon to review the case can usually make an end of it, whereas if evidence was excluded which that court regards as having been admissible, a new trial or rehearing cannot be avoided.”)).

These factors explain the dismal success rates of motions to exclude evidence before the PTAB.

The most common motions to exclude center on: 1) Questioning an expert or declarant’s credibility or qualifications; 2) Moving to exclude new evidence in a supplemental filing; 3) Relevance; and 4) Authenticity.

Parties seem to get essentially no traction on the first three categories. The Board has concluded that Motions to Exclude based on a declarant’s qualifications go to the weight, but not admissibility, of the evidence. The Board believes it is capable of determining how much an expert’s opinion should matter. We found no examples of a movant successfully excluding a declarant’s testimony based on credibility or qualifications. The Board also typically holds that a Motion to Exclude is not the proper vehicle for challenging “new” evidence or arguments. The Board has stated that “[w]hether a reply contains arguments or evidence that are outside of a proper reply under 37 CFR § 42.23(b) is left to [the Board’s] determination.” Blackberry Corp. v. Zipit Wireless, Inc., Case IPR2014-01508, Paper 49 at 40 (PTAB March 29, 2016). With respect to relevance, the Board often cites the 8th Circuit decision in NLRB, arguing that the panel is capable of determining admissibility and weight. See Corning, IPR2013-00053 Paper 66 at 19.

Our review of successful motions to exclude, however, indicates that the Board is receptive to authenticity challenges in certain situations. For example, in the context of antedating prior art, the PTAB has applied a heightened standard for authenticating documents corroborating an alleged inventor’s testimony of prior invention. See Neste Oil Oyj v. REG Synthetic Fuels, LLC, Case IPR2013-00578, Paper 54 at 4 (PTAB March 12, 2015). In Neste, the PTAB observed that “in order for a contemporaneous document to be accorded any corroborative value, the testimony of a witness other than the inventor . . . is generally necessary to authenticate the document’s contents as well as to explain the witness’ relationship to the document in question.” Id. (citing Horton v. Stevens, 7 U.S.P.Q.2d 1245, 1988 WL 252359 at *4 (BPAI Mar. 8, 1988)). The panel then went on to exclude the inventor’s undated and unsigned laboratory notebooks as unauthenticated. Id. at 4-5.

Similarly, in TRW Automotive v. Magna Electronics, the Board granted Patent Owner’s Motion to Exclude for lack of authentication under FRE 901. See TRW Automotive U.S. LLC v. Magna Electronics Inc., IPR2014-01348 Paper 25 at 12 (PTAB January 15, 2016). Critically, in TRW Automotive, the exhibit in question was an alleged prior art publication relied upon in the petitioner’s unpatentability grounds as an essential piece of prior art. The Board found that there was no specific proof that the reference had been published on any particular date. Moreover, the petitioner failed to supplement its evidence in response to a timely objection by the patent owner. The Board reasoned that the exhibit in question was not self-authenticating and the Petitioner had not provided sufficient evidence of authenticity of the exhibit for admissibility. See id. at 9 – 10. Notably, the petitioner attempted to supplement its authentication of the exhibit in its reply, but the Board found that maneuver procedurally improper, and excluded the evidence for lack of authentication.

Our survey of the PTAB’s rulings on motions to exclude confirms that evidence is rarely excluded from post grant proceedings. However, excluding evidence is not impossible, and at least in some instances, exclusion can be case dispositive. Therefore, parties should certainly object to evidence whenever appropriate under the Federal Rules of Evidence and Board rules. Additionally, we observed that several of the instances in which the Board excluded evidence likely could have been avoided if the proponent had simply provided supplementary evidence. Therefore, an important take away from our review is that proponents of objected-to evidence should timely supplement the record to attempt to obviate the objection.

[i] In reality, there are only four unique instances of granted motions since 2015 because in several cases, the Board used its discretion to file a single opinion for multiple cases.

Mr. Desai is an associate in the firm's Litigation and Electronics Groups and specializes in patent litigation.  He has been involved in various district and appellate court litigation matters across a wide range of technologies.  He has experience in motions and trial practice as well as discovery, claim construction, expert witness preparation, pre-filing investigations and overall trial strategy.  Mr. Desai also has experience counseling clients on intellectual property strategy, including patent portfolio analysis, non-...