The EU General Court has rejected a trade mark application which featured the word ‘Cannabis’ together with images of cannabis leaves as it was contrary to public policy.

In 2016, Ms Santa Conte filed a EU trade mark application for a figurative sign (shown below) comprising of the words ‘Cannabis Store Amsterdam’, together with pictures of cannabis leaves, claiming food and drink items and catering services. 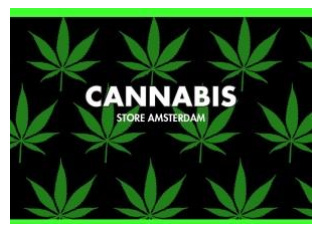 The EUIPO initially rejected the trade mark application as it was contrary to public policy. In appealing the EUIPO’s initial decision, Ms Conte argued that the public would perceive that the mark was concerning the legal use of cannabis in its form as hemp fibre (which is legal in the EU provided the hemp fibres have low levels of tetrahydrocannabinol (THC)).

Before the General Court Ms Conte argued that the word “Amsterdam” in the sign refers to the origin of the cannabis used in her products and the mark would be seen as referring to the “lifestyle and atmosphere characterizing the city of Amsterdam”. The General Court disagreed and believed the relevant public’s first perception when its sees the words “Amsterdam” and “Cannabis” together would be association with a city that has adopted legislation permitting use of the narcotic substance. This was even more likely to be the case when the sign is seen in conjunction with the images in the trade mark that are the conventional media symbol for marijuana.

Ms Conte also argued that the relevant public for this mark is those who are between 20 and 30 years old and are aware of the available information regarding cannabis. The General Court referred Conte back to her original application for goods and services intended for the public with no distinction on age. The General Court could not recognise any valid reason to limit the relevant public to those between 20 and 30.

The General Court also considered the relevant public policy arguments. In particular, that although many Member States are contemplating the benefits of the therapeutic and even recreational purposes of cannabis, in its current state the law does not permit the consumption and use of cannabis above the stated threshold. Moreover, the Treaty on the Functioning of the European Union states that the EU is to work in unison with Member States to reduce drugs-related health damage both in terms of prevention and in the provision of information.

It was therefore determined that combating the spread of the narcotic strands derived from cannabis meets a public health objective aimed at combating the harmful effects of that substance. The use of a trade mark that would be perceived by the relevant public as indicative that the items covered by the trade mark would contain narcotic substances, that are illegal, is sufficient to conclude that it is contrary to public policy.

In its concluding remarks, the General Court determined that since one of the primary purposes of a trade mark consists of identifying the commercial origin of goods or services, and a trade mark is important for consumers when deciding whether to purchase a product. The court believed that at present the trade mark as it will be perceived by the relevant public would encourage, implicitly, the purchase of the narcotic goods and services or at the very least trivialise their consumption.

The case highlights what is expected to become a recurring tension in the EU (both in IP and all areas of law) as businesses look to profit from the reduced regulation concerning cannabis in some Member States for specific uses, whilst there are still strict prohibitions in other Member States.
Furthermore, with certain Member States including the UK, France and Switzerland permitting medicinal use cannabis and certain cannabis companies looking to go public in 2020 the future of the regulation and commercialisation of cannabis is certainly an interesting space to watch.

Niall Lavery is a trainee solicitor in the firm’s London office.