On September 29, 2017, the Illinois Power Agency (IPA) released its Long-Term Renewable Resources Procurement Plan (Plan) to implement renewable energy goals set forth in Illinois’s Future Energy Jobs Act, which went into effect on June 1. Together, the new legislation and the Plan, among other things, make significant modifications to Illinois’s renewable portfolio standard (RPS) goal of 25 percent of retail electricity sales sourced from renewable energy by 2025. The Plan sets forth procurement programs designed to meet the state’s annual RPS targets until 2030 and will be updated at least every two years. These changes significantly expand renewable energy development opportunities in Illinois—by some estimates, leading to the addition of approximately 1,300 megawatts (MW) of new wind and nearly 3,000 MW of new solar capacity by 2030.

While maintaining the same 25 percent renewable energy sourcing goal, the Future Energy Jobs Act functionally increases the state’s RPS target because Illinois’s RPS standard previously applied only to customers buying power through a utility’s default service, not customers taking supply through alternative retail suppliers or through hourly pricing. According to the IPA, in recent years, only 30-50 percent of potentially eligible retail customer load actually received default supply services, while competitive class customers (including larger commercial and industrial customers, which represent approximately half of total load) had no default supply option. Given this transition, meeting Illinois’s RPS goal of 13 percent of retail electric sales in the state sourced from renewable energy for the 2017–2018 delivery year will require the IPA to procure on behalf of the state’s electric utilities an additional 7.5 million renewable energy credits (RECs), which will gradually increase to a forecasted procurement of 31.5 million RECs for the 2030–2031 delivery year. One REC represents 1 megawatt hour (MWh) of generation produced by an “eligible renewable resource.” Eligible resources include wind, solar, thermal energy, biodiesel, anaerobic digestion, biomass, tree waste, landfill gas and some hydropower. Many other states, including California and Massachusetts, utilize RECs to demonstrate compliance with the state’s RPS program.

New distributed generation and community solar projects will be procured using the Adjustable Block Program. This program sets an administratively determined price, adjusted in volumetric blocks, where a party seeking a REC contract knows the REC price in advance and has visibility into when and how that price may change. The block program’s procurement of RECs is allocated by statute as 25 percent for distributed generation projects with a nameplate capacity of 10 kilowatts (kW) or less (e.g., residential solar), 25 percent for distributed generation projects with a nameplate capacity between 10 and 2,000 kW (e.g., residential and commercial-scale solar), 25 percent for community solar projects, and 25 percent left to the IPA’s discretion, currently proposed to be allocated evenly between the three former categories. The blocks within the Adjustable Block Program are also divided by utility service territory.

When a block’s capacity is filled, the next block will open at a new price, expected to be 4 percent less than the previous block. A solar project will receive the price of the block that is open at the time the project’s application is submitted. The IPA’s initial calculations of REC prices under the Adjustable Block Program are as follows: 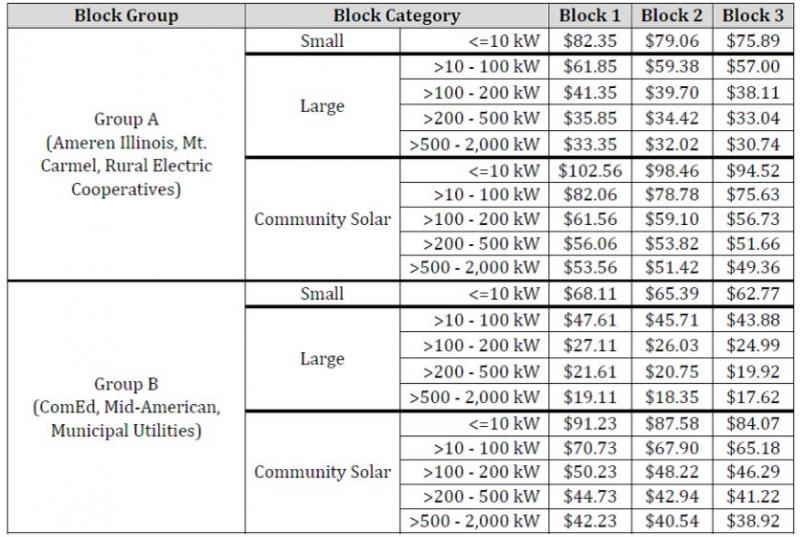 The IPA warns that these initial prices are likely to change in the final version of its Plan. The IPA also has the authority to periodically review the amount of generation capacity available in each block and the purchase price for each block. The IPA estimates that meeting its 2020 delivery year goals will require approximately 666 MW of new solar generation capacity under the block program, which will be divided evenly among the blocks, according to the current proposal.

Contracts entered into through the Adjustable Block Program must be for a minimum of 15 years of REC deliveries. Payment for RECs will be made by the applicable electric utility, and the seller will deliver RECs to that utility. For distributed generation systems below 10 kW, the REC purchase price will be prepaid in full by the contracting utility when the facility is interconnected and energized. For larger distributed generation systems and community solar projects, 20 percent of the REC purchase price will be paid up front, and the remaining portion will be paid over the following four years.

The IPA will conduct subsequent forward procurements seeking 15-year fixed price REC sales contracts. It will also use spot procurements to purchase RECs using single year contracts. Similar to past practices, the IPA will conduct competitive procurements based on price offers and locational priorities. The Future Energy Jobs Act, however, requires competitively procured RECs to meet certain public interest criteria that make it more difficult for generation resources located outside of Illinois to participate. The new legislation effectively eliminates the possibility that projects in states beyond those adjacent to Illinois could participate in Illinois’s RPS program.

The Plan also includes the Illinois Solar for All Program, which provides incentives for low-income participation in solar projects, either as the system owner, a community solar subscriber or as a system host.

The comment period on the IPA’s Plan ends November 13th. The IPA then has until December 4th to revise the Plan and file it with the Illinois Commerce Commission (ICC) for approval. The ICC must approve or modify the Plan by April 3, 2018, at which point the programs will be put fully into effect. If the current Plan is put into effect, Illinois stands to add a significant amount of renewable generation in the upcoming years.

Joel represents tax equity investors, borrowers, lenders and arrangers in the financing of complex energy and infrastructure projects, domestically and internationally, and in the structuring and negotiation of various secured and unsecured loan facilities and tax equity investment structures.