Landmark changes in the federal income tax treatment of partnerships (including multi-member LLCs) became effective in 2018 for many more partnerships than first anticipated. As a result of the Bipartisan Budget Act of 2015, the IRS can now audit certain “large” partnerships, instead of each of their partners, and assess income tax, interest and penalties against the partnership itself. IRS partnership audits have begun, and a group of “super auditors” are completing their training. We also learned from IRS officials that a surprising number of not-so-large partnerships didn’t exercise their annual right to opt-out of the comprehensive partnership audit regime (CPAR) and are therefore subject to the new audit rules – whether they like it or not.

The laws of most states don’t allow for the direct assessment of partnerships because these entities are not considered taxpayers under state law; they are pass-throughs with the tax liability resting at the owner level. With the CPAR, states now have a choice: (1) enact legislation that allows them to separately audit and assess certain partnerships; (2) substantially conform with the new federal CPAR and simply wait for the IRS to provide revenue agent report (RAR) information about recent audits of partnerships with connections to that state; or (3) do nothing and let what could be substantial amounts of state tax revenue go uncollected.

Because of concerns by professional and business trade associations that their partnership clients/members might be subjected to multiple state audits, as well as a comprehensive IRS audit, a number of these groups agreed to negotiate a model statute that could be enacted by every state that levies a net income tax. Representatives of the Multistate Tax Commission (MTC), in conjunction with the AICPA, the Council on State Taxation (COST), the ABA Tax Section*, the Tax Executives Institute, the Institute for Professionals in Taxation, and other groups, met for approximately two years to develop this model. The MTC Model Statute was approved by the MTC in January 2019 and soon endorsed by each of the other organizations. Thankfully, the gist of the model statute endorses the second option, allowing only the IRS to conduct partnership audits and then passing along the audit information to the states to proceed with their own assessments. So far 21 states have enacted all or large portions of the Model Statute (although at least three need revisions to more closely follow the MTC Model Statute). 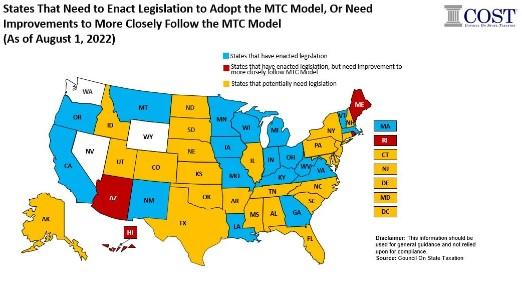 Critically, the Model Statute addresses reporting federal audit changes for all taxpayers – not just partnerships – although several states have enacted a version that’s limited only to partnerships. The model is designed to provide states with a uniform, simplified method to apply the results of IRS partnership audits, which may increase substantially with the hiring of more revenue agents as a result of the Inflation Reduction Act of 2022. On the other hand, the Model Statute gives taxpayers and their partnership representatives certain state-level elections that may vary from their federal election. A good example would be electing for federal tax purposes to “push out” the liability for the assessment to those who were partners during the audit period, while electing on a state-by-state basis whether to have the partnership itself pay the apportioned amount of the assessment.

The Alabama Department of Revenue (ADOR) has been working with the Alabama State Bar Tax Section to draft its own version of the Model Statute, but the project was shelved over a year ago. However, the ADOR indicated recently that it intends to restart the project, in cooperation with the State Bar Tax Section, and hopefully the Alabama Society of CPAs, and fine-tune its draft for possible introduction in the Spring 2023 legislative session.

With the expected increase in IRS partnership audits, especially with President Biden’s approval of the Inflation Reduction Act of 2022 and a near majority of the states with individual income taxes now having enacted all or substantial portions of the Model Statute, we expect several more states – including Alabama – to consider the idea in their next legislative session. Now is also the time for all partnerships (including multi-member LLCs) to have their tax advisers review their organizational documents and make the necessary changes to conform with the CPAR and corollary state laws.

Bruce Ely’s more than 35 years of experience have allowed him to handle projects as diverse as serving on the recruiting teams that successfully induced both Mercedes-Benz and Hyundai to locate their first U.S. manufacturing plants in Alabama to representing taxpayers before the Internal Revenue Service, the Alabama Department of Revenue and local taxing authorities. His practice focuses on three concentric areas: representing taxpayers in federal, state and local administrative and judicial forums; advising companies on choosing the proper form of entity through which...

Will Thistle practices primarily in the areas of federal and state and local taxation. He regularly counsels public and private businesses on Alabama tax matters, with particular emphasis in the areas of sales, use, and property taxes.

A significant portion of Will's practice is dedicated to the representation of taxpayers in all phases of federal, state, and local tax controversy, including audit assistance, administrative hearings, and litigation. Other areas of his practice include advising clients with regard to business license obligations...