In the US domestic upstream oil and gas market, 2021 has been all about consolidation and exploration and production (E&P) companies focusing on disciplined growth and asset optimization. In an effort to win back the confidence of public and capital markets, many E&P companies have recalibrated their strategies and focus toward maximizing the value of existing assets by deploying maintenance capital to drill wells on existing leases and relying less on acquiring new prospects and chasing growth just for growth’s sake. All of this is aimed at establishing a consistent, stable-free cash flow that can be returned to investors and recouping some of the financial losses borne by those investors over the tumultuous past decade.

The wavering confidence in the E&P sector from public and capital markets has cascaded across the oil and gas value chain, affecting midstream as well. As a result, midstream businesses are also facing pressure from their own financial backers and investors to minimize additional capital expenditures and maximize cash flow. For the midstream companies that build the gathering, separating, transportation, storage and processing infrastructure to service the volumes of oil, gas and water that E&P companies produce, this check on E&P growth means that the midstream sector must adapt its own growth plans and strategies as well. If E&P companies are not spudding as many new wells and developing as many new drilling locations, then there is not as great of a need for the build out of midstream infrastructure to service production-related volumes. Additionally, existing pipelines, processing facilities, compressors and storage units may be facing capacity constraints as producers aim to maintain or increase production from existing wells or drill additional wells in their current production areas instead of focusing on production growth from newly acquired and developed properties.

One upshot of this more disciplined oil and gas environment is that it has created some strange bedfellows. Some midstream companies, who typically compete with one another for E&P customers, are working together. This cooperation manifests itself through creative commercial arrangements, contracts or joint ventures to utilize the midstream companies’ collective existing infrastructure to maximize overall throughput and related service fees and minimize any additional capital spend. We outlined some of the strategies we’ve seen below, along with relevant advantages and complications to consider.

Under a capacity trade, each party leases a specified amount of capacity on the other party’s existing pipelines to service the wells in the part of Production County where their customers have wells, but the pipeline lessees don’t have pipelines. Both NHM and SHM can “gather,” virtually through the capacity trade, a greater amount of production volumes without having to undertake the additional capital expenditure to install their own pipelines to service those volumes. This arrangement works well when a true trade is at play because each party benefits from, and is burdened by, the capacity lease arrangements. This results in ample incentive for NHM and SHM to work together and develop trust in one another. 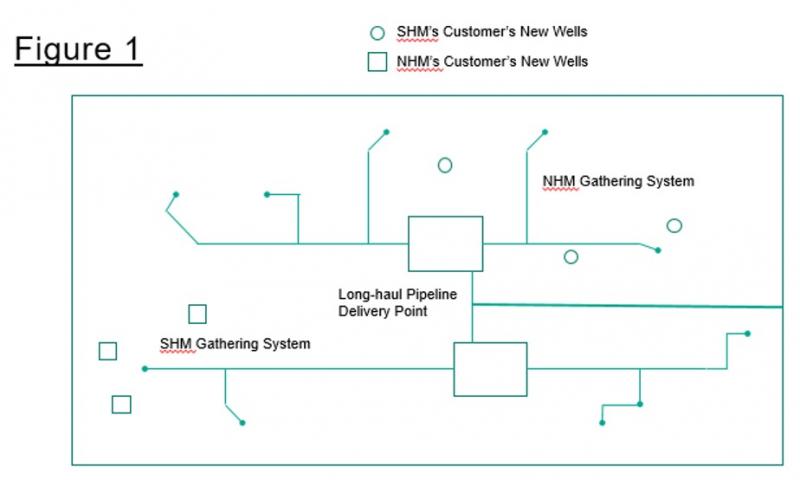 In both arrangements—the capacity trade and the pipe-within-a-pipe—there are drawbacks to consider. From an operational perspective, the pipeline lessee is now placing the customer’s product in the custody and care of another service provider. They will need to get comfortable (and seek contractual protection and indemnification) that the other service provider will maintain the appropriate levels of operational integrity, commitment to safety and dedication to excellence that customers expect and are paying for. From a financial perspective, the nature of these arrangements is to forego the potential upside from the prospect of new customer contracts with higher rates in exchange for a “sure thing” at a percentage of the pipeline lessee’s fees. The contracted for leased capacity may also limit the pipeline lessee’s long-term growth prospects if they have the opportunity to sign up more production than they have leased capacity for.

In rare occasions, production from the same producer in a particular area is dedicated to two different midstream companies (a dual-dedication). Putting aside how a dual-dedication can come into play, let’s assume the resulting effect in this scenario, under the gathering agreements in place, is that the two midstream companies, UpperCon Gathering (UCG) and LowerCon Gathering (LCG), find themselves competing with one another to respond to connection requests from their producer, MultiCon Production (MC Production), and to offer the most competitive gathering rates in connection with MC Production’s requests. UCG and LCG quickly realize that the financial ramifications of this competition, and the lack of foresight and direction with respect to requirements to build out pipeline infrastructure, will be disastrous for each of them. Instead of competing, UCG and LCG create an arrangement where UCG agrees to respond to all connection requests on the First County side of the dedication, and LCG agrees to respond to all connection requests on the Second County side of the dedication (See: Figure 2 below). If a substantial majority of the connection requests are in one county and not the other, UCG or LCG, as applicable, will make a pre-agreed true up payment at the end of the year. 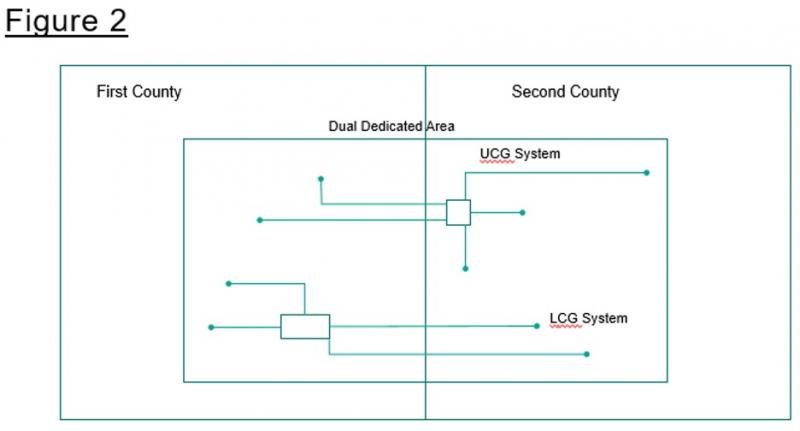 This type of arrangement is not without complexity and potential pitfalls. One key issue to consider for UCG and LCG is damaging relations with MC Production should it become aware of UCG and LCG’s arrangement (which it will). There could also be issues between UCG and LCG around application of the true up payment and the ability to audit the other party’s books related to the volumes and revenues from the new connections. While this example may not solve all dual-dedication issues, it is illustrative of the trend for midstream competitors to work together to find a mutually beneficial arrangement and the creativity with which those arrangements are implemented. 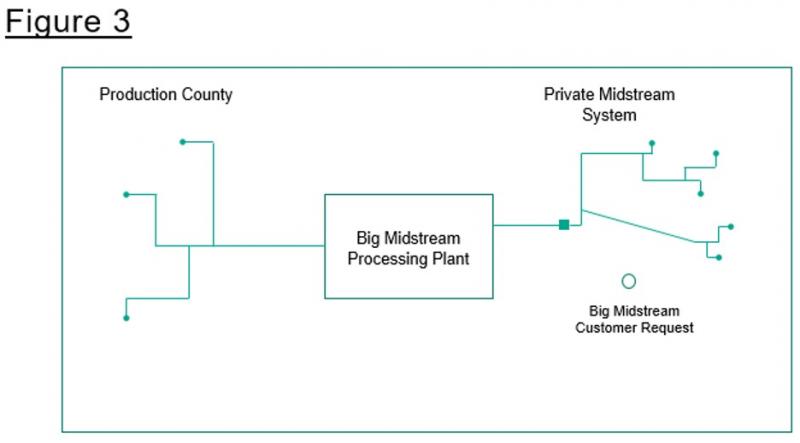 This final scenario is one we have only seen on white boards and investment banking presentations so far but may come to fruition soon. A large, publicly traded integrated oil company, Big Oil and Gas Co. (BOGC), has an operating position spanning multiple counties (Production County, Development County and Exploration County), in a particular basin. BOGC also has its own gathering infrastructure for the eastern half of Production County but not the western half. BOGC has a mandate to focus on maintenance capital expenditures and has approved drilling plans to spud wells in the western half of Production County in the next 12 months (and must do so in order to maintain its leases there). 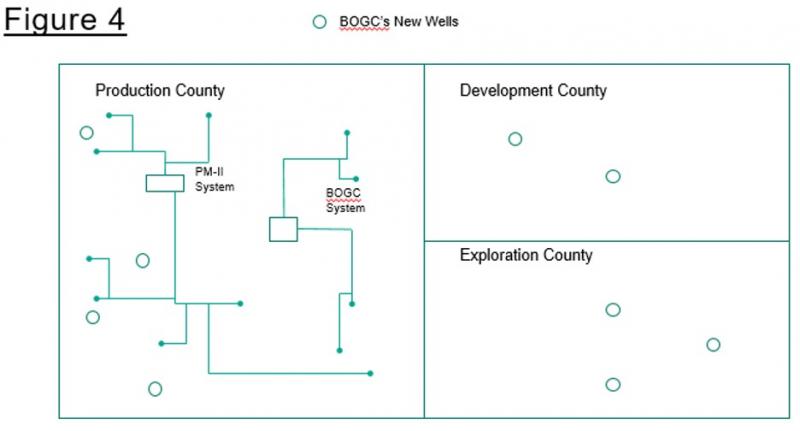 This allows BOGC to indirectly share the burden of building out new gathering infrastructure for its production from the western half of Production County and set itself up to monetize that gathering infrastructure down the road through a sale or initial public offering of Western Basin Gathering LLC. However, separating out those gathering assets and the related financials may be difficult, as well as giving up a significant amount of operating control over those midstream assets.

In all of the midstream-to-midstream agreement examples described in this article, it is imperative that midstream companies review and understand the terms and conditions of their commercial agreements with their upstream customers and to be sure not to run afoul of those agreements. In some instances, that may require a measured determination as to whether the midstream‑to‑midstream arrangement constitutes an assignment for which an upstream customer’s consent is required or is effectively nothing more than a permitted subcontractor agreement. Maintaining good relations with upstream customers and not breaching commercial agreements with those customers should be a key part of the calculus involved in considering whether or not to enter into any such midstream-to-midstream agreement.

While the examples above are by no means exhaustive, we’ve highlighted some of the benefits and issues around commercial arrangements that we have documented, worked on and conferred with E&P and midstream clients seeking to optimize existing infrastructure to generate increased levels of throughput and revenue. We look forward to continuing to counsel clients on innovative legal structures and agreements in the E&P and midstream industries to help them achieve the highest levels of commercial success.

Parker A. Lee advises companies and investors in evaluating and executing transactions and commercial contracts in the energy and infrastructure industries. He represents clients in various domestic and international oil & gas, power, water, petrochemical and infrastructure M&A, project development and joint venture transactions.

Jibin represents clients in the acquisition and sale of energy, manufacturing, technology and service-related companies, and negotiating and securing...