The Legality of Loot Boxes: A Primer

What is a Loot Box?

Loot boxes are virtual items that may be redeemed to receive a randomized selection of additional virtual items. In some instances, they are free. In others, loot boxes can be a lucrative monetization mechanic. These random sets of virtual items can range from aesthetic items, which make something in the game look good (e.g., a visual customization for a player’s avatar or weapons), to functional items that improve in-game performance (e.g., weapons, power-ups, powers, etc.). Loot boxes can be “accessed” in a variety of ways, such as by earning access via game play or purchasing a “key” using virtual currency or real money to unlock the loot box.

With the proliferation of loot boxes over the past 15 years, the use of them in games has received increased attention from legislators, regulators and the plaintiffs’ bar. The primary legal issue is whether a loot box mechanic constitutes gambling. Other issues include whether the age rating of games with loot box mechanics should be impacted based on the inclusion of the game mechanic, and whether consumer protection laws require disclosure of the odds of obtaining certain virtual items through loot boxes. Some of these key issues are discussed below.

Gambling. There is a great debate about whether loot boxes constitute gambling. The gambling laws vary by country, and in the United States, by state as well. In the US, few if any laws specifically address gambling based on virtual items. At a high-level, an overly simplified definition of gambling involves: staking something of value (consideration) for a chance to win something of value (a prize). If all three elements are present in an activity (prize, chance, and consideration), it may be gambling.

Impact on Children. Content ratings typically indicate the appropriate age group for and type of content included in a video game. Some advocate that even if loot box mechanics are not gambling, they have an addictive effect and therefore this should be reflected in the games rating. Some commenters have suggested modifying the ESRB rating for games with loot boxes, for example by rating all such games as Mature or Adult Only, or by creating a new rating.

• In-Game Purchase Disclosures. In April 2020, the ESRB announced a new “Interactive Element”—used to describe disclosures for video games that highlight a game’s interactive or online features that may be of interest but do not influence a game’s rating. The “In-Game Purchases (Includes Random Items)” disclosure sits just below a game’s content rating assigned to any game that contains in-game offers to purchase digital goods or premiums with real world currency (or with virtual coins or other forms of in-game currency that can be purchased with real world currency) for which the player doesn’t know prior to purchase the specific digital goods or premiums they will be receiving (e.g., loot boxes, item packs, mystery awards).

• Content Creator Disclosures. With the rise of avid video game players livestreaming gameplay to followers, these players are reminded of the need to follow FTC Endorsement Guidelines. These guidelines require, among other things, disclosure of any material connections between the players and the products they are touting, such as compensation agreements.

The legality of loot boxes may be challenged through a variety of paths. For example, state attorneys general may bring criminal or civil actions, or aggrieved consumers may bring challenges directly under most states’ anti-gambling laws. Even if loot boxes are presumptively legal and do not constitute gambling under applicable law, consumers may bring lawsuits based on consumer protection or false advertising laws if they believe that the loot boxes are promoted in an arguably misleading way.

Several class action lawsuits have been brought recently in California against game developers, game publishers, and distributors of games. While some of the lawsuits have alleged violations of unfair competition laws by engaging in an “unlawful” business under the states’ gambling law, other cases claimed that the defendant misrepresented its marketing and selling of the loot box. We discussed one of those lawsuits in this post.

Various federal, state, and foreign officials, have proposed regulating loot boxes. In 2018, state legislatures in at least four states (California, Hawaii, Minnesota, and Washington) introduced bills aimed at regulating loot box sales. All failed to pass. At the federal level, the most notable effort to restrict loot boxes was “The Protecting Children from Abusive Games Act,” a 2019 bill introduced by Sen. Josh Hawley aimed at prohibiting loot boxes in any game played by minors (which we covered here). In August 2020, the FTC released a staff perspective paper in response to the workshop held a year prior in 2019 about loot boxes and microtransactions. The FTC paper summarizes key concerns from panelists and commenters about how loot boxes function, as well as recommendations to address the concerns.

There is no consistent approach internationally either, although many EU member states have released position papers within the last few years. 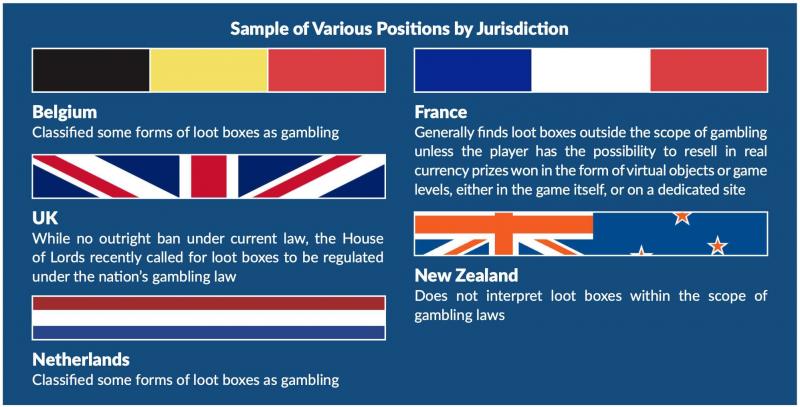 The ‘Top-up’ (Bank) Guarantee in a Dutch Scheme – For as Long as It Lasts…
By
Greenberg Traurig, LLP
“Help Me Get My Feet Back on the Ground”: IRS and Treasury Issue Initial Guidance...
By
ArentFox Schiff LLP
Tax Court Holds That Deficiency Petition 90-Day Time Limit Is Jurisdictional
By
McDermott Will & Emery
ESG Opportunities for Distressed Real Estate
By
Greenberg Traurig, LLP
FDA Webinar on Food Traceability Rule
By
Keller and Heckman LLP
Celebrating E-Discovery Day: E-Discovery Exchange with Ellen Blanchard [VIDEO]
By
K&L Gates
Advertisement

Julia Kadish is an attorney in the Intellectual Property Practice Group in the firm's Chicago office.