Although the focus of this blog is civil litigation, I read an interesting story in the Roanoke Times about mandatory minimum sentencing in the Western District of Virginia.  In a recent speech to the American Bar Association, Attorney General Eric Holder announced that he was directing US Attorneys to change the way they charged certain non-violent, low-level drug offenses in order not to trigger the "draconian" mandatory minimum sentences.

According to Timothy Heaphy, the US Attorney for the WDVa, no major change is needed for the Western District of Virginia because drug offenders are not being subject to the harsh measures that concerned Attorney General Holder.  For the most part, Heaphy said that he has already been operating as Holder requested, stating: "This is an evolutionary step, not a new thing for us."  The Roanoke Times also quotes Chief Judge Glen Conrad as saying "This United States Attorney's Office has been fair in the way it charges individuals." 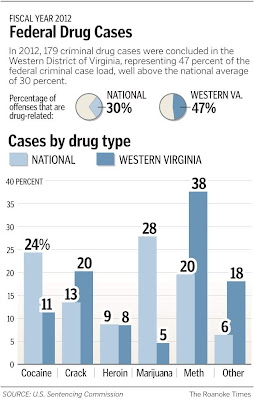 The article contained some interesting statistics that appear to show that, as a percentage, there are more criminal drug cases in the Western District of Virginia than the national average.  And that the average drug-related sentence (91 months) was higher in the WDVa than the national average (72 months).  Heaphy explained that this was because he has focused on major drug cases: "We probably more than some places around the country have already changed our approach to drug charging... We have pivoted toward charging only folks that are more sophisticated," with the rest being charged in state courts.

When drug cases are broken down by drug type, the statistics show that there are fewer marijuana and cocaine cases in WDVa than in the rest of the country, but more meth and "other" cases.  I suspect a good portion of the "other" category is Oxycontin, given the history of that drug's abuse in Southwest Virginia.  In 2011, the kingpin of a multi-state OxyContin distribution ring was convicted and sentenced to 10 years imprisonment in the Western District of Virginia.

Heaphy said that he plans to further tighten charging and sentencing practices, by bringing charges that would impose mandatory minimums only in cases in which there are certain aggravating circumstances.  One interesting statistic that was not available in the article is the percentage of cases in which defendants were subject to mandatory minimums in the Western District of Virginia as compared to the national average.