Have you ever wondered when Massachusetts’ 6-year statute of repose for defective design, planning and construction is triggered when dealing with the construction of a multi-building, multi-year condominium construction project?

If you haven’t thought about such an issue that’s okay, neither had the United States District Court for the District of Massachusetts, nor the Supreme Judicial Court of Massachusetts. However, luckily for us, the Supreme Judicial Court recently tackled this very question in D’Allessandro v. Lennar Hingham Holdings, LLC, 156 N.E.3d 197, 198 (Mass. 2020).

In D’Allessandro, the Hewitts Landing Condominium project (the “Project”) consisted of 150 condominium units and twenty-eight buildings. D’Allessandro, 156 N.E.3d at 199.  The Project was built over the course of twenty four different phases between 2008 and 2015; however, as individual units were completed, the Project’s architect “submitted affidavits to the town of Hingham, swearing that individual units or buildings were ‘substantially complete’ and ready for occupancy, and the town issued certificates of occupancy for the individual units or buildings.” Id.

Subsequently, in 2017, the Project’s trustees filed a complaint seeking damages from the developer, the contractor, and the construction manager, along with others entities (collectively “defendants”), alleging design and construction defects to the common and limited common areas of the Project. Id. at 200.  Specifically, the trustees claimed that four general areas were defective: “decks and columns,” “roofing/flashing,” “exterior walls/flashing/building envelope,” and the “irrigation system.” Id.

In response, the defendants sought summary judgment, asserting that the trustee’s claims were “partially barred by the six-year statute of repose set forth in [Mass. Gen. Laws] ch. 260 § 2B. Id.  Section 2B provides that no tort action shall be brought “arising out of any deficiency or neglect in the design, planning, construction or general administration of an improvement to real property” more than six years after “(1) the opening of the improvement to use; or (2) substantial completion of the improvement and the taking of possession for occupancy by the owner,” whichever date occurs earlier. Id. (quoting Mass. Gen. Laws ch.260 § 2B).

The developer reasoned that, because six of the twenty-eight buildings had been substantially completed more than six years ago, § 2B barred all claims with regard to those buildings. Id.  The District Court judge denied the defendants motion, but then certified the following question to the Supreme Judicial Court:

Where the factual record supports the conclusion that a builder or developer was engaged in the continuous construction of a single condominium development comprising multiple buildings or phases, when does the six-year period for an action of tort relating to the construction of the condominium’s common or limited common elements start to run?” Id. at 198.

The Supreme Judicial Court dove right in and focused on the work “improvement.” Id. at 201.  The Court stated that it was “undisputed” that the Project and its component parts was captured by § 2B as it constituted “the design, planning, construction or general administration of an improvement to real property.” Id.  The more complex question for the Court was whether the statute of repose was triggered only once (when the entire condominium was open to use, or substantially completed), or “whether the statute was triggered multiple times, as each individual building was open to use or substantially completed?” Id.

Relying on prior precedent, the Court stated that the legislative intent behind § 2B “was to limit the liability of architects, engineers, contractors, and others involved in the design, planning, construction, or general administration of an improvement to real property.” Id. at 202.  Additionally, the Court noted that the six-year limitation was a “reasonable balance between the public’s right to a remedy and the need to place an outer limit on the tort liability of those involved in construction.” Id.

Accordingly, the Court answered the certified question as follows: “[w]here a condominium development is comprised of multiple buildings, regardless of how many phases of the development there may be or how many buildings are within each phase, each building constitutes a discrete ‘improvement’ for purposes of [Mass. Gen. Laws ch. 260] § 2B, such that the opening of each individual building to its intended use, or the substantial completion of the individual building and the taking of possession of occupancy by the owner or owners, triggers the statute of repose.” Id. at 203-04.

So, what this means for design professionals, developers, contractors, and the like, is that the next time you start a complex condominium project with multiple buildings and phases, you are protected from liability six-years after each individual building either (1) opens for its intended use, or (2) is substantially completed and an owner takes possession or occupancy.  Gone are the days, in Massachusetts anyways, where you have to wait six years after substantial completion of the entire project. 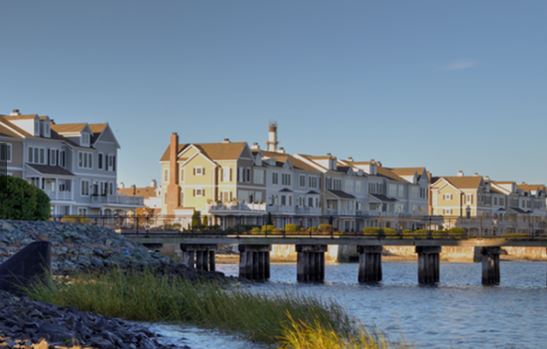 Photo from the Hewitts Landing Condominium website, found at https://www.livehewittslanding.com/hingham/hewitts-landing/photos/

David Fitzpatrick is an associate in Pierce Atwood’s Litigation and Construction Practice Groups. Prior to joining Pierce Atwood, David clerked for Justices Gilbert V. Indeglia and William P. Robinson III at the Rhode Island Supreme Court, where he conducted extensive legal research and drafted opinions on criminal and civil cases.

David was also a legal intern at a Rhode Island law firm where he assisted with the production of court documents, outlined questions for upcoming depositions, and observed various proceedings in Rhode Island Superior Court.

In addition to litigation, arbitration, and mediation, Tom counsels clients...