All but one of Mexico’s 32 states have been cleared by the federal government to open for business and social affairs without restrictions under the nation’s COVID-19 traffic light monitoring system—the largest number of states in green-light status since the system was implemented in June 2020.

The only state operating with federally designated restrictions is Baja California, which is in orange status, where the government ranked it in the report for November 1–14, 2021. In order to curb the spread of COVID-19, states in orange status restrict the number of workers allowed on-site to half the normal capacity.

The four-tiered monitoring system, which is updated every other week, is used to alert residents to the epidemiological risks of COVID-19 and provide guidance on restrictions on certain activities in each of the country’s states. Below is a map for the period of November 15, 2021, through November 28, 2021, indicating the COVID-19 risk level in each of the states and the capital. 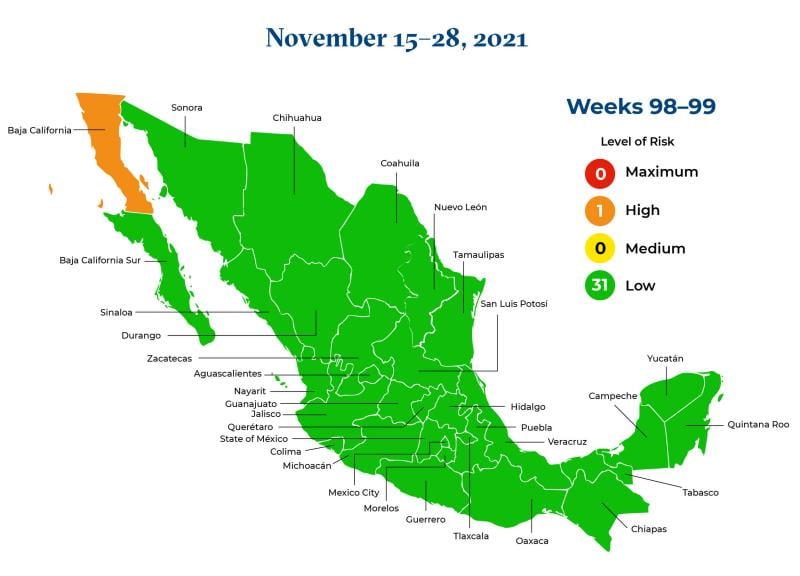 Vaccination rates are also climbing. As of November 9, 2021, 75,170,848 residents of Mexico at least 18 years old had been vaccinated, representing 84 percent of the nation’s population. The federal government has not clarified the number of people who have been fully vaccinated.

This chart presents the traffic light status of each state, and, as applicable, variations between federal and local traffic light statuses based on publications of the federal Ministry of Health and status reports provided by each state. A few of the states appear to be taking a more wary approach toward returning to the “new normal.” Puebla, for example, has designated five of its six regions in yellow status (medium risk), and is keeping Region 3, which includes the state’s capital city, in orange status. Veracruz has no areas in either red or orange status, but it has designated more than 50 municipalities in yellow status.

Pandemic conditions in the federal capital have continued to improve since late August 2021, when Mexico City was in orange status. The capital—in whose metropolitan area about 20 percent of the nation’s population lives—moved into green status in early November, and remains there, according to the Mexico City Monitoring Committee. But it appears that the committee is proceeding with caution, since it has not yet updated its guidelines for private corporate offices, indicating that maximum on-site capacity is limited to 80 percent of the workforce, in accordance with the industry-specific health protection guidelines. The guidelines also require employers to conduct at their own expense and on a weekly basis, rapid antigen tests or reverse transcription-polymerase chain reaction (RT-PCR) tests for the detection of the SARS-CoV-2 virus, to at least 20 percent of the personnel attending work on-site.

Finally, the Administrative Verification Institute, along with other Mexico City government authorities, will continue to visit businesses to verify compliance with the general and specific sanitary measures for workplace health protection. Employers that are deemed not to be compliant with the health and safety measures may be subject to the total or partial temporary suspension of work centers for up to 15 calendar days. Noncompliant employers may also be subject to other applicable sanctions.