Intervention Status: The government declined to intervene in this case.

Defendant’s Businesses: The defendant owns and operates laboratories in Texas and North Carolina and performs urine drug testing on specimens collected from patients across the United States.

Relator’s Relationship to Defendant: Ameritox submitted bills and claims for urine drug testing to Allstate. Allstate hired Dr. Spitz as an expert to participate in its investigation of Ameritox’s bills.

Summary of Case: Allstate, a property and casualty insurer, used Ameritox for urine drug testing. Allstate retained Dr. Spitz as an expert to review Ameritox’s bills to the insurer. The relators alleged that Ameritox engaged in a scheme to defraud the United States by submitting reimbursement claims for services that were not provided, not medically necessary, or both. Specifically, Ameritox purportedly 1) billed for quantitative urine drug testing that was not actually performed, 2) billed for confirmatory drug testing that was unnecessary and performed in violation of the standard of care applicable in the clinical laboratory community, 3) billed for duplicative and unnecessary urine drug screening, and 4) used fraudulent billing practices, including unbundling and billing multiple units of a “per patient encounter” billing code. According to the relators, Ameritox “exploited its superior knowledge of esoteric laboratory and billing practices and took advantage of [the government’s] lack of familiarity with the same” to carry out its allegedly fraudulent scheme. The relators further alleged, with supporting affidavits from former Ameritox employees, that Ameritox incentivized its employees to pressure physician clients to refer more samples and to refer patients with insurance more likely to pay Ameritox’s claims for testing, namely Medicare. The relators claimed that Ameritox paid kickbacks to physician clients in the form of free or discounted specimen cups, gift cards, cash payments, and placement of Ameritox employees in physicians’ offices free of charge, in exchange for, or to encourage, referrals. In addition, Ameritox supposedly required physicians to submit specimens for testing that was not medically necessary, by requiring that such physicians select a panel comprised of at least eight tests, even if one or more of those eight tests was not necessary.

Current Status: The relators voluntarily dismissed the action without prejudice on December 19, 2018. The government assented to the dismissal, stating that “the matter does not warrant the continued expenditure of government resources to pursue or monitor the action based on currently available information.”

Reasons to Watch: Although this case was dismissed, it highlights two potentially interesting trends. The first is the role of a large corporate insurance company serving as a FCA whistleblower. Private insurance company audits of providers offer the potential to uncover issues such as over-utilization, upcoding, or lack of medical necessity, all of which could potentially affect government payors and private payors alike. It is possible that private payors that discover such provider conduct could increasingly pursue FCA claims in addition to private remedies. Such was the case here, where Allstate filed its own complaint against Ameritox asserting direct claims under the Racketeer Influenced and Corrupt Organizations (“RICO”) statute, 18 U.S.C. §§ 1961-68. See Allstate Insurance Co. v. Ameritox Ltd., No. 1:16-cv-00939 (E.D.N.Y.). That claim was also dismissed voluntarily. Nonetheless, these cases against Ameritox demonstrate how private payors can open a multifront battle against a provider accused of false or fraudulent billing practices.

Also of interest here is the focus on billing practices related to drug testing for substance abuse-related issues. The growing effort to combat opioid abuse means that the amount spent on these kinds of services will continue to grow, so it is likely that an increasing number of cases will involve services to screen for and treat opioid abuse.

Intervention Status: The government intervened for purposes of settlement on August 22, 2018.

Relators: Relators originally proceeded anonymously as Jane and John Doe, but later were identified as Vicki Swartzell and Jim Vandermeer.

Relator’s Relationship to Defendant: The relators were sales representatives for Singulex.

Summary of Case: In May 2016, Singulex allegedly launched a scheme to defraud Medicare by increasing orders of purportedly medically unnecessary tests, which it called the “Medical Necessity Coding Project.” According to the relators, management redesigned Singulex’s test requisition forms by adding additional tests in a manner that purportedly manipulated diagnosis codes to maximize Medicaid reimbursement. Management allegedly pressured its sales employees to pressure physicians to order medically unnecessary testing, by directing the entire sales force to “instruct all providers to pick at least three” of the diagnosis codes available on the front page of the newly redesigned form. When physicians did not order certain diagnosis codes, Singulex sales representatives and phlebotomists purportedly checked off the omitted codes on the order forms. Relators alleged that this scheme resulted in an increase in Medicare reimbursements of “6,000-13,000%.”

Current Status: The United States intervened on August 22, 2018, and the complaint was unsealed that same day. On September 18, 2018, the parties entered into a Joint Stipulation of Voluntary Dismissal of the FCA claims, which the court entered on January 16, 2019. According to the government’s press release, the settlement calls for Singulex to pay $1.25 million. In agreeing to the settlement, Singulex disclaimed any wrongdoing or violation of the FCA. Relator Swartzell, however, continues to advance claims against Singulex for retaliation and nonpayment of wages.

Reasons to Watch: This case typifies the increasing focus in FCA cases on issues of medical necessity. In its intervention notice, the government specifically predicated its action on allegations that “Singulex knowingly pressured health care providers to select” diagnosis codes without regard to patients’ medical conditions or to order tests without regard to medical necessity. Although Singulex denies any wrongdoing, the government’s attention to this case demonstrates the willingness of the government to use the FCA as a tool to police over-utilization of federally reimbursed health care services, even where a case turns on issues like medical necessity that require evaluating physicians’ subjective medical judgments. Programs by laboratories that can be depicted as attempts to influence physician ordering practices will likely face close scrutiny.

Intervention Status: The government declined to intervene on October 1, 2018.

Relator’s Relationship to Defendant: The relator is a medical billing and compliance consultant who advised one of defendant’s contract physicians.

Summary of Case: According to the relator, Primus, the defendant, advertised its telemedicine services as a “turnkey” program. As part of the program, Primus directly identified a contract physician’s qualifying patients, contacted patients by telephone, provided telephonic patient monitoring services, and billed Medicare. The relator, a medical billing and compliance consultant, alleged that Primus defrauded Medicare because Primus did not comply with Medicare’s physician supervision requirements while providing its chronic care management and annual wellness visit services. Primus purportedly trained unqualified call center employees to keep chronic care management patients on the phone for the 20-minute minimum required to bill the service to Medicare, regardless of whether a 20-minute call was required based on the patient’s specific medical condition. The relator further alleged that Primus staff conducted wellness visits without the legally required physician supervision and incentivized marketing agent contractors through a volume-based payment program that increased the chance of Medicare fraud.

Current Status: Relator entered a notice of voluntary dismissal on October 29, 2018. The case was dismissed without prejudice on November 7, 2018.

Current Status: Health care services are increasingly provided on a broad scale through telemedicine providers. As this case highlights, telemedicine providers will probably draw close scrutiny with respect to staff qualifications and physician supervision. The growing prevalence of these types of services makes it likely that claims like those advanced in this case will become more prevalent.

Relator’s Relationship to Defendants: Relator is the former chief financial officer for KRHS, an entity related to the defendants.

Summary of Case: The relator, John Mohatt, brought six claims against the defendants under federal and state False Claims Acts. Mohatt alleged that, in violation of the federal Stark Law, 42 U.S.C. § 1395nn(a)(1), and Anti-Kickback Statute (“AKS”), 42 U.S.C. § 1320a-7b(b), the defendants’ investment arrangement unlawfully incentivized participating physicians to refer patients to HealthCenter and overpaid five gynecological surgeons based on the value of their referrals. The Stark Law prohibits physicians from referring patients for laboratory or other designated health services to an entity with which they have a financial relationship, absent compliance with an available exception. In addition, the contested arrangements also purportedly resulted in payment of unlawful remuneration to the physicians in violation of the AKS.

As chief financial officer of KHRC, Mohatt claimed that he was in an advantageous position to observe and document these Stark law violations. Mohatt allegedly uncovered a scheme of secrecy around the identities of physician investors in HealthCenter and alleged that this scheme was maintained to avoid public controversy about the physicians’ conflicts of interest. These investor physicians purportedly both referred patients to HealthCenter and shared in revenues generated by these referrals. This failure to comply with the federal Stark Law allegedly resulted in the submission of thousands of false claims to federal and state health care programs.

On September 25, 2018, the case was consolidated with an earlier case brought by the same relator against two entities related to the defendants, KRMC and Kalispell Regional Medical Center.

Current Status: The United States intervened on September 25, 2018 for purposes of settlement. The parties in the consolidated cases settled for $24 million, which was the largest False Claims Act recovery in Montana history. The relator received $5.4 million as his share of the recovery. The case was dismissed with prejudice on September 26, 2018.

Reasons to Watch: This case illustrates the risks for hospitals and physicians in the structuring of ownership interests and compensation. Hospitals in rural and low-population areas can face particular challenges in recruiting and compensating physicians. Physician-owned facilities are common, but proper structuring of such arrangements must be done to avoid violations of the Stark Law. Here, the alleged failure to structure the physicians’ ownership interests in accordance with the requirements of the Stark Law supported the large settlement that the government obtained. As this case highlights, where physicians have ownership interests in hospitals or outpatient clinics to which referrals are made, proper structuring is critical to avoid Stark Law and AKS violations.

Mintz maintains a database of unsealed health care qui tam actions. This database enables us to follow and analyze trends in the cases that have been unsealed. The following are some trends in qui tam filings against health care-related entities in the 12 months that ended on January 31, 2019:

Where were cases filed? Although cases were unsealed in jurisdictions throughout the country, some interesting trends have emerged as to jurisdictions where the most cases have been unsealed:

Who brought the cases? The ranks of relators are beginning to diversify. 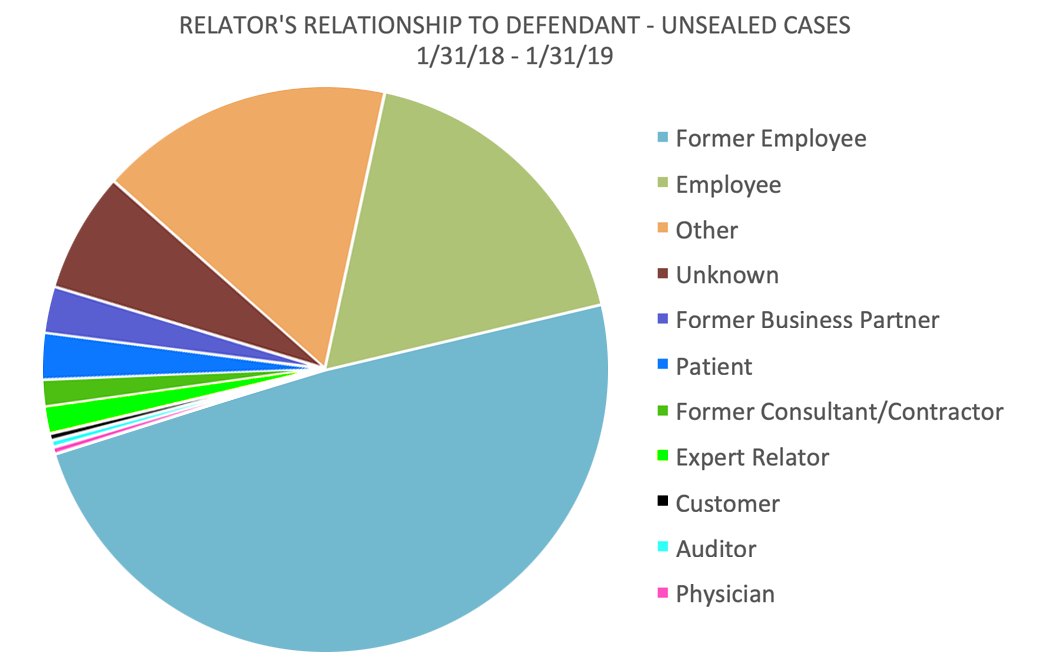 In the 12 months that ended January 31, 2019, current and former employees – mostly the latter – continued to dominate the ranks of relators, accounting for 67% of all cases. But significant numbers of relators are now found among customers, industry experts, business partners, consultants, and patients.

How frequently did the government intervene? 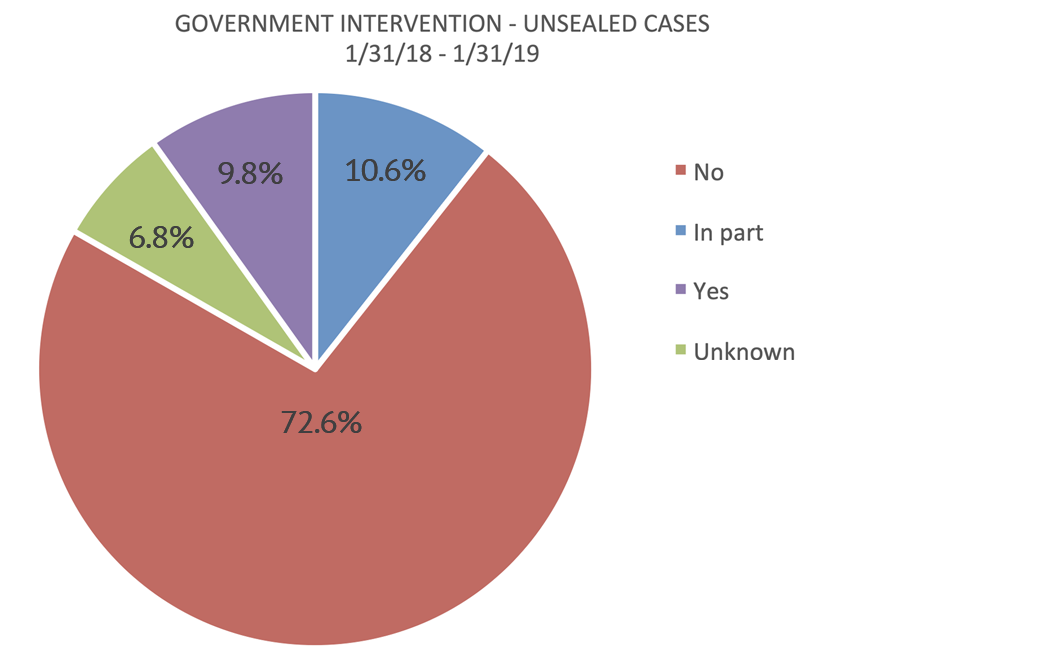 Intervention rates continue to be extremely low, with the government electing to intervene in only 20.4% of cases unsealed in the 12 months that ended January 31, 2019.

Hope has a national reputation as a health care enforcement defense lawyer and chairs the firm’s Health Care Enforcement Practice. She regularly defends health care companies in governmental investigations and ensuing cases, conducts internal investigations, and advises health care providers and manufacturers regarding enforcement issues. She has in-depth knowledge of laboratory regulations. Many of Hope’s engagements are the result of qui tam cases initiated by whistleblowers under federal and state false claims acts. She often works with companies to develop and implement policies and...

Randy is an esteemed trial lawyer who draws on his extensive courtroom experience to provide value to clients, often through negotiating efficient solutions for clients well short of trial. Randy has litigated and tried to jury verdict hundreds of cases in federal and state courts after nearly three decades as an Assistant US Attorney and US Navy Judge Advocate. Clients who need seasoned courtroom practitioners have asked Randy to take charge of cases shortly before trials. He represents executives and companies across many industries in complex commercial litigation, civil and criminal ...