New Versions of Iconic Designs – Can They Be Protected Under EU Design Law?

We all have memories associated with iconic (car) designs. It could be our grandparents’ car, the car we used to drive when we were younger or that cool model we could not afford as students. Car designs often become icons and reflect socio-economic status and, for this reason, the automotive industry often offers remakes of classic models, such as the new Fiat 500, the new Mini and, of course, the new Porsche 911.

What happens to the design protection for iconic cars when they form part of a new released model? These are the issues that were tested by Porsche in two recent cases decided by the EU General Court (decisions T-209/18 and T-210/18). The key question from an IP perspective was whether a design incorporating a remake has the requisite novelty and individual character and, thus, should be deemed valid.

The prior German designs and the RCDs filed by Porsche are set out below: 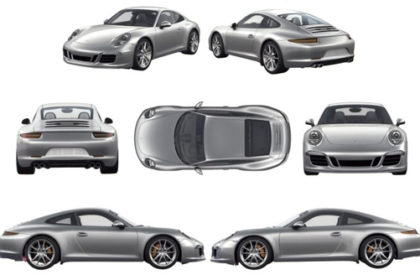 Porsche argued that the Porsche 911 is such an iconic car that the informed user would pay a high level of attention to the details of the new model, and the freedom of the designer would be limited in light of consumers’ expectations. As a result, small differences would play an important role in creating a different overall impression and, thus, in differentiating the remake from the original model.

The cancellation division of the EUIPO, the Board of Appeal and, more recently, the EU General Court agreed that the essential characteristics of the RCDs, namely the shape of the car, the doors and the windows are identical in all the designs. Therefore, the overall impression of the RCDs is dominated by a structure similar to the prior German designs.

The EU General Court held that the informed user is a car passenger in general, not a Porsche 911 user. Similarly, the freedom of the designer may certainly be limited by technical constraints, such as the number of mirrors that a car should have, but no additional limitations derive from the fact that the Porsche 911 is an iconic design and consumers may have certain expectations regarding the shape or appearance of that car.

On 6 June 2019, the EU General Court confirmed cancellation of the RCDs and, although the German designs will still be in force for a few years, the claimant may soon be able to reproduce the Porsche 911 without paying a licence fee to Porsche.

Although these decisions aim to prevent a registered design from obtaining protection for more than 25 years, they will have a considerable impact in the automotive industry and other industries where “nostalgic” products may be the focus of a design strategy and, potentially, the next popular model product.

The decision suggests that, in order to obtain protection for an updated version of a “classic” design in Europe, consideration must be given to maintaining the iconic appeal while changing the overall impression of more than just a few features that would be noticed by a highly specialised user. This will be a challenge for designers who wish to maintain the authenticity and “retro” look of older products. As an alternative, designers may consider registering parts of a new design in addition to the design as a whole, and considering their options to assert unregistered design rights in the first three years of disclosure, to attempt to prevent third parties from reproducing a (not so) new design.

Serena Totino is an associate in the firm’s London office, where she is a member of the IP Procurement and Portfolio Management practice group. Ms. Totino manages the trademark and design portfolio of international companies, advising clients on infringements, invalidation actions and international filing strategies. In addition, she has experience in negotiating and drafting IP related agreements and has worked on a range of copyright and domain name matters.

Arthur Artinian is a Partner in the firm’s London office and head of the London IP and Technology Transactions practice. Mr. Artinian is an internationally recognised intellectual property lawyer, and advises on contentious and non-contentious trade mark, copyright, design, e-commerce, advertising, licensing, commercial and data privacy matters. He has been fortunate to work with many iconic brands on their strategic IP projects across multiple jurisdictions. Clients rely on his experience in complex cross-border IP counselling, litigation, enforcement and transactional...