NexusCard Seeks Wonderland in Georgia After Alice Motion in Texas

NexusCard, Inc. (“NexusCard”), a California corporation with its principal place of business in Lake Forest, California, filed a patent infringement action on August 18, 2015, against grocery chain Winn-Dixie Stores, Inc. (“Winn-Dixie”), a Florida corporation, with a principal place of business in Jacksonville, Florida, relating to 5,924,080 (the ‘080 Patent) directed to a computerized discount redemption system, which published on July 13, 1999.  Figure 1 from the ‘080 Patent is reproduced below: 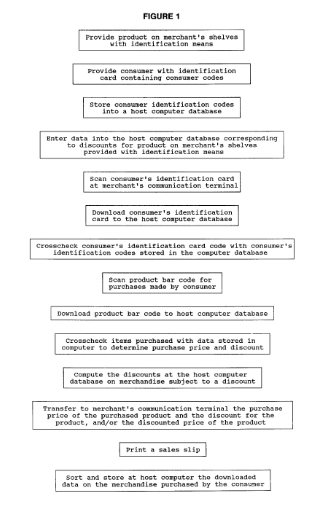 NexusCard asserts that the Winn-Dixie Rewards Program incorporates all the elements of several claims of the ‘080 Patent.  As can be seen from Figure 1 above, the ‘080 Patent details the steps routinely employed in seemingly all retail point-of-sale rewards programs.  In addition, other claims of the '080 patent cover related activities such as advertising the program and analyzing the data.

The prayer for relief does not seek lost profits, a recovery for willful infringement, or a finding that the case is exceptional.  Instead, NexusCard merely seeks a reasonable royalty plus prejudgment and post-judgment interest plus “such other and further relief as the Court may deem just and proper."

In June, NexusCard filed similar suits against other grocery and pharmacy chains, including Kroger, Walgreens, and CVS, in the Eastern District of Texas.  Several of those cases have already been settled and dismissed, but Kroger opted to file a motion to dismiss on the basis that the '080 patent is directed to unpatentable subject matter and therefore is invalid under 35 U.S.C. § 101 in view of the Supreme Court's guidance in Alice Corp. Pty. Ltd. v. CLS Bank Int'l, 134 S. Ct. 2347 (2014) and decisions of other courts following Alice.  A defendant in a separate case filed a similar motion to dismiss, and also asserted that NexusCard failed to state a plausible claim for direct or indirect infringement.  NexusCard filed the current suit against Winn-Dixie while those motions to dismiss were pending, showing no hesitation to move forward despite any concerns raised as to the '080 patent's validity in the Texas suits.