Nonobviousness of Commercially Successful Designs: Mmm, Mmm, Not So Fast

It is said that Andy Warhol painted the famous Campbell’s Soup Cans after an art gallery proprietor told him to paint “something you see every day and something that everybody would recognize.” While Mr. Warhol’s Campbell’s Soup Can is now obviously quintessential pop art, so too are the grocery store displays used to sell those soup cans according to the U.S. Court of Appeals for the Federal Circuit. Last week, the Court clarified how the objective indicia of nonobviousness should be applied to successful and praise-worthy soup can displays. Campbell Soup Co. v. Gamon Plus, Inc., Nos. 2020-2344, 2021-1019, 2021 U.S. App. LEXIS 24760 (Fed. Cir. Aug. 19, 2021).

Campbell Soup Company (“Campbell”) and its affiliates were accused of infringing two of Gamon Plus, Inc.’s (“Gamon”) design patents for a vertical gravity feed dispenser. For years Campbell used Gamon’s product, called the iQ Maximizer, praised it publicly, and attributed to it Cambell’s success in the market. However, Campbell changed to a different supplier of gravity feed dispensers which prompted Gamon to bring suit for patent infringement. Campbell responded by petitioning for inter partes reviews of the two design patents. A comparison of the claimed design and the prior art is depicted below. The Patent Trial and Appeal Board (the “Board”) ultimately determined that Campbell failed to prove unpatentability because, although the prior art has the same overall visual appearance as the claimed designs, this was outweighed by objective indicia of nonobviousness. Id. at 5-7. 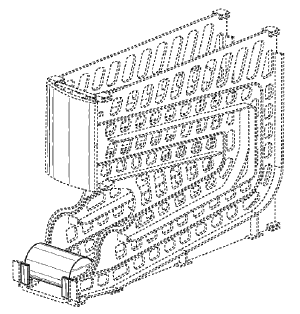 As the Court highlighted and as depicted below, the differences between what is claimed in the design (shown in solid lines) and what is unclaimed (shown in dashed lines) is very significant in this case.

According to the Court, the Board erred by analyzing whether the unclaimed features were insignificant to the “ornamental design.” Id. at 11. Ornamentality is typically central to the analysis of design patents. But the “coextensiveness” test—which does not distinguish between design patents and utility patents—asks “whether the unclaimed features are ‘insignificant,’ period.” Id. As shown above, the claimed design covers only a small portion of the entire product: the label area, cylindrical object, and stops. However, the entire rearward rails and side portions are unclaimed. It was not disputed that those other structures are significant because they facilitate the loading and dispensing of soup cans. Id. After applying the correct standard, the Court held that the commercial embodiment is not coextensive with the claimed design. Id. at 11-12.

A Trademark by Any Other Name: Why the UGG Brand Left Some Australians Saying “Ugh”
By
Jeanne Hamburg
Ownership of Inventions By Former Employers: Lessons after Bio-Rad v. ITC
By
Sarah M. Cork, Ph.D.
A Preamble Held Limiting Based on the Patentee’s Arguments in a Prior Appeal and File History
By
Shannon M. Patrick
Footnote Doesn’t Preserve Claim Construction Argument, but Patent Owner Must Observe “nose of Wax” Principle
By
David Mlaver
Advertisement

Adam is an experienced IP litigator who primarily serves pharmaceutical, medical, high tech, and defense industry clients. He handles patent, trademark, and trade secret matters for innovators and investors. Adam has a strong record of success in multiparty, highly contested Hatch-Waxman litigation, in addition to other litigations involving advanced biochemistry, polymers, optics, manufacturing processes, and electronics. He has tried cases before multiple US district courts, briefed and argued cases before the US Court of Appeals for the Federal Circuit, and briefed bet-the-company...

Peter’s practice involves intellectual property enforcement and defense, and client counseling on issues related to IP rights. Peter's primary focus is in patent litigation where he has experience in every phase from pre-suit investigations through appeal, including, initial evaluation and case initiation, fact and expert discovery, pre-and post-trial motion practice, and trials and appeals. In addition to suits centered on the assertion and defense of infringement claims, Peter has experience with the successful resolution of multiple inventorship disputes and related misappropriation...

Before joining Mintz Levin, Serge worked for TomTom, Inc., where he interfaced between product management and engineering departments in coordinating beta testing of both software and hardware products.

During law school, Serge served as President of the Intellectual Property Law Association and as Managing Business Editor of the New England...